Android Wear, or Wear OS as it's now known, seems to have found renewed momentum lately with fresh efforts in fitness, updates to the interface, and new hardware coming on the horizon. The latest update brings one notable change the improves the interface for managing notifications, but also carries with it the signs of many other changes and additions to come. 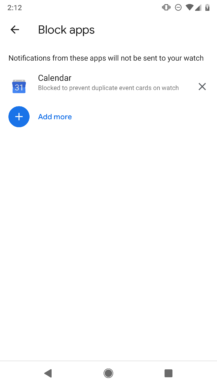 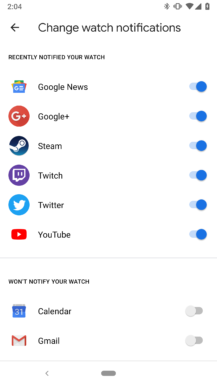 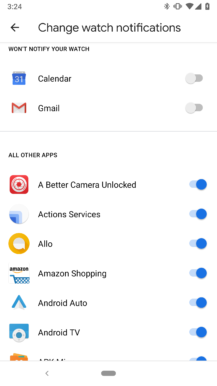 The value of smartwatches will basically live and die by how well notifications are displayed, and perhaps just as importantly, how easily users can filter those notifications. The latest update makes that situation a little more user-friendly with a revised screen for filtering the apps that get to send notifications to your watch.

Version 2.16 now includes a list of the apps that recently sent notifications to your watch, making it easy to turn off any that are bothering you. Aside from that, the new layout isn't functionally different, but it's much more pleasant to use and browse. Instead of asking users to add items to the list one-by-one, there is simply a long list of the apps installed on your device, each with a toggle switch to its right for disabling apps before they can become a nuisance.

While there were improvements to standard notification management, there's a whole separate level of detail that's about to see improvements: Contacts. Whether it's your family members, best friends, or your boss, there are some people that simply can't be ignored. A new feature is in the works that will allow users to put favorite contacts onto a list that will get higher priority than others.

Unfortunately, for contact filtering to work, each app must be supported. It's not entirely clear if this means the apps have to conform to a specific format in notifications or use a specific API, or perhaps the Wear team will have to bake in custom support for individual apps. I assume we'll get more details about this when Google announces the official changelog for this Wear update.

Ever since the introduction of Complications to Android Wear, there has been a complication that shows your watch's battery level. However, if you wanted to see your phone's battery level, you would need a third party application. Google will be getting around to changing that situation soon enough, and we'll all get to see both our watch and phone battery levels on the small screen strapped to our wrists.

Media controls will be optional

When music or other audio is playing on your phone, Wear inserts a card into your stream with playback controls ready to pause or skip as you like. Of course, if you don't like those controls, it might be pretty annoying that the card can't be dismissed. Sometime soon, that may not be the case, Google is making the controls optional.

This isn't a simple case of making the media controls dismissable, they'll actually be entirely optional. Users will be able to change an autolaunch setting to prevent media controls from appearing.

This is all pretty straightforward, but there is an interesting bonus detail. Two different messages explain how the controls can be turned back on. One of these instructs users to go to Settings -> General while the other mentions a "Media controls app." I haven't seen an app with a name like that yet, but maybe we should be expecting that too.

Just last month, Google announced new and upcoming changes to Wear. The highlights were generally organized around health and fitness, but also included key details about some overall interface changes. Among those changes will be a revised quick settings panel with 6 buttons. I will come back to the quick settings in a moment, but I wanted to start with the battery saver modes that will be accessible from the shade.

The details are basically as you might expect, but there are three different lines of text that describe the function a bit differently, which likely relates to the different ways some watches will implement battery saver. To my eyes, it sounds like there's a mode that simply turns off power-hungry features, a mode that effectively puts the watch into a deeper idle state, and a final mode that sounds more like it's dual booting between a super-low power state and the regular mode:

Back to the subject of quick settings, an updated retail will be featuring this panel quite heavily. Both phones and watches have supported a special retail mode for a few years, basically running through a series of screens that advertise the features Google provides so onlookers can watch the show before buying the gadget. There's really nothing exceedingly new there, but here are some of the highlights that will be demoed in Wear's retail mode, and they all come from quick settings. Here are the 6 buttons and the text that describes them:

Demo mode will also include a card featuring expected durations for commutes.

Android Wear already features quite a bit of Assistant-enabled stuff, and even where it's not technically native, most of it is fed from the phone to the the watch in the form of notifications. In the latest update, there are nearly 200 new lines relating to features we know and use in Assistant on the phone. Aside from their presence, there's really not much to say about these, so I'll just list the overall features for the sake of simplicity:

I know many of these already appear on watches, and I think it's likely some of this might be here to better show off the demo mode discussed above, but there's so much here that I don't want to leave it without acknowledging the addition.

[Update: Showing in Always On Display too] Pixel 3 live wallpapers are available to download ...

Nokia 5.1 Plus announced in India, with a notched 5.8" display, MTK Helio P60, and dual rear cameras