Talk about a stacked Tuesday. First, a full HD port of Monster Hunter World Stories releases on the Play Store, and then Level-5 announces that Professor Layton and the Curious Village has been ported to Android, complete with an HD makeover, and it's also available on the Play Store starting today. There's already a couple of Layton games on Android, though this is the first to actually star Professor Layton. It's also the first game in the main series, so if you'd like to see where it all began, this is the title for you.

Professor Layton and the Curious Village was originally released on the Nintendo DS back in 2007. The game is centered around Professor Hershel Layton and his young apprentice Luke Triton as they take on the task of investigating the fictional village of St. Mystere and an artifact known as the Golden Apple. As you examine the town's residents, you run across many different brain-teasers that need solving, usually as a favor in exchange for cooperation with your investigation. There are over 100 puzzles to solve, not to mention plenty of engaging mini-games and interesting side characters to discover.

Since this is an HD port, you can expect a few changes from the original DS release. Obviously, the graphics have been updated so that they look great on phones and tablets alike. Additionally, you'll find new and exclusive, never-before-seen animation footage. Of course, some things haven't been touched, such as the fantastic soundtrack that perfectly captures the mood of Layton’s world.

You can snag Professor Layton and the Curious Village off the Play Store for $9.99, and there are no advertisements or in-app purchases included. This is a premium release. Sadly there is no demo, so you'll have to go into this sight unseen if you've never played before. Oh, and once you get this fully installed, you can play offline, which is excellent for all you commuters out there. 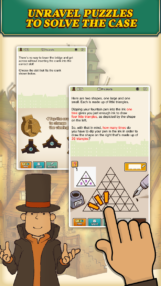 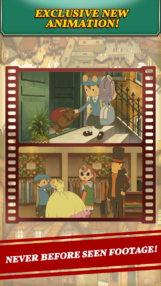 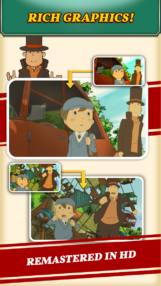 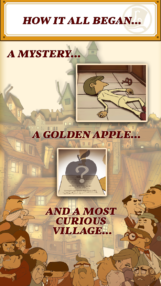 If you are a puzzle fan, or simply enjoy artful story-driven games, Professor Layton and the Curious Village is up there with the best of the best. It's one of the main reasons Level-5 is such a well-known studio, and now that an HD version of their first Layton game is available, everyone can revel in its audio and visual splendor in a way never before possible. So while this is indeed an eleven-year-old title, it's still one of the best puzzle adventures you'll ever get to play. It shouldn't be missed. Below are widgets that connect to the US and EU versions of the game. 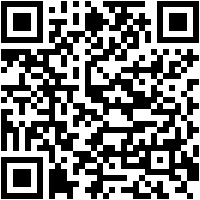 Professor Layton and the Curious Village is coming today to mobile!

Los Angeles, USA, September 25th, 2018 – LEVEL-5 is extremely excited to announce the release of the remastered adventure puzzle game Professor Layton and the Curious Village on iOS and Android platform.
With over 17 million units sold worldwide, discover the original title that heralded the puzzle-adventure genre and launched a legacy. Digitally remastered in HD for mobile devices and with new, never-before-seen animated cut-scenes, it’s time to run the cerebral marathon with Professor Layton and the Curious Village.
The tale begins as Professor Layton, a true English gentleman and famous archaeologist, and his apprentice, Luke, drive towards the remote town of St. Mystere in response to a request from the widow of a wealthy baron. The baron’s will indicates that the family treasure, the golden apple, is hidden somewhere within the village and whoever finds it will inherit the whole of the Reinhold estate. The Professor and Luke must search the town for clues leading to the precious heirloom.

The game features a very distinctive art style that looks charmingly old-fashioned and brings life to the game’s characters. Now in HD, the animated cutscenes highlight important events in gorgeous detail. The original soundtrack, beloved by many players, captures the mood of Layton’s world and resonates with the emotions of the player.

Whether you are obsessed with mind-bending puzzles or the beautifully intertwined animated mystery, Professor Layton and the Curious Village is for you!

• Discover the adventure that started it all!
• Exclusive, never-before-seen animation footage.
• Beautifully remastered in HD for mobile devices!

A review code will be provided upon request. Simply reply to this email specifying the operating system and the region.

About LEVEL-5 Inc.
LEVEL-5 Inc. plans, creates, and markets video game software and produces mega-hit IPs targeting kids around the world. The company specializes in cross-media strategies and oversees corresponding counterparts (anime, toys, manga, etc.) for its titles. The company’s flagship LAYTON™ series has sold more than 17 million units worldwide, The Ni no Kuni™ series, featuring animations created the Academy Award-winning Studio Ghibli, has sold more than 1.4 million titles worldwide and has received numerous prominent game awards. LEVEL-5's cross-media titles include INAZUMA ELEVEN™, Little Battlers eXperience, and YO-KAI WATCH™ – which has sold over 11 million copies of its games worldwide. All forms of YO-KAI WATCH™ merchandise, including toys and games, are universally popular among people of all ages. While maintaining its foundation as a game company, LEVEL-5 Inc. continues to actively explore collaborations with other media as it strives to flourish as a world-class entertainment brand. To learn more, please visit http://level5abby.com.

Android Messages' search feature is getting an overhaul this week