Daredevils open your wallets: GoPro announced three new cameras on Thursday with the Hero7 line. With a price range of $200 - $400, GoPro’s Hero7 line provides power and performance updates over the previous Hero6 lineup. The flagship Hero7 Black is distinguished visually as the only model featuring a front-facing LCD screen.

In addition to the information screen on the front, the Hero7 Black ushers in several firsts for GoPro:

The Silver and White models each sport 10MP sensors, with the White model limited to 1080p video while the Silver jumps up to 4K and adds GPS. All of them feature the same waterproofing and touchscreens as the previous Hero6 generation. 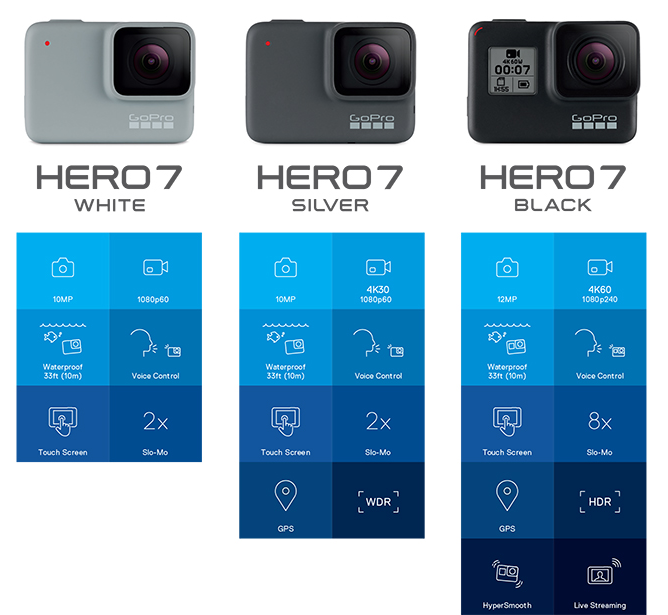 To achieve such results, the Hero7 Black continues to use GoPro’s GP1 processor. It is also the only model to record at 4K 60 frames per second; the silver and white models only manage 30 frames per second. The Hero7 Black distinguishes itself further with 240 frames-per-second, 1080p slow motion video, whereas the lower models are limited to 60 frames-per-second slow motion.

It’s not only the imaging capabilities which are improved — GoPro re-engineered the audio capabilities of the Hero7 Black to expand the dynamic range. A new microphone membrane serves to cancel out vibrations caused while the unit is mounted. GPS is notably lacking from the Hero7 White, as is wide dynamic range photography (WDR), not be mistaken for HDR, which is found only in the Black edition. Splurging for the Hero7 Black also gives you a 12MP sensor, up from 10MP on the other two models.

The Hero7 line is available for preorder from GoPro and other retailers, with expected in-store availability on Sept. 27 internationally, and on Sept. 30 in the U.S. The Hero7 White will retail for $200, the Silver at $300, and the Black at $400.