Customization options for Google's search widget first started to appear all the way back in 2017 before being unceremoniously yoinked. Hints of its return cropped up in a teardown earlier this month, and based on numerous reports and our own experiences over the last few days here at Android Police, it's back again.

The new setting is accessible not via a launcher's settings, as you might expect, but in the Google app. So far as I can tell, even phones I have running week-old versions of the Google app have the new feature, so it must have been remotely enabled by a server-side switch/flag change. That means you shouldn't need any specific new update to get the customization options, so long as you're running a recent version of the app. 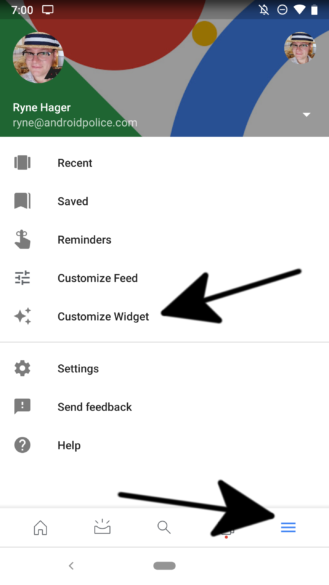 To change the search bar widget settings for yourself, head to the Google app, tap the fifth tab all the way to the right of the navigation bar at the bottom and tap "Customize Widget" in the list of options that appears. That will take you to pretty simple, four-category customization screen. The four options for the search widget that you can change are the logo (full Google logo or G), shape (square, round corners, and round), color, and transparency/shading. The options are wide enough to cover the spectrum from tasteful to garish as your heart may desire. In all, the options are pretty much the same as we saw last year, so if you played with it then, you should already be familiar with it.

Unfortunately, the Google search widget built into many third-party launchers doesn't pick up the cues the Google app is laying down. Although all my phones seem to have the new functionality in the Google app, none of those using the Rootless Launcher pick up on the change in settings for the default search widget — though we're told Action Launcher and other first-party OEM launchers have no problems figuring things out. If you manually added the search widget to your homescreen, it should work regardless of your launcher. It's possible the built-in Google search widget in other Launcher 3-based launchers may work as well, but we can't confirm.

Google has updated its support docs to highlight widget-customization functionality.

Telltale Games is reportedly closing down and cancelling most current projects [Update: Confirmed]