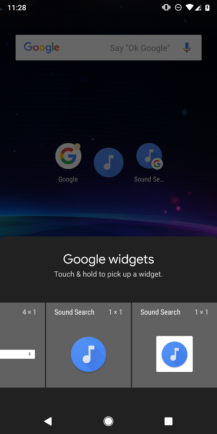 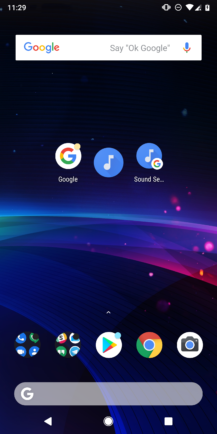 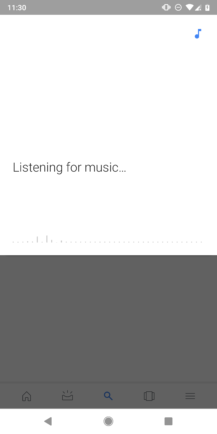 A new Sound Search widget has been added to the Google app, though it doesn't appear to differ in any functional way from the older widget, which is also still present. Visually, the two are actually quite a bit different. The older version had no label or logo on it, just a single musical note. The new widget is actually named Sound Search and aligns with the standard icon baseline, plus it will carry the Google logo as a badge on the Pixel Launcher (and other launchers if supported). Regardless of the looks, they launch the same window to listen for music, so you're free to pick whichever widget fits the aesthetics of your home screen.

Google launched its podcast player without... well, without features. So now those are getting filled in as the team gets around to them. One of the obvious first steps is auto-downloading podcasts so users won't have to do it all for themselves.

There's not much here to look at, but the key details are labeled. You'll be able to automatically download new episodes, and there's an option to restrict downloads until you're on WiFi. Were you expecting more? You probably shouldn't be.

At least for the moment, this is about as extensive as the options appear to be, though there are probably more on the way. I would at least expect to see a limit on the number of new episodes that are allowed to stack up, which is fairly standard on most other podcast players.

You'll also gain the ability to share your favorite podcasts with others. A Share command appears to also be on the plate for the interface, but hasn't been added yet.

A new menu item for the navigation drawer has been added. This one is called Your Contributions. Unfortunately, there's not much more to see at this time. It's basically just a placeholder until more is added.

There are a few things that might appear in a page about contributions, but the most obvious would be the screen in Google Maps that goes by the same name. That page holds reviews, photos, ratings, and so on. The remaining possibilities are considerably more niche or don't really make sense in this context, like Crowdsource, Opinion Rewards, or YouTube. On the other hand, Google may be planning to launch new features that would encourage users to provide feedback or new content that would belong here.

We've been following the progression of a feature called Google Assistant for Households (or perhaps Family Sharing) for a while as it appeared in both the Google and Home apps. The latest update doesn't provide much new information, but in a small promotional line, it does reveal that members of a household will be able to send messages to other family members, assign reminders, and share lists.

There's no secret that the Pixel Stand will be one of the featured accessories launching with the Pixel 3, and it's already something of a foregone conclusion that it's going to have the phone behave a bit like a smart display. In the latest update, Google slipped in a new animation showing a phone propped in the stand as it carries out a slideshow of photos from its gallery. This obviously isn't revealing anything we didn't already know, but it's sorta cute.

Oh, and as if to rub a little salt in the wound, note that the phone is lacks both bezels and a notch. Someday, Google, but not today.

Telltale Games is reportedly closing down and cancelling most current projects [Update: Confirmed]