Magecart exploited the Newegg checkout process with JavaScript similar to the code used in their hacking of British Airways. Only 15 lines of code were needed to skim the card data. The code stole customer data from the Billing Information page and transmitted it back to privately-registered domain neweggstats.com. 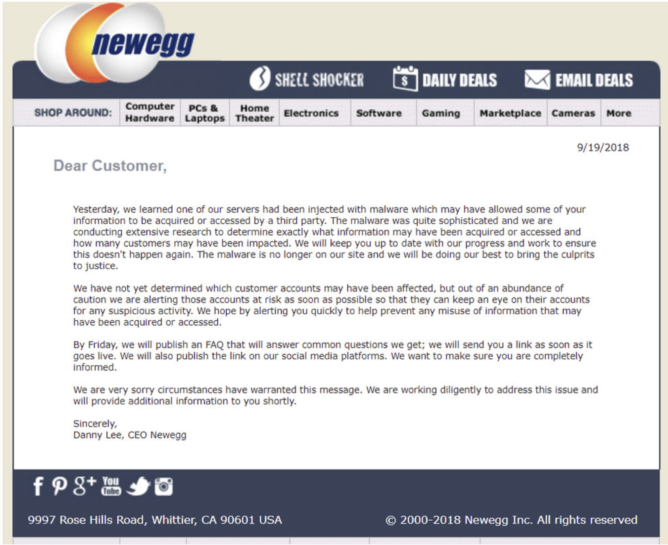 The domain was registered on August 13th, likely after the website was already compromised. Three days later, the attack was executed on newegg.com. The use of a similar domain, which also carried an SSL certificate issued on August 13th, allowed the code to go unnoticed. Critically, JavaScript used in the attack affected customers on both desktop and mobile devices. Magecart continues to follow a pattern of targeting customer information directly through malicious code rather than hacking company databases.

Newegg, a multibillion dollar company with 50 million customers per month, began notifying customers who made purchases during the one-month period via email Wednesday. It also plans to publish an FAQ on its website on Friday.

If you've shopped recently at Newegg, you should monitor your bank account for fraudulent activity. Considering that your complete card information is now compromised, it would also be prudent to turn off your card and request a new one from your banking institution. You may not notice unusual charges right away, but it would not be uncommon for your card information to be used in the future, or sold to other malicious parties.

[Update: Many more countries] Google Play Family Library is going live for some users in India