In Slightly Heroes, you play as one of several cartoon characters in a 1v1 arena. You can play with people from all around the world, with your friends, or with bots. You'll probably be playing with bots most of the time. There are two characters and one weapon available at the start, and you'll earn more as you progress. The art style is appealing, and it's very clear Hatrabbit put a great deal of effort into the game.

My main complaint with Slightly Heroes are the controls. I realize the Daydream controller only has two usable buttons and a directional pad, but trying to walk around is almost disorienting. The circle pad changes what direction you're walking in (like WSAD on a keyboard), and you have to physically move your head to look around you.

Instead of selecting a target to teleport to, like with most VR shooters, you have to hold down a direction on the Daydream controller while moving your head. It's confusing at best, and physically disorienting at worst. If you stop moving at any point, you become an instant target. 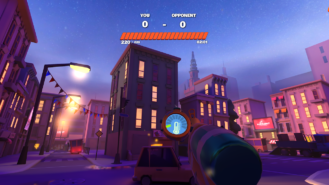 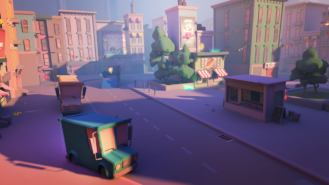 My other main issue with Slightly Heroes is the spawning mechanism. The respawn points don't seem to be far enough away from other players or bots. On several occasions, I spawned very close to the bot that killed me a few seconds ago, so the character could kill me again before I had a chance to move away.

If Hatrabbit can somehow make the controls better, this will be a great Daydream VR game. The company says the title will arrive on other platforms "later this year," which should boost the number of actual people playing.