I confess it's taken some time to review the BEAM. The company sent it to us earlier this year, but we ran into some trouble at the time getting it to work reliably, and my attention was later diverted (i.e., I forgot to check back and see if things changed after updates). Those issues seem to be resolved, so I'm back to enjoying my daily dose of GIFs.

In that time, BEAM's approach to its product has changed, and the company seems to be in the middle of a remarketing effort. Originally the BEAM was being pushed for activists/protests, now BEAM's site has the corporate focus front and center, describing it as a "wearable dynamic display" and "powered by our SaaS Platform." (That's "software as a service," for the uninitiated.) Those might be two potential markets, but in my opinion, BEAM is ignoring the silent and unlikely majority: people who want to strap a GIF to their chest.

Another thing I need to get out of the way is the many obnoxious types of Beam. BEAM is the company, BEAM calls its physical product the BEAM, it calls GIFs and other static content Beams, and it calls the act of transmitting or playing back that GIF Beaming. So you Beam Beams to BEAM's BEAM... Yeah. 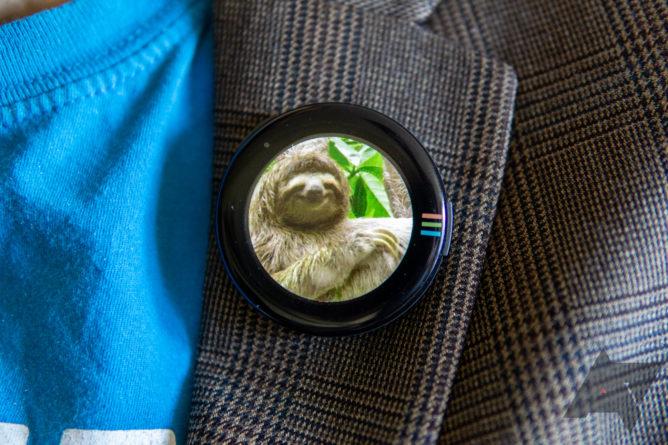 Like some lower-end OLED panels, you get some color shifting at angles past 45 degrees or so. Sometimes it also seemed like the BEAM wasn't able to maintain v-sync on my GIFs, even if they were a lower framerate. Granted, on a screen so small, you can't really see the tearing unless you're paying close attention, and more than a foot away such inconsistencies are invisible.

The BEAM has two buttons. The one on the right by the three colored lines cycles "beams" while the other shows the current battery level on a short press, and turns the BEAM off on a long press. A Micro-USB port for charging and manual firmware updating is at the center bottom edge.

The front is glossy clear plastic with a one piece black border/bezel. It also comes in white, if that's your preference. A barely-visible light sensor is also embedded at around 10 o'clock for the automatic brightness setting. 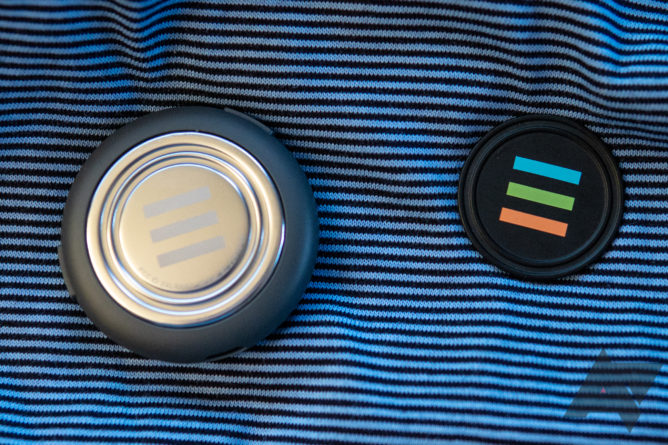 The back is a matte black plastic ring encircling a mostly flat steel plate, which pairs with a two-part magnetic receptacle, itself a pair of magnets which secure to your coat, jacket, shirt, bag, or whatever.

The magnets are stronger than I figured, with the two pieces able to hold together through fabric up to 7-8mm thick. At that point, it was pretty easy to pull apart, so it might not be wise to wear it through the lapel of your 3/4 length winter coat, but it still worked. Anything up to, say, sweater or jacket thickness should be no problem.

How to use it

Pairing the BEAM and sending it GIFs used to be a bit more tedious, but subsequent updates have made it simpler. Install and create an account in the app, go to your profile tab at the bottom (the silhouette of a head and shoulders), tap the settings cog, and tap "Pair Beam Button." If Bluetooth is on, it'll find it and offer you the chance to give it a name. Options go a lot further down on this screen.

Once paired, that same settings menu changes to offer an overwhelming set of options. That's sort of a common theme in the Beam app. For such a simple device, it has way too many user-facing settings. In fact, the app was even rougher around the edges earlier this year, but now I think most people can figure out how to use it without a manual. It still feels like an engineering project that went commercial more than a consumer-facing app, though.

Beam takes ages to "Beam" your "Beams" to it, which is a bit annoying. To make and send a Beam to your BEAM (sigh), just tap the paintbrush icon in the app's navigation bar. From there you can either take a photo to send that to your BEAM, or select from the icon options below the shutter, which include solid colors, selecting other content from your device, pulling photos from a quick image search, or downloading GIFs from Giphy.

Whatever you select, the process is pretty simple. Just crop the image or GIF in the editor the way you'd like it to be displayed and select an optional background color. The BEAM app will dump you to a slightly nightmarish configuration panel with no less than six tabs for adding things like text overlays, borders, filters, and adjusting levels on brightness, contrast, exposure, etc.

It's a lot to take in, but you don't need to use any of it if you don't want to. Tap Save and the GIF or photo is generated, and another tap of the "BEAM" icon sends it to your BEAM. You can also add a description, tag, and URL to what you've created if you plan on letting other people in the BEAM app see it, as there is a social tab (the default app view) which shows you other Beams people have shared.

Once you're loaded up on Beams, toss it on your jacket, bag, or shirt and tap the side button to cycle through them.

Yeah. The BEAM isn't for everyone, but it's pretty fun in small doses, and I have no problem recommending it for $85 considering what it does.

Paring and sending GIFs or other content to the BEAM used to be more annoying at the beginning of the year, and the BEAM itself would frequently bug out during the transmission process, but it's much better now. The app still has way too many settings, but if you can ignore the volumes of superfluous sliders, it's fine. The time it takes to send "Beams" also seems too long to just transfer a couple megabytes over Bluetooth.

BEAM is halfheartedly pushing some sort of pointless social aspect front and center, with a Beam-filled content feed as the primary screen in the app. Combined with the activism and SaaS business angle, it seems like BEAM doesn't have any real marketing strategy, just a product it doesn't know how to sell. As far as I'm concerned, the BEAM is just a funny curiosity and party favor, and that's all it really needs to be.

99% of people won't be interested in the BEAM, and that's totally fine. It's probably the single least necessary wearable ever and nothing more than a humorous luxury. But if you have the budget to waste $85 on GIFs, the BEAM is sure to make you the most obnoxious guy at the party.

It only lasts a day (at best) on a charge, it has no touchscreen or on-device apps, and it's a bit tedious to set up. But, you can have a funny GIF on your jacket for just $85.

The BEAM is available in both black and white from BEAM's storefront for $85.