I'll be honest - when we were first contacted about checking the new Tribit X-Boom out, I wasn't expecting much from it. I had never heard of the company, and the design looked a little cartoonish. On top of all that, the $69.99 price tag was much lower than competing models from companies like UE and JBL. But after using it, I've learned that the phrase "don't judge a book by its cover" is quite appropriate here.

Don't get me wrong; the X-Boom isn't perfect. I still think that the design is a bit odd, and it's pretty barren in terms of features. In the areas that matter, though, this thing can put speakers that cost twice as much to shame.

There are a lot of things I like about the X-Boom, but the design isn't one of them. This thing definitely follows function over form, with its rugged look and the three oversized, cartoonish buttons. That's good, but I can't help but think that the giant white buttons up front could have been made a bit more aesthetically pleasing. The buttons themselves (volume up, play/pause, and volume down) are nice and tactile, though. I'm also not a fan of the silicone carrying strap up top, which doesn't seem to be removable. I much prefer Ultimate Ears' approach of a metal ring hidden on the bottom. That being said, you could just cut it off if it really bothered you. 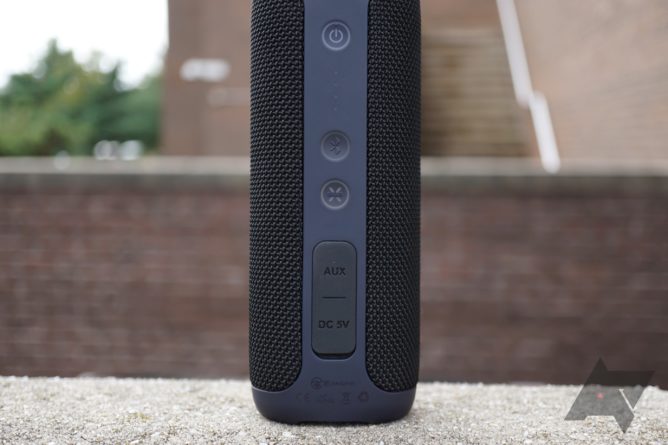 Out back, from top to bottom, there's a power button, four tiny circles to indicate battery level, a Bluetooth pairing button, an "XBASS" button (guess what that does), and lastly, a giant flap covering the aux and Micro-USB charging ports. That flap is necessary for the IPX7 water (but not dust) resistance, which most speakers in this category have. Unfortunately, it's actually pretty hard to pull off, even with longer fingernails, but I suppose that's better than the speaker getting water inside. 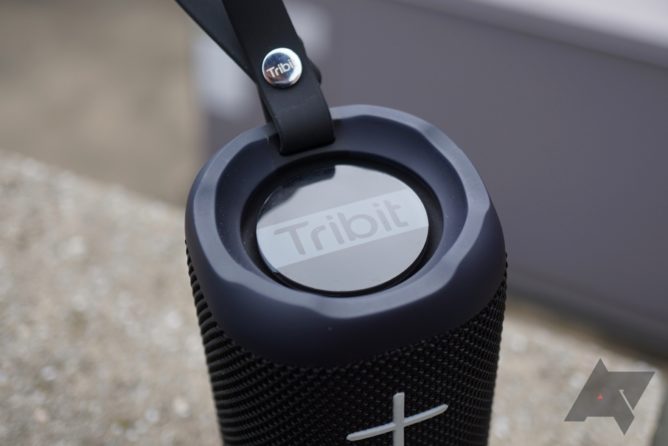 The top and bottom have an interesting party trick: they visually bump to the bass, just like with actual speakers. As expected, they don't move much at low volumes, but they really start shaking when you crank it up, especially when the XBASS button is pushed.

While I do like the functionality that this design offers, the X-Boom can't be considered a looker. Then again, that's not a major consideration for most people when they're looking to buy a Bluetooth speaker. 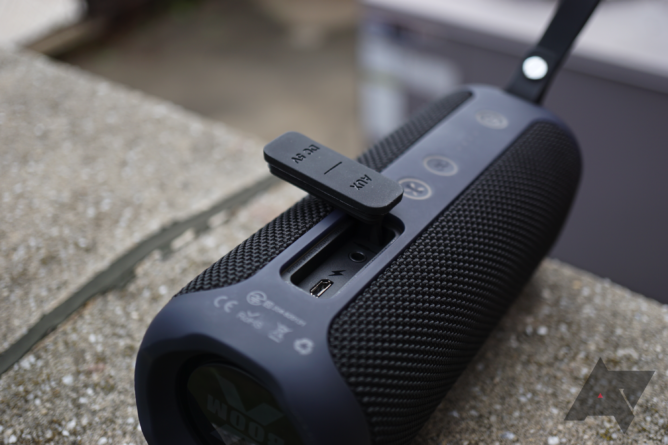 Like most of these speakers, the X-Boom is recharged with a Micro-USB cable (a really crappy one is included in the box). Input is rated at 5V/2A, so that happens pretty quickly, but you will have to deal with an enormous flap over it (and the aux port) every time. I get that this is for water resistance, but this one is almost impossible to open if you don't have longer fingernails. I usually had to grab something to pry the flap open.

Tribit claims that the X-Boom's 5,200mAh battery will last up to 20 hours. Given that the battery has nearly double the capacity of the BOOM 2's 2,800mAh pack, which UE claims 15 hours for, I have no trouble believing this. But as always, your battery life will vary depending on volume, idle time, and other factors, so it's difficult to give a hard number. I can tell you, though, that I haven't once worried about the X-Boom's battery life when taking it places.

This is where the X-Boom really shines. My baselines for speakers in this category are UE's BLAST and last-gen BOOM speakers, so be prepared for comparisons to those. I'm pleased to say that the X-Boom compares very favorably to those, despite costing quite a bit less than them.

The X-Boom's sound is very clear and well-balanced. Neither the UE BOOM 2 nor the BLAST stack up to the X-Boom in this regard, though they do get noticeably louder. That being said, the X-Boom still gets plenty loud, and sound quality at those high volumes for any of these speakers isn't pretty anyway. The 360-degree design and dual 12W drivers allow sound to go in all directions, but it still sounds great to a sole listener. 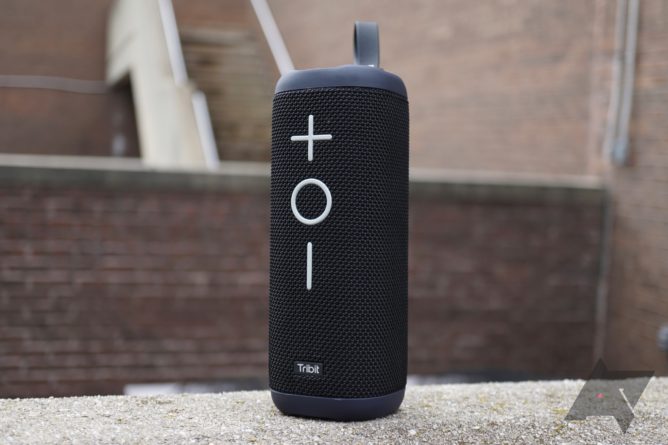 Bass on the X-Boom, especially with the XBASS option turned on, is quite formidable. Neither the BOOM 2 nor the BLAST can match it, and I'd say that the thumps it produces are about even with the larger, much more expensive MEGABLAST's. This speaker punches well above its size and price range. 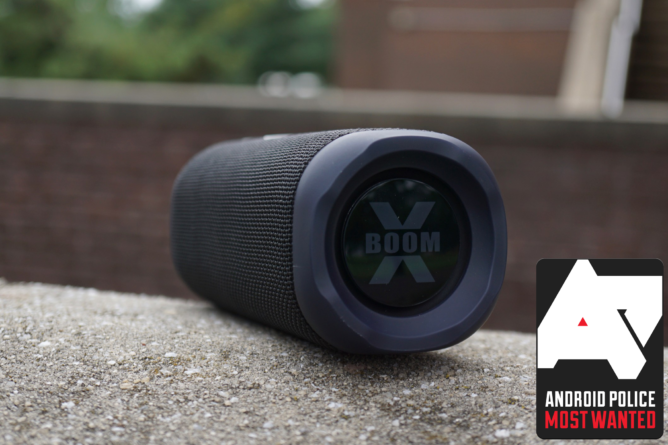 The unit I received initially had some serious latency issues; within 1-2 minutes of a video playing, the audio would be lagging quite severely. This seemed a bit odd to me, but Tribit told us that early units shipped with this buggy firmware, and would continue to until the old stock sold out in about a week. After I asked about this, Tribit sent over an updated firmware file. Flashing it was a bit of a chore, but it did end up fixing the latency.

For this reason, if you buy an X-Boom now (or less than a week after this review was published), you'll probably have to flash the new firmware. This is a big inconvenience as it requires a Windows machine, but here are the instructions, here's the firmware file, and here's the tool needed to flash the firmware.

The X-Boom only has two real features. The first is something that I've already mentioned quite a few times - the XBASS button. This button really does noticeably increase the bass, and I like that Tribit made it a convenient button right on the speaker. That's a lot easier than having to grab your phone and dig through an app.

The other feature is the ability to daisy-chain two X-Booms; unfortunately, I wasn't able to test this because I only have one. Since there's no companion app, there's no EQ, no Alexa integration, no remote control functions, etc. None of those features really matter to me (and probably most consumers), but given the many UE owners who were pissed by the removal of some, there are clearly people out there who care about them.

The Tribit X-Boom is a fantastic-sounding Bluetooth speaker. If all you care about is sheer audio quality for the money, this is a great buy at $69.99. I'm not a huge fan of the design, but that's not really a consideration for buyers of Bluetooth speakers, and it is very functional. It's also missing features that some of the bigger names have, as well as a companion app, but most people don't use those anyway. The latency is a big problem with early units, but wait a week or so and that should be a non-issue. We've also included files above for that.

What really matters is the audio quality, and the X-Boom scores high in all aspects of that department. The sound is crisp, the bass really thumps, and it gets loud enough. Plus, the XBASS button is conveniently located and actually works. And as trivial as it may look, the physical "bumping" of the top and bottom is pretty cool to my eyes.

Should you buy it? Yes. The X-Boom's $69.99 MSRP is far lower than, say, the UE BOOM 2 and BLAST. But even though both of those can now be had for around $100, often even less, I'd still go for the X-Boom if it were my money. Tribit somehow managed to make the X-Boom go head-to-head with larger, much more expensive speakers in the marketplace. Ultimate Ears just removed several features from the BOOM line anyway, so the feature difference isn't as large as it once was. If you're in the market for a Bluetooth speaker, I doubt much else will come close to the bang-for-buck that this offers.

Tribit is currently offering a 15% discount for its 1-year anniversary, bringing the price down to an even better $59.49. Use code XBOOM828 at checkout from now until September 29th to get the deal. Bear in mind, however, that early units will ship with the latency-riddled firmware, so I'd try waiting until the last few days to pick one up.

Gboard has a bug that screws up glide typing, but there's an easy fix