Like most phones these days, Google's Pixel devices have a battery saver mode that automatically kicks in when your charge level reaches a certain threshold. You can change the percentage at which battery saver activates, but apparently Google can do that, too. A substantial number of Pixel owners are reporting their phones have suddenly switched to battery saver mode when almost fully charged.

Battery saver conserves your juice by limiting background processes and keeping apps from refreshing until you open them. That's great, but it's not something you want enabled all the time. Mysteriously, many Pixel users found their phones' usual battery saver threshold had been altered today. They were set to 99%, which turned on battery saver immediately. 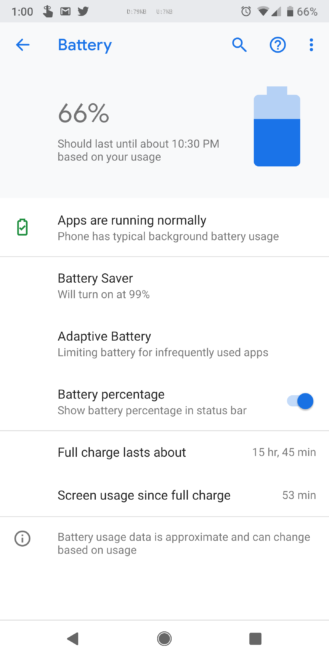 Several members of the AP team have confirmed this behavior. These devices were all awake and on the latest firmware version earlier today. I have a Pixel 2 XL that was off until just before this posting. After turning it on and letting it sit, my battery saver is still normal. That could indicate Google accidentally toggled some server-side setting that can alter battery saver on phones while mine was off.

Judging by the number of tips and comments we're seeing, this is a very widespread issue. You should be able to turn battery saver off and change the 99% activation threshold, but it's still bizarre Google can even make settings changes like this.

We've heard from readers that some other phones running Pie seem to have been affected as well. Reports include the Essential Phone, Nokia 7+ (P beta), and OnePlus 6 (P beta). Perhaps this is just a very strange bug in Android Pie.

The official Google Pixel account on Reddit says this was an internal experiment that was mistakenly deployed publicly. The settings have been reverted, so you shouldn't experience any further battery saver issues. However, it seems very odd that Google has the ability to change system settings remotely on Android devices. I'm sure many of you would like additional details about this. We've reached out to Google and will update if we have more information.

LG will announce the V40 ThinQ on October 3rd