The rollout of Google One was complicated. The service was announced and the app made available for download in May. Emails went out saying that the service was available to everyone in the US in the middle of August, but that still wasn't the case by the end of the month. Now, Google is trying to make amends by sending some users affected by the messy launch $5 Google Play credits.

Reader Abby let us know that Google sent her an email apologizing for the invite going out "a little too early" and thanking her for her patience, along with five bucks to spend on Google Play. Not bad. 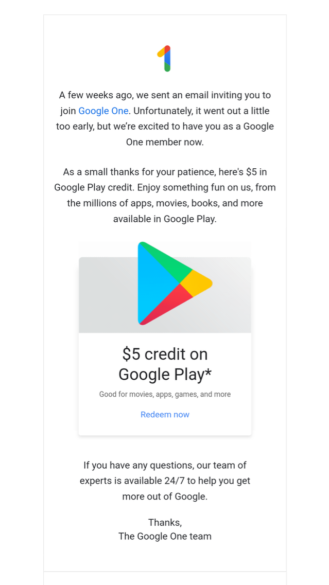 It seems the offer is only extended to users who had paid Google Drive plans and were invited to sign up for Google One before it was an option, then actually did so once they could. Google One's rollout was a pain, but it's hard to complain about free money.

Chaos Reborn: Adventures is a fantastic strategy RPG, but it will cost you