The Pixel 3 XL may be the most reliably leaked smartphone of 2018. It's been seen on a train, it's been accidentally left in a car, appeared in about a half dozen hotels and airports, and it's even been reviewed by a Russian blog that managed to get one of a handful of stolen units that showed up in Ukraine. So much has leaked about the phone that essentially all of that wonderful pre-launch mystery has been sapped, and a sobering (if predictable) reality has set in: Google's next phone is not really all that different from any other phone released in 2018. Also, it has a big, fat notch cut out of the screen.

Understandably, this has been something of a letdown. More than that, it has become the source of what I will politely call tech fan fiction on platforms like YouTube (which I will not be linking here, because these things need attention right now like South Carolina needs rain). And so, like a delusional forty-niner with a handful of glimmering dust and a good story, some of the internet has come to believe there must be gold in these hills. Specifically, that there must be a mythical, third Pixel device. Or that the Pixel 3 XL we've seen leaked isn't real at all, but is in fact an elaborate decoy. Or it is real, but they're actually not going to release it because everyone clearly hates it so much.

Actually, it's not even clear what the conspiracy - and let's call a spade a spade, this is a conspiracy theory - is. And that is one of the hallmarks of any conspiracy theory: the people in the know can't even come up with a consistent narrative for their flimsy alternative reality. Because there is absolutely no credible evidence that any of these theories hold water. None. Zilch. They rely on extremely unreliable hearsay (in my personal opinion, total bullshit) from someone who clearly possesses a bunch of stolen phones and very much wants everyone not to focus on that fact, and also on the innuendo and sometimes outright dumb "speculation" (which is not lying!) of YouTube personalities trying to grow their Brands. 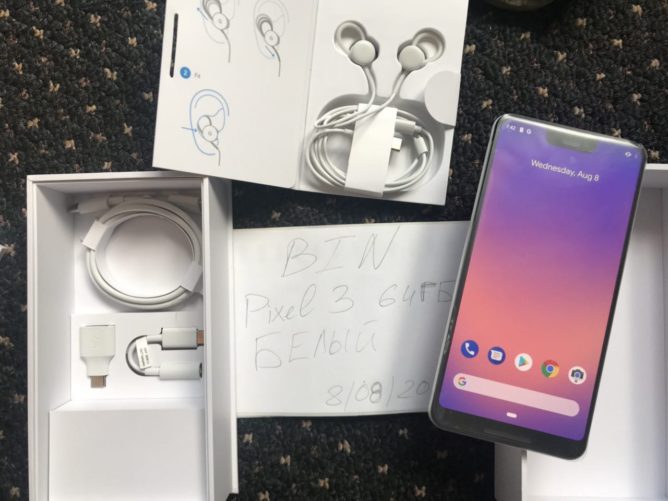 If you live in reality, this is the Pixel 3 XL. And its box. And the accessories that come with it.

And, without question, someone will show up to ask the inevitable, "but how do you know they're wrong?" Quite simply, because every piece of evidence we have says they are wrong. Stephen Hall did an excellent job breaking down the non-evidence of the conspiracy side in a debunk post yesterday, and if you want to see the argument in favor of the Pixel 3 XL being "real," I'd suggest starting with all the links at the top of this article. We literally have dozens - possibly hundreds - of photos of the Pixel 3 XL, in both colors, including the retail packaging. We also have a total lack of evidence that any "third" phone exists, while we have distinct evidence pointing to two. If this is not sufficiently convincing to you, I sincerely doubt anything will be until October 9th.

For those of us living in reality, this is all rather strange. But I would argue it is all highly symptomatic of the world we live in today. A world where distrust of Big Media is a popular theme, and insurgent voices have appeal not because they offer us a more believable interpretation of reality, but one we find more palatable. I won't edge into topics that are inappropriate for this venue, but I do want to be clear this is an edge that cuts both ways, and that there is nothing political about phone rumors: merely that the same forces are at work here that manifest in other spheres of our society and culture.

And those hucksters and hustlers on YouTube, once their "it's just Speculation" theories are dismantled, will of course say it was all in good fun. They're just phones, right? And yes, they are just phones. It's fun to speculate! But in a time when the quality and reliability of the information we get on social media and the web is something we should be giving the utmost scrutiny and seriousness, maybe it's not just a phone. And maybe we should think twice about what we're doing to keep the conversation honest - even when it's something that really doesn't matter all that much in the end. At the very least, it's good practice.