Biometric authentication is nothing new for laptops. However, no Chromebook, even Google's flagship Pixelbook, has ever had a fingerprint sensor or facial recognition. Sure, you could use your phone's fingerprint sensor via Smart Lock, but that's just not the same. A commit for face unlock was discovered on Chromium Gerrit just a few days ago, and now, one for fingerprint sensors has been spotted as well.

Speculation for fingerprint sensor-equipped Chromebooks has been around for some time, and there were even rumors that the Pixelbook would have one. Nothing has come to fruition to date, though that might be changing soon. The commit contained terms like OOBE, an abbreviation for 'out-of-box experience,' meaning that this functionality will be baked into Chrome OS.

Text such as 'Set up your fingerprint,' 'Place your finger,' and 'Touch the sensor with your finger. It's on the top left of your Chromebook,' and 'Move your index finger slightly to add the different parts of your fingerprint' was found as well. It looks like three fingerprints are supported at present, though that could easily change.

As for when we can expect a Chromebook with a fingerprint sensor to launch, the next-generation Pixelbooks seem like a good bet. We wouldn't be surprised to see facial recognition make its debut there, too. 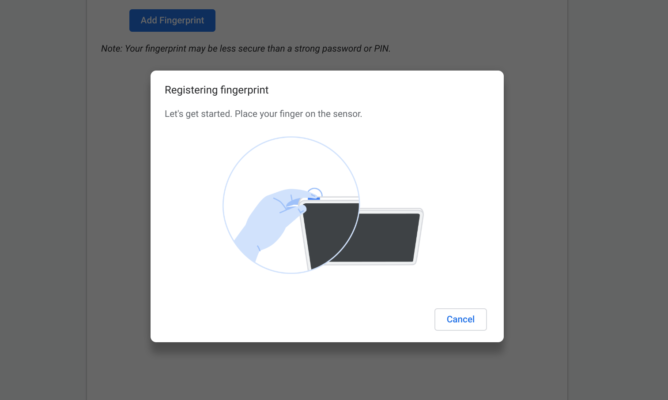 We now know that Google's October hardware event will be on the 9th, so that's hopefully when we'll see one or two new Chrome OS devices. We're already expecting (at least one of) them to include a fingerprint scanner, and a new settings render suggests that it could be located on the side. While sorting through what's new in the Chrome OS 70 developer channel update, Chrome Unboxed found a new addition to the fingerprint setup process, which you can see below.

Now, this is just a render, of course, and as such is not necessarily indicative of any actual product. That said, it's interesting that the sensor would be so clearly shown on the side of the device, and could well allude to its position on the upcoming Pixelbook hardware. According to Chrome Unboxed, there's evidence to suggest that this tutorial section will be tailored to each device and that the first they expect to get fingerprint authentication is a Google-made detachable (codenamed 'Nocturne').

If the render is a close approximation, we could be getting a sleek Chrome OS tablet with very small bezels. Since it's going to be a detachable, it would make sense to have the various buttons and the fingerprint scanner on the part of the device with the screen. We'll just have to wait and see — there's a little over a month until we'll likely find out for sure.