Google isn't the only American tech giant improving on its Indian language support — Amazon has now launched a Hindi version of its Indian app and mobile website. It will be the first among India's other major e-commerce platforms to offer an Indian language version.

Amazon battles primarily against Flipkart (recently acquired by Walmart), Snapdeal, and Paytm Mall, all of which are available only in English — though Snapdeal briefly attempted to launch its mobile site in Hindi and Telugu in 2015, before shelving the plan due to disinterest. As of today, Amazon is offering a Hindi version of its Android app and mobile website, with an iOS version soon to come. Other languages, like Bengali, Tamil and Telugu, are also likely to arrive in the future, if Hindi support is successful.

To browse Amazon India in Hindi, go to the mobile site or Android app, click the menu button and find the section that says "English" with a globe icon, underneath "Your Account." Clicking through, there's now an option for Hindi in beta. The small print notes that the English version of Amazon.in, including the conditions of use, is still the "definitive version." 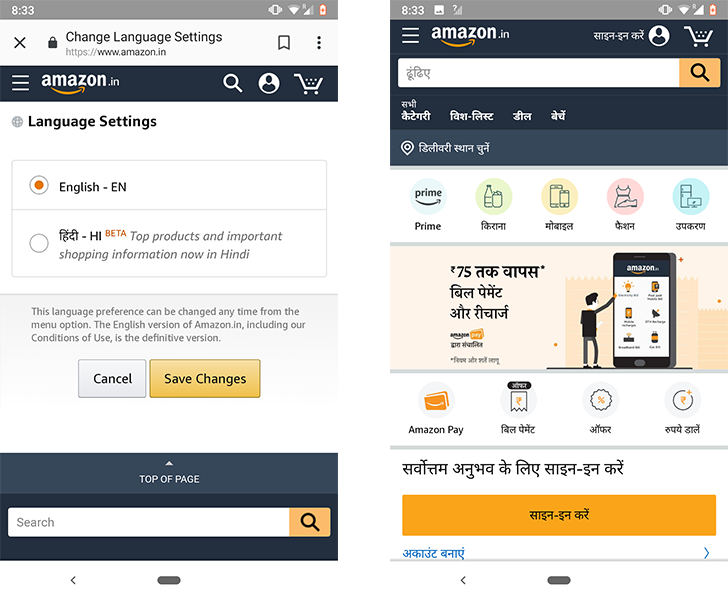 The announcement makes a lot of sense for Amazon. A 2017 KPMG study predicts that Indian language internet users are expected to account for almost 75 percent of India's internet user base by 2021, while a recent report by Nasscom and PwC expects India's e-commerce market to grow 4x to $150 billion by 2022.

In time for the festive season, the move could help Amazon make ground on Flipkart, India's largest online retailer. On the consumer side of things, the move will hopefully push Flipkart and other competitors to begin adding Indian language support to their platforms, as well.

Acer Chromebook 514 hands-on: Possibly the flimsiest Chromebook you can get for $350

Google Photos photo books are now available in Italy, the Netherlands, and Spain