The product renders Asus released earlier this year didn't make the ROG Phone look very attractive. Everything for "gamers" seems to be encrusted with beveled edges and sharp corners. The ROG Phone has some of that, but many of the lines on the back panel are just that—lines. I thought there would be more faceted sections of the chassis, but the overall device is rounded. It's glass, so it's actually smooth to the point of being slippery, and it's a pretty hefty phone. Smack in the middle of the back panel is a ROG logo with support for Asus Aura. That's a fancy way to say that it has RGB LEDs. You can set the logo to a certain color or let it shift through the rainbow. It's tacky but also kind of fun. 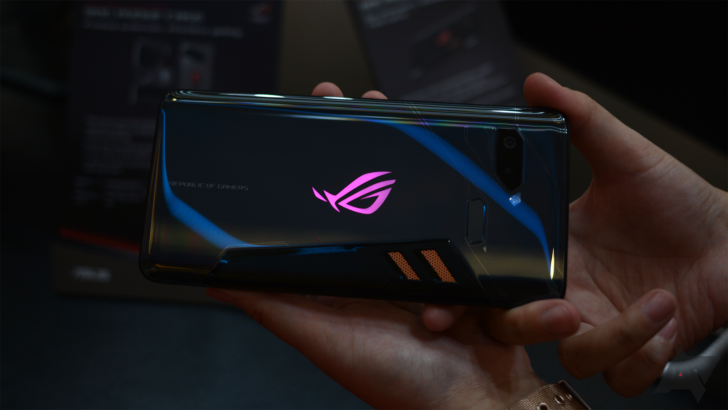 Off to one side of the back, there's a depressed section that's plastic with some metal vents. This gives the phone a rather interesting profile in real life. I'm not fond of the bizarrely shaped camera module and fingerprint sensor, though. The location of the sensor slightly off center is weird and not comfortable.

On the left side of the device, there's an odd little port. Looking closely, it's a pair of USB Type-C ports crammed together (that makes a total of three with the bottom port). That's where Asus' accessories dock with the phone. There's an active cooling bracket that ramps up in response to your device's internal temperature. The Asus control app gives you a lot of nerdy stats about the phone when you've got the cooler attached. I doubt this is going to make much of a difference in performance, but I do like that Asus included a Type-C and 3.5mm audio jack on the cooler. They link to the Type-C ports on the side, so the cables will hang straight down when you hold the device in landscape to play a game. Asus points out that plugging cables into the bottom of the phone means they're in your way when holding it in landscape (like when you're playing a game). 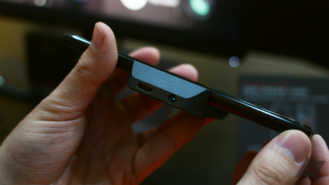 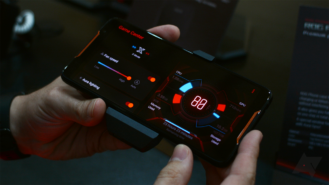 Asus does have a few other gaming-oriented accessories like the dual-display clamshell and physical controllers that clip on the top and bottom, but the ROG Phone gets its real gaming cred from the built-in shoulder buttons. They're not physical buttons, though. The ROG Phone has a pair of ultrasonic buttons on the side of the device opposite the USB ports (that's the "top" when held in landscape orientation). The buttons themselves are a bit less sensitive than a touchscreen would be, so you need to make firm contact more like you would with a physical button. The hitboxes are a bit small, as well. Once you get oriented, it's just a quick up and down motion with your finger to trigger the button. I was surprised at how well these worked, and they're compatible with almost any game. 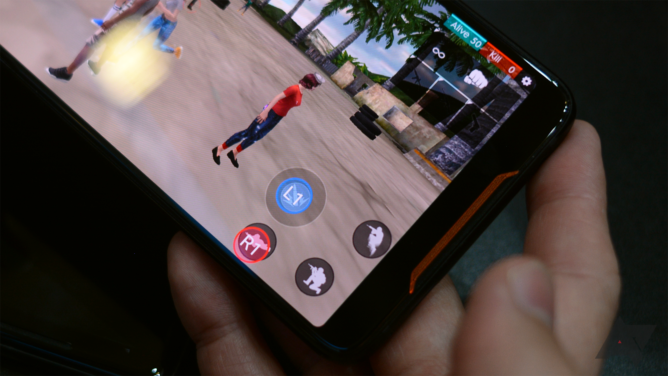 Developers don't need to do anything to support these buttons because they work with screen mapping—similar to Nvidia's Shield controller. You just drag icons for the left and right button to the touch buttons you want to trigger (see above) and start playing. In a mobile shooter, having your fire control on a shoulder button lets you move and aim simultaneously while attacking. It's like using a real controller, which gives you a big (possibly unfair) advantage in online titles. Fair or not, this device will play games like PUBG and Fortnite better than other "gaming phones." 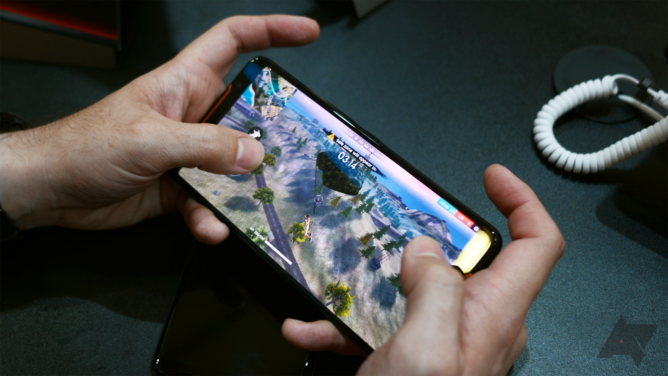 I don't know that I'd use the ROG Phone personally, but there are a lot of people playing mobile shooters these days. They'd probably appreciate those ultrasonic buttons and the smart port placement. Asus doesn't have firm launch plans yet, but the ROG Phone should begin shipping in some countries within a month. North America could see the device by the end of 2018, but again, no promises.