Android Messages has been teasing us lately with a new Material UI overhaul and a dark mode: it rolled out, was removed, then rolled back again with the latest update to the app. Now the web interface is following suit by donning its own sexy look with an even sexier updated dark theme to boot.

When I opened Android Messages on the web this morning, it still had the original interface that came in June, but after updating the Android app to v3.5.053 and getting the new Material look on my phone, I re-opened the web version and saw it there too. We've verified that this new UI is available for a few users, though it may still be rolling out server-side or it might require you close, refresh, or reopen the app on your phone or computer to trigger it. 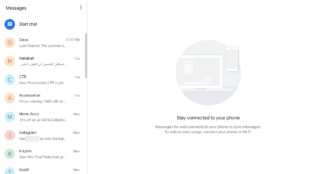 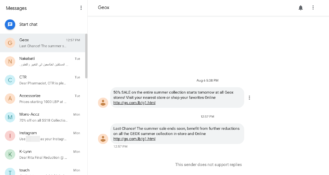 By default, the interface is very white, similar to the Android app now, with grey Product Sans font all over. Call me old fashioned, but I prefer black text for reading. Luckily though, there's also a dark mode you can enable in the overflow menu on the left. It transforms the entire screen into darker greys and blacks.

Some may have already caught a glimpse of this updated Material interface for the web client, but reports are sparse. It's possible that it was tied to previously enabling it in the Android app, or this could simply be the progression of a server-side rollout which began earlier. Either way, it's here now, and you can turn it on for yourself.

Because there was some confusion and we weren't quite specific enough, we'd like to note that the existence of a dark theme in general for the web version of Android Messages is not new. Both the light and dark UIs have been updated, but each existed in different styles previously. Now they both match the interface present on the redesigned Android Messages UI for Android. The article contents and title have been updated to be more specific about this distinction.

The new UI was also noticed by at least a few people before today, so we've added a bit of discussion on the possibility of this being a rollout as well.

Acer announces the 14" Chromebook 514 with aluminum chassis for $350

Dell introduces the $599 Inspiron 14 2-in-1, its first premium Chromebook