If English isn't your native language, you're likely to come across a lot of new words online. As is often the case these days, the first thing you turn to is Google. A simple search for the word gives you a definition card with its different meanings, synonyms, antonyms, and some examples of sentences containing it. But if you live in India, you may start seeing a change in the way definitions are displayed.

For Indian users, Google is starting to show a little banner when they search for an English word's definition. Instead of explaining the meaning in English, it does so in Hindi, a language they're more likely to understand and whose nuances they get. In that case, the definition is in Hindi but the example sentence in English. It's like a mixed bag of translation and definition that might put non-native speakers at ease by using their mother tongue. A drop-down at the top of the dictionary card lets you switch between the new English + Hindi mode and the English-only mode. 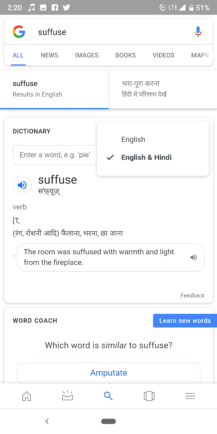 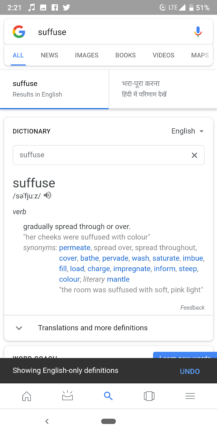 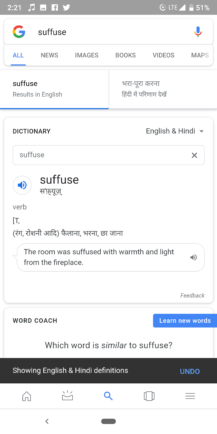 Since we're not located in India, we can't test this feature, but our tipster tells us it doesn't work the other way around; if he searches for a word in Hindi, he doesn't even get the dictionary card. Also, we have only received one tip about it, so we don't know if this is rolling out to everyone now or if it's a limited server-side test.