When Google News was launched in May, it came as an update to the existing Play Newsstand app. At the same time, the separate Google News & Weather app was unpublished from the Play Store, probably to avoid confusion if users searched for "Google News" and landed on the older app instead.

Now, for those users who have still been hanging onto News & Weather, preferring its non-algorithmic and more to-the-point approach, the app has started to show a banner on top saying it's being replaced by Google News. Tapping the banner either takes you to download News from the Play Store or opens it if it's already installed on your device. Predictably, users aren't very happy about the change. Some are already leaving bad reviews for News & Weather, saying they don't want to switch to the new app and prefer the way their articles and news are organized in the existing app. 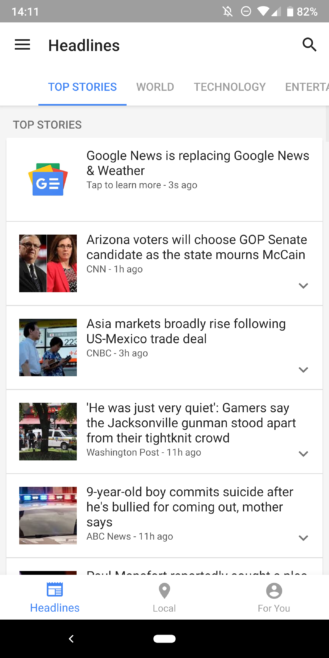 For now, News & Weather is still updating its content and getting recent articles for you to read, but who knows when that'll stop happening. It could be soon or it could take a while, but either way, if you are using the app, you should start looking for a replacement. Whether it's Google News or something else is up to you, you just need to be prepared.

How to fully disable 'Ok Google' listening on your Android phone