It wasn't without its faults, and the terrible battery life did leave me with a dead phone in public more than a few times (and no backup, as previously mentioned). But compared to the low-end devices I've been using and reviewing in recent days, it was a snappy experience.

So why'd I end up using a Nexus 5 for a week? There are plenty of reasons for me to think of the phone, even in 2018. Looking back, Google's Nexus line had a sort of tick-tock structure, with some devices like the Nexus 5 and Galaxy Nexus representing more major changes in software or hardware. I've also got a soft spot for it, as the Nexus 5 was one of my favorite devices of the line. Most importantly, though, I used it because it ended up as an option my recent Twitter poll, and it turns out that all my followers actually just hate me.

In the interests of having fun, I'm going to let everyone else decide what phone I'm going to use for the next week. (Excluding the Pixel 2 XL, as I've been using it for the last week, and the Alcatel 1X, since I don't wanna.)https://t.co/wgBmRqSWq2

I was also very curious about how older phones stacked up in 2018 compared to modern budget devices, like my recently reviewed Alcatel 1X. With a used Nexus 5 going for ~$70 at places like eBay or Swappa, I wanted to see how older but higher-end hardware compared to new low-end devices. Also, Cameron Summerson, formerly of Android Police, did the same thing and thought it was a terrible experience. As AP's resident masochist I was immediately interested.

After a short wait for a SIM adapter, I was off and using my Nexus 5, which was updated to the last stable release of Marshmallow the phone saw. Barring a few specific complaints, it wasn't anywhere near as bad an experience as I expected.

Using five-year-old tech in 2018 was bound to result in at least a few issues, but by far the biggest was battery life. Turns out, my Nexus 5's battery was half-dead. 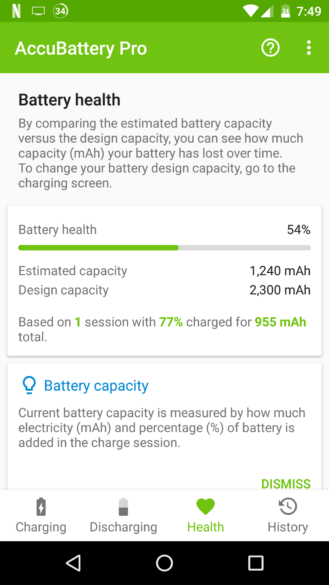 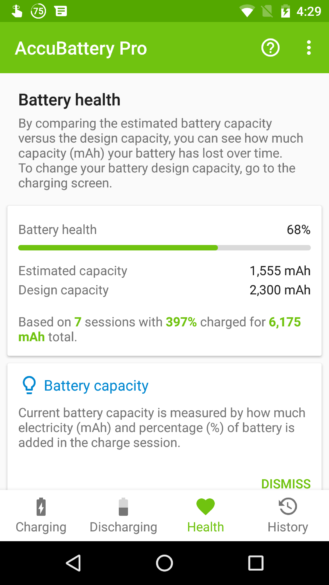 Before (left) and after (right) replacing the battery. Not the best improvement.

I assumed I'd be able to replace it, and the process wasn't difficult, but I'd urge interested parties not to repeat my mistakes. In seeking a quick turnaround, I ordered a third-party battery with faster delivery via Amazon, and the brand I selected made a terrible quality product. In part I'm sure at least some of that is just due to the age of the stock, resulting in limited capacity even on the replacement, but other sketchy details like a temperature sensor permanently fixed at 84 degrees are especially concerning. 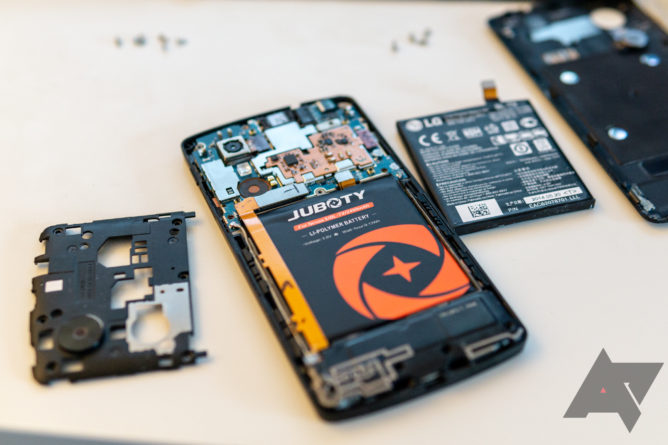 Do not buy that battery.

The very best I was able to achieve in the week I used the phone was a mere 1.5hrs SoT, and I got pretty used to having it die while I was out and about.

Standby battery life was stupendously bad on Marshmallow. With Accubatttery running to check use, I’d often pull it out of my pocket to see it reporting nearly a full amp of drain doing nothing. I couldn't let the phone sit unattended for more than ~6 hours before it died completely. This is all after a fresh wipe, as well. Either something’s been broken in software since Google stopped updating it, or some of my 2018-era apps are having quite a party in the background. (Or battery life on the Nexus 5 was just that bad, and I forgot.)

Leaving aside battery woes, cellular data connectivity was also an occasional issue. Modern phones can do the handoff between Wi-Fi and LTE just fine, but the Nexus 5 had a few problems. Typically when leaving home, I’d have to keep in mind losing data for 30 seconds to a minute, which was a noticeable impediment starting Spotify on my way out the door. I’d also get bumped down to 3G/HSPA at random times while out and about, and the drop in speed reminded me that used to be A Thing back in the day. While it wasn’t a deal breaker, it was certainly annoying — though HSPA does seem a lot faster now that it isn’t so congested here in the US. Whatever the cause, I’m glad I haven’t seen that indicator for slower data on any flagships in years.

In what is likely a related problem, SMS 2FA delays were intense, often reaching 15 minutes (or more) before I'd get them. Of course, as educated consumers, we all know SMS 2FA is a joke, but plenty of big companies are unfortunately still too ignorant of security in 2018 to understand that. 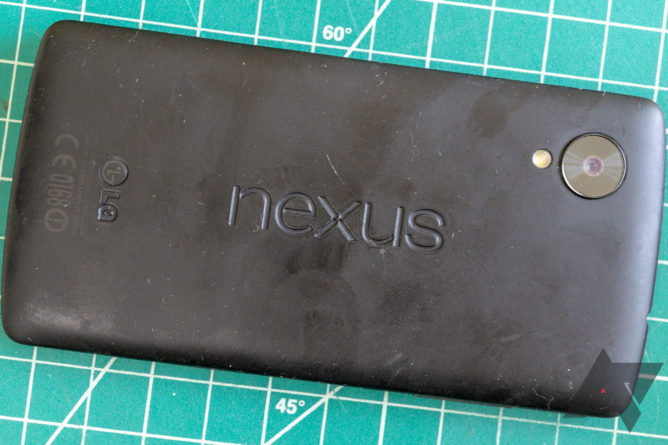 My biggest complaint, though, was the materials Google chose for the Nexus 5. Soft touch rubber is every bit as disgusting to feel and photograph now in 2018 as it was in 2013. And worse, the intervening years have shown how delicate the greasy finish is and how poorly it hides abuse. It's a foul material, and I cry tears of joy that it has fallen out of use.

But mostly, things were fine

Although the Nexus 5 wasn't without its problems, things were surprisingly fine — but just fine.

Comparing it to the last lower-end handset I used full-time (the Alcatel 1X), performance on the Nexus 5 was miles better — and it can be purchased used for $30 less. Power efficiency and battery capacity may have improved drastically in the last five years, and performance may have increased, but with an updated ROM and a decent battery, the Nexus 5 could still be perfectly adequate for those with simple requirements. 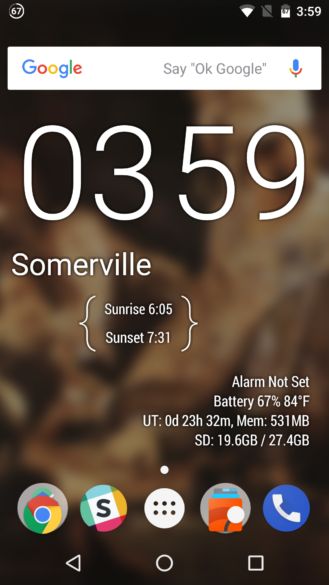 Hard to tell it's Marshmallow without digging a little deeper.

Although I wouldn't recommend any of our readers use an ancient Marshmallow ROM for security reasons, It's surprising how easy it was to adjust to the three-year-old software. Plenty of minor conveniences were introduced in Nougat and Oreo that I missed, like notification bundling, direct replies, background app limits, and the Quick Settings bar. Doze would also have been useful to mitigate poor battery life.

But on the other hand, I had the Blobs back, and you can't put a price on that.

It might be running an older version of Android, but Google has decoupled quite a lot of the experience from the system image and Android version these days. Though plenty of bits were obviously dated, like notification handling and chunks of the UI, app features and the overall experience were surprisingly modern. Android has come a long way since then, but the basic interface is still recognizable to the contemporary eye, and it didn't take me more than a minute or two to get used to the few differences. Even the camera on the Nexus 5 was acceptable — keeping in mind that it represented the output of a $70 device in 2018. It was incredibly grainy and noisy with a habit to over/underexpose if you weren't careful, and it didn't adapt to the color temperature of different types of lighting too well, but with some fiddling, you could get perfectly mediocre results. "Good enough for Facebook," as Cody would say.

I've gotten used to using lower-end phones in recent months, so it's certainly a subjective opinion, but apart from my battery woes, there weren't any times I really felt like I was missing anything using the older phone. All my apps worked fine. Unlike Cameron's experience, I found Android Auto to be tolerable. In contrast, I was using it as the standalone app with wired audio since I don't have an Android Auto head unit, and apart from a bit of lag launching the app and trying to search for a destination, it actually worked fine while navigating.

It could have been Stockholm syndrome, but I even started to appreciate the smaller size: it was nice feeling like my phone was always firmly in my grip. The precarious pinky balance using bigger phones like the Pixel 2 XL was, at least temporarily, a thing of the past.

In the end, I easily made it through the entire week with the Nexus 5, and in comparison to the low-end hardware I habitually inflict on myself, it felt like a vacation.

Android Flagships have come a long way since the Nexus 5, though it didn't even really qualify as one at its own peak. Whatever you want to classify it as, even in 2018 the phone is surprisingly usable. Of course, it's not fast at all compared to a recent high-end phone like the Pixel 2 or OnePlus 6. But as a $70 phone, the immediate comparison is the current budget lineup, and there its performance easily destroys the cheap MediaTek selection. With improved battery life and a more recent and secure ROM, I'd probably be telling anyone looking to spend under $100 on a phone to look at a used Nexus 5.

Report: Pixel 3 to be revealed at Google event in NYC on October 9th