When Asus announced the Zenfone 5 lineup at MWC, all eyes were fixed on the the king of the group, the 5Z. Fast forward almost six months and the phone is finally available to purchase at a mere $500 in the U.S. While the high-end Android flagship market is squarely controlled by Samsung, there's a curious middle ground between budget and top-tier devices. This "affordable flagship" space is heavily populated with offerings from OnePlus, Honor, and Xiaomi, but Asus has set its sights on a piece of that pie with the 5Z.

Quite frankly, this is the Taiwanese company's best phone to date, sporting premium hardware, a solid camera, and a very iPhone X-inspired design (for better or for worse). It's fast, powerful, and a looker to boot. However, I'm sure you're waiting for the "but" and I don't want to disappoint: the Zenfone 5Z, as awesome as it is, just doesn't quite cut it. When compared to the OnePlus 6, arguably one of the best Android phones released this year (especially in terms of value), Asus' offering falls a bit short. Even though it's $30 cheaper, it has other quirks – notably its software – that bring it down. 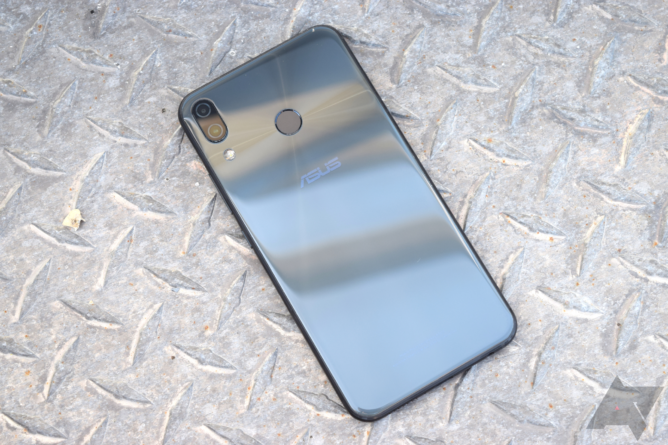 Asus did a nice job with the Zenfone 5Z, even though the design is quite unoriginal. Fine, I'll just come out and say it: it looks as close to an iPhone X as Asus could manage. Now that we got that out of the way, let's move on.

In what seems to have become a staple for the company, the Asus Zenfone 5Z has this gorgeous reflective back underneath the glass. When it catches the sun just right, it's quite stunning. Unfortunately, its beauty is easily masked with fingerprints since it picks them up quite easily.

The metal frame feels solid, though the phone itself lacks any sort of curvature like you would find on the OnePlus 6. And both the power button and volume rocker are nice, especially if you like the quieter, softer click. 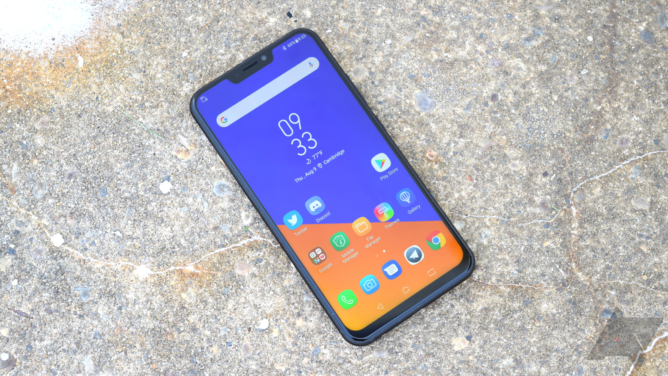 Asus went with a 2246 x 1080 Super IPS+ LCD panel, which holds up pretty well against other devices in this category. It has rich colors, excellent outdoor brightness, and good viewing angles; you know, the typical fare with higher-end LCDs. Obviously, the blacks aren't as deep as an OLED display. There is light bleed visible around some of the edges in dark rooms — on my unit, it was particularly noticeable up near the notch.

Ah yes, the Zenfone 5Z has a display cutout, aka a notch. It's not bad, per se, nor is the bottom bezel (the "chin"), and to the casual glance, they're both roughly equivalent to the OnePlus 6's. The notch itself is wider on the 5Z, though, so take that as you will. It can be "hidden" via an option in the settings, but it looks worse in my opinion. 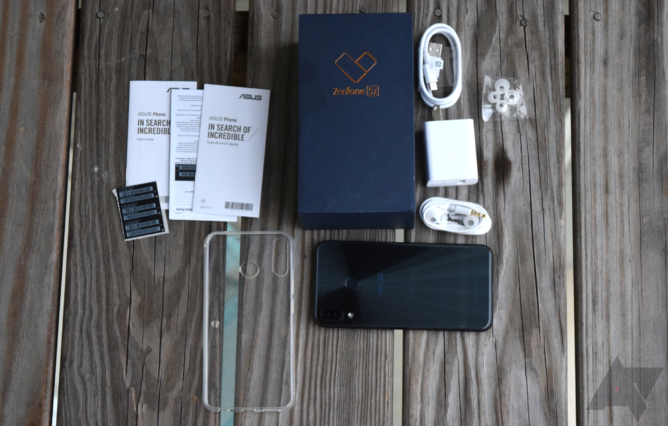 In the box, Asus includes a pair of 3.5mm earbuds (with additional tip sizes), all the usual manuals, a USB-C to USB-A cable, the charging brick, and a clear TPU case to keep the back from getting scratched or fingerprinty.

Asus has spent most of the last few years stepping up its camera game. While a lot of the talk has been just that, talk, recent devices have shown noticeable improvement. The Zenfone 5Z is a culmination of that. Daylight photos are very sharp, right on par with the OnePlus 6. 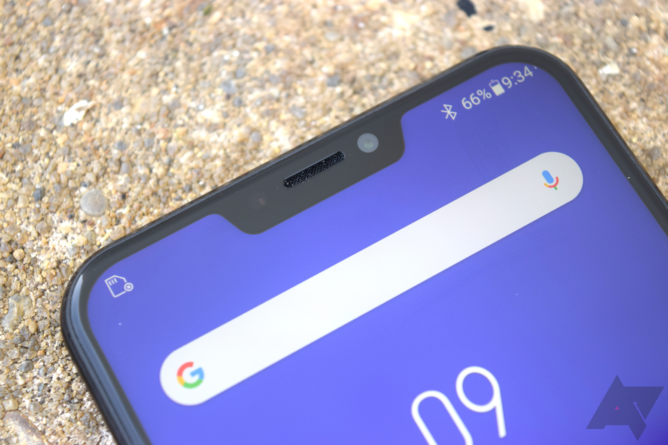 That's all fine and dandy, but the Zenfone 5Z really struggles in low-light environments, like many phones do. While it brings in more than enough light, it tends to overexpose nighttime or indoor shots, leading to more noticeable noise than what the OnePlus 6 puts out. It regularly struggles with keeping proper focus – a sentiment I've also heard from other reviewers – and so low-light photos often come out blurry and just unpleasant.

Asus took after LG a bit by placing the secondary camera sensor behind a wide-angle lens. Depending on the day, I either prefer that method or a dedicated telephoto one. It does a nice job at capturing large scenes, such as the massive WWII ship on the opposite shore. Since the biggest problem with the Zenfone 5Z is its software, I decided it would be good if we talked about it for a bit. At time of writing, this phone ships with Android 8.0 Oreo under Asus' ZenUI 5.0 skin (with the latest version provided via OTA). Everything is customized, from the notification shade to the settings menu; even some animations are changed. Funnily enough, it all looks a bit like Samsung's skin, doesn't it?

The UI is vibrant and feels cheery, with bright icons, showy transitions, and an overall upbeat vibe. One thing about stock Android, and things based on it like OxygenOS, is that it's quite spartan in appearance and functionality. OEMs like OnePlus and Motorola add their own tweaks, but the experience is almost universal. Take what you know there and throw it out the window — ZenUI is totally different.

Under the hood, the Zenfone 5Z is packing some impressively powerful hardware, but ZenUI still feels a bit sluggish, or perhaps heavy, though far less so than previous Zen devices. I noticed that some apps would take a teensy bit longer to launch than usual, especially when compared side-by-side with my OnePlus 6. Asus proudly talks about the AI that's spread throughout this phone, so my theory was that the software guessed incorrectly which apps to load up first, thinking those were what I'd want.

However, over the course of my time with this device, I found two glaring problems. First up, stability. ZenUI crashed repeatedly after about a week of testing. I'd be in the middle of reading, typing a message, or a phone call and the phone would randomly reboot. It wasn't an every day occurrence – though, one day had three reboots in the span of seven to eight hours – but definitely frequent enough to cause frustration. On top of this, I had random app crashes. Several factory resets didn't fix the problem. Things like Google, Pulse, Telegram, Slack, and the phone app would just crash with repeated error dialogs loops, preventing me from using the device and therefore forcing me to restart it.

My other problem lies with how Asus handles lockscreen security in ZenUI, so this isn't limited to the Zenfone 5Z. Other Android devices will ask you to reauthenticate using your PIN/password if the phone has been sitting idle for some time or following a reboot. When everything is back up, if you try to scan your fingerprint, you'll be asked to type in your lock method. With Asus devices, you aren't told that you need to reauthenticate. So while something like the Pixel 2 XL or OnePlus 6 will open the PIN screen, ZenUI won't do anything.

You can tap on the fingerprint sensor or stare at the lockscreen (for face unlock) all damn day and nothing will happen. It's only when you swipe up that you see that the phone wants you to enter your PIN. This seems minor, but besides the very frequent restarts, my 5Z would ask for reauthentication after sitting on my desk for a few hours. It's just plain bad software design, more annoying than Huawei and notifications disappearing from the lockscreen.

With how far we've come with smartphone technology and mobile operating systems, I find that I have no patience for unstable, final release software, especially considering my review unit is the retail version (i.e. the same kind you can go buy right now).

Probably not. While it's Asus' best phone ever, it's not quite up to par with the greatest from OnePlus or Xiaomi. It's good, don't get me wrong, but just not good enough. Luckily, most of its problems could be addressed with future software updates. But here in the U.S., you can get a OnePlus 6, which provides a better experience overall, for only $30 more.

In a vacuum, the Zenfone 5Z would be an easy recommendation (almost), but the "affordable flagship" market isn't devoid of competition.

Asus jumped aboard the AI train, throwing it in everywhere from the camera to the OS itself. Most of us just roll our eyes when we see "AI" plastered all over marketing materials, but at least most of Asus' implementations are pretty innocuous. The AI-adjusted charging speed, however, is just gimmicky and I found that the system could never properly predict which apps I wanted to use, even though I have five that I use every time I unlock my devices.

Software continues to be Asus' biggest problem. ZenUI, despite improving steadily, is still full of unnecessary additions and odd quirks. It's more resource-intensive than OxygenOS, so the 5Z feels less responsive than the OnePlus 6.

The Zenfone 5Z ships with Android 8.0 Oreo and it'll be god-only-knows how long until it gets 8.1 or even Pie. Asus is not synonymous with fast updates, so in light of this, I have a very hard time endorsing the company's mobile products. 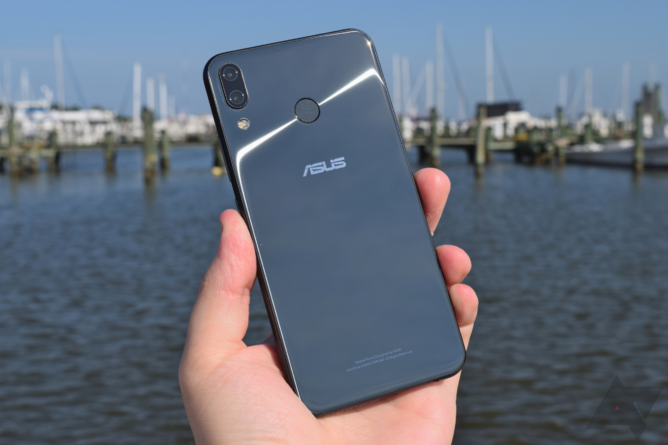 Added bonus: The Midnight Blue version blends in with water

In a vacuum, the Zenfone 5Z would be an easy recommendation (almost). In a way, it reminds me of the ZTE Axon 7 from way back when: it's great at many things, and downright annoying in others. But just like the Axon 7/OnePlus 3 days, the "affordable flagship" market isn't devoid of competition — this makes the 5Z's flaws that much more apparent.

At this point in time, here in the U.S., your best option for a $500-ish phone is the OnePlus 6, no question. It has a more cohesive software experience and OnePlus has thus far proven to be better about updates than most, especially Asus.