Earlier today, Google revealed a redesign for its aptly-named "Fit" fitness tracking app. In addition to a more "updated" 2018-era Material Design aesthetic, this new version gamifies the act of exercising, rewarding more strenuous activities with so-called "Heart Points." Other user-facing changes like the ability to manually enter your blood pressure have also been added. Let's dive in and take a look at the changes.

This is a major update, and as such, Google has given it a major revision number, bumping things up to v.2 (technically, v2.01.18) from v1.82. To start, the icon has been replaced with the new four-color heart you see above, which matches the style and color of many other recent Google apps. The setup process for Fit was always a bit on the longer side, with three screens to get past before you're dumped at the home screen, but the new version packs in seven screens which describe the operation of the app, request information, and grant permissions in great detail. Note, it will do this step even if you have already configured the previous version of Fit, all the information will just be pre-filled. 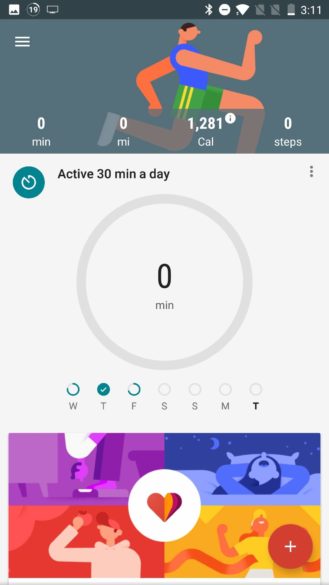 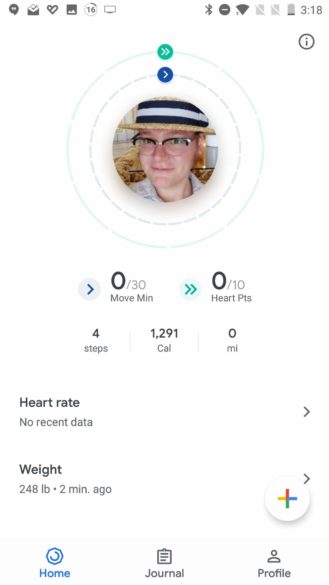 Interface changes are significant. Everything is bright and white, with the old sort of ugly bitmaps being finally removed. The slide-out "hamburger menu" sidebar is entirely gone. Now all navigation takes place via the tabbed bar on the bottom. There are three sections: Home, Journal, and Profile. The home shows most of the same sort of information, but with a new layout.

Previously Fit would show you your activity history in a sort of mixed view, with a big circular indicator up top for time spent active, and as you scrolled down, you could also see widgets for your weight history and recent activities like walks from your timeline, complete with maps. Now, most of that visual history gone (so far as I can tell). The new "Home" page still shows that circular overview of your activity, but now it has two for both your "Move Minutes" and "Heart Points." 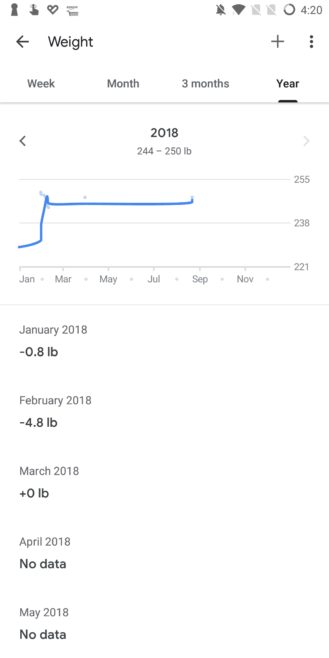 The weight graph widget is gone from that overview, now simply showing your most recently entered weight, with the graph now accessed by tapping that value, bringing you to its own new page. The new graph uses some type of averaging rather than following the points precisely, as it did before (or it's just bugging out for me).

The "Recent walks" maps widget is entirely gone from the home view as well. I sort of liked it, but the information really wasn't that useful from a health-focused perspective. It was pretty in a geeky way, but it didn't really provide anything useful, so it's understandable that it would be taken away. 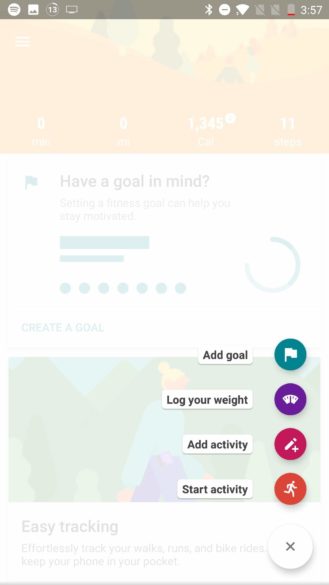 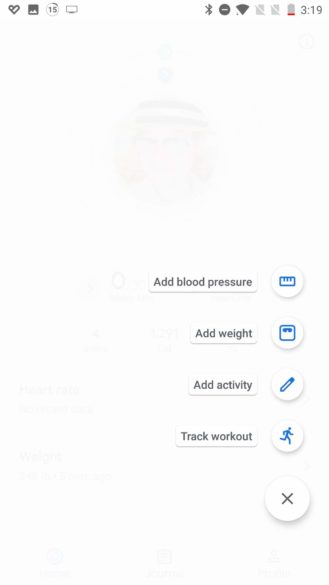 The FAB for adding new activities is still there, but it's got a stylish new look and a new feature. It's not terribly exciting, but you can now manually add blood pressure measurements to your Fit data, in case that's something you'd like to separately measure and keep track of. Fit has long been able to monitor heart rate, and I'm not sure if blood pressure data could be pulled from wearables as well, but either way, now you can add it yourself. 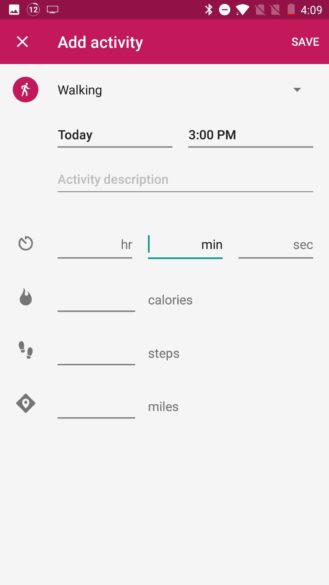 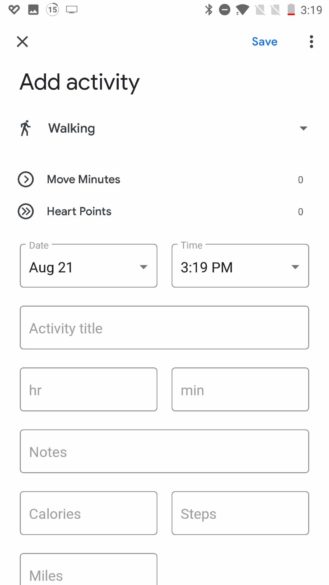 "Add activity" screens in the old Fit (left) and the new redesign (right).

The "add activity" screen accessible via the FAB looks new, but not much has actually changed. All of the same options are present, but now it shows you the number of Move Minutes and Heart Points you earn from a given exercise as you enter that information. There's also a new "Notes" section for adding additional information about a given activity, which could be useful. 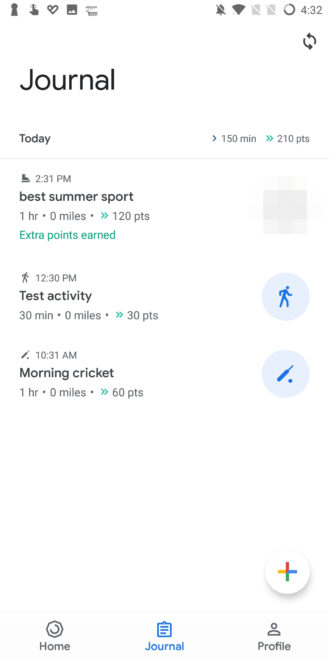 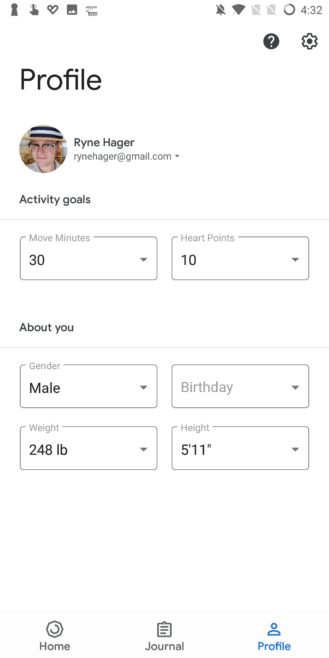 The new Journal tab seems to be a more effective replacement of the old timeline widget, keeping track of your activities over time. It may take some time for walks or other older data to populate inside the Journal. Although none of mine showed up originally, my walk history is now present in the Journal tab, together with other manually added activities.

The profile tab is where your personal information like weight, height, gender, birth date, and goals can be entered. It's also how you access the app's settings, which have been relocated to the cog icon in the top right corner here. 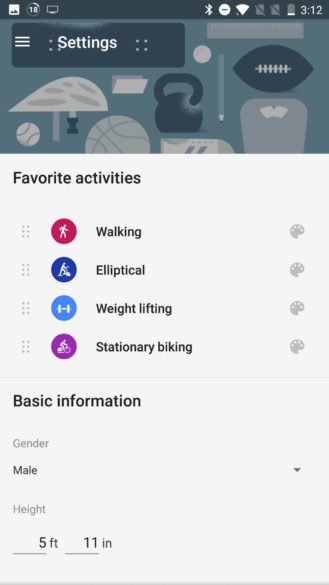 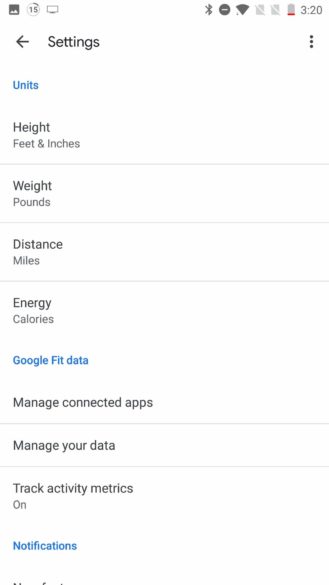 Settings in the old Fit (left) and the new Fit (right)

At first glance, the new app doesn't seem to have anywhere near so many configurable settings, but that's just because they're now better organized. So far as I can tell, all the same options are there, they've just been nested into new sub-menus. The only thing that is genuinely missing I can see is the ability to change accounts — but I always found Fit's tendency to want to access my work account as well as my personal account an annoyance anyway. The omission is a welcome one. 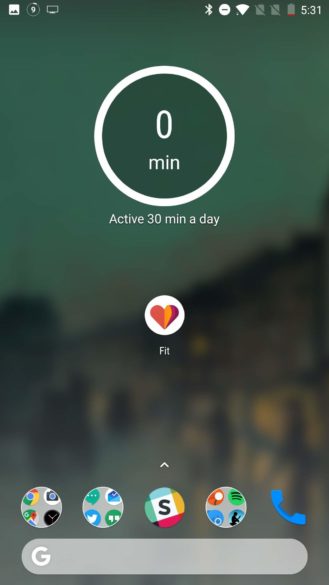 Unfortunately for anyone that was a fan of Google Fit's homescreen/launcher widget, that appears to have been removed with this update. 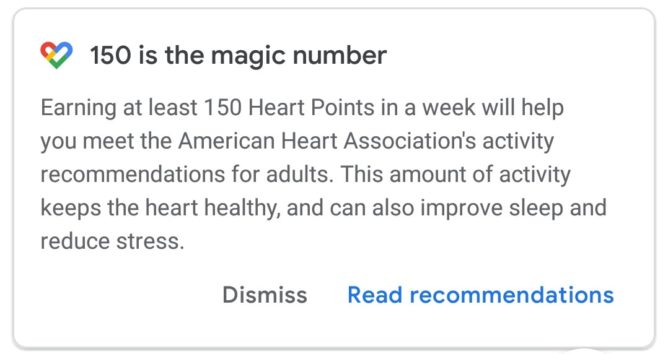 The new gamification is part of a collaboration with the American Heart Association (Update: in other countries it states working with the World Heath Organization), meant to encourage you to exercise in more than one way. Previously, Fit really just kept track of the duration of activity, but not the intensity. While that's a good start, the new Heart Points are for more brisk activities that increase your heart rate a bit more than the average walk. Not all forms or types of exercise are equal, and a bit of time spent participating in more strenuous activities which raise your heart rate is good for your heart's health. The AHA recommends we all earn at least 150 heart points in a given week.

During the setup process, Fit states that it's able to adjust to your goals over time, so expect us to either update this coverage as we get more information about how that works or new and separate coverage as we judge the new Fit over time. Who knows, I might get off my lazy butt and back into the gym. 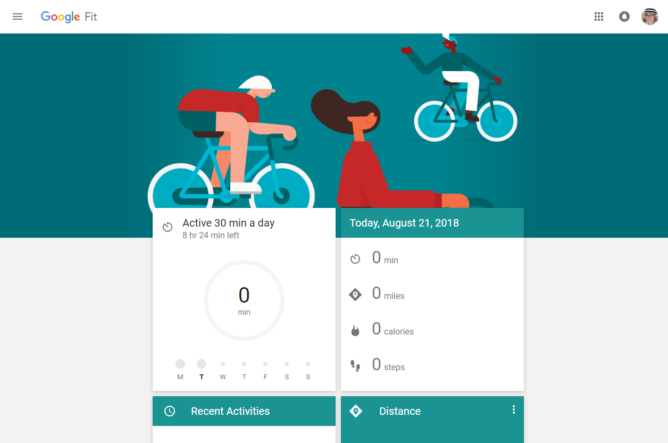 Interestingly, the Google Fit website remains almost entirely unchanged. We aren't sure if a redesign is set to hit it as well, but the two now have quite a different aesthetic.

This v2.0 update is likely in a progressive rollout since we've seen the APK in the wild, but if you'd like to get your hands on it early, we've got it for you over at APK Mirror. If you're a bit more patient, Google says it should be rolling out beginning this week over at the Play Store.

The homescreen widget was also removed in this update, as spotted by one of our readers (I didn't think to check). The post has been updated with that information.

Although walks weren't showing up for me in the Journal tab before, some time in the last hour or two they began to appear, so there could merely be a delay when importing older data into Fit. Outside of the US, the app also thanks collaboration with the World Health Organization rather than the AHA. Both of these details have been added.