One of the things that's unique to the Play Store compared to other mobile app stores is the ability to try out an app without having to download and install it. Android Instant Apps have been around for over two years now, with support for Instant Games added back in March, allowing potential users to play around with a game before deciding to download the full version. For developers, this provides a golden opportunity to get their app or game into the hands of users who would likely not have downloaded it otherwise, with the only real drawback being the small additional work involved in getting the Instant app up and running.

In a blog post, Google has announced that it is making developers' lives easier by simplifying the process of setting up an Instant app and dropping the URL requirement for apps and games. Up until now, all Instant apps needed to have their own website with intent filters and link verifications. This could arguably pose an obstacle to some developers — particularly smaller devs — who did not have a dedicated website for their game. Now, both Instant apps and games can be launched using only via a deep link, without any additional URL requirements.

Google also says that it is working on getting Instant working with app ads "in the future," which would give users the opportunity to try out a whole new app in an essentially frictionless experience.

You can try instant apps and games by tapping the "Try Now" button in the Play Store for apps that support it, or by opening the Play Games app and browsing available titles under the 'Instant Gameplay' section of the 'Arcade' tab. 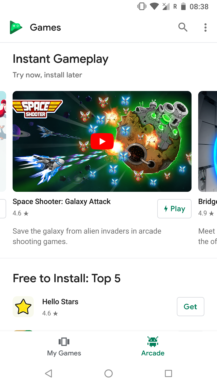