Phone manufacturer Doogee mostly sticks to cheap, uninteresting devices that fly under the radar. It does occasionally pop up with some weird piece of hardware like the sliding Mix 4 or the ruggedized S60. Today, Doogee is getting in on the latest smartphone fad: gaming phones. The S70 keeps the questionable rugged styling from the S60 and adds upgraded specs and a gamepad attachment.

The Doogee S70 positions itself as a gaming phone, but the specs are a step below most other phones in this emerging category. Instead of a Snapdragon chip, the S70 has a MediaTek Helio P23. That's chip has eight A53 cores at 2.5GHz and a Mali G71 GPU. You also get 6GB of RAM, 64GB of storage, and a microSD card slot. Probably the most impressive part of the spec sheet is the 5,500mAh battery with 24W fast charging.

The phone is roughly octagonal with chopped-off corners, and there are a lot of extra angular bits all over the phone. Around back, there's a metal inlay with the dual 12+5MP camera and a fingerprint sensor. There's a gaming mode button on the side, which silences notifications and closes other apps, and you can attach the thumbstick controller to the top of the phone (left side in landscape), but it connects via Bluetooth. 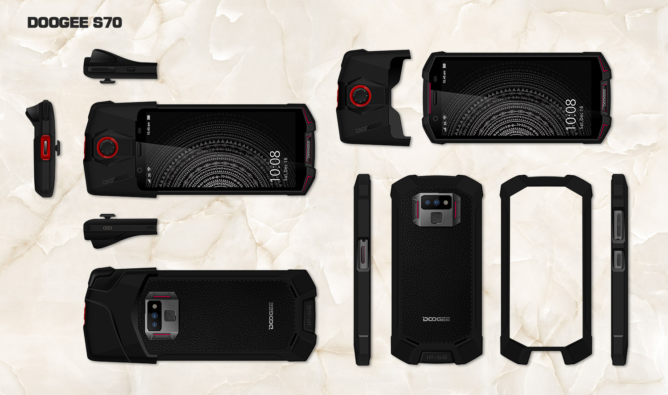 After delivering a great number of outstanding smartphones, DOOGEE now seems to involve another hot industry, the game market. Right, exactly the rapid-growing mobile game market! According to reliable resources, DOOGEE is planning to announce a brand-new IP68 rugged phone, DOOGEE S70, for explorers and gamers. This model is stronger and more powerful than its predecessors not only just because the optimized performance, but also the exclusive gamepad module. It is the first time for DOOGEE to combine the game element with their well-known IP68 rugged phone. Innovation that DOOGEE fans expect finally comes!

S70 is promoted as a game rugged phone. Compared to the former DOOGEE rugged phones, the most different innovation of S70 should be the gamepad design. It is designed in the form of module, and user can connect it to the top of the phone then S70 will turn a game console in a second. Referring to the the gamepad, it is compact and easy to operate for gathering the moving, aiming and firing simultaneously. It can be imaged how exciting it is when the adventurers get together to play games in group on the journey. This creation is a big step forward on the rugged phone road, DOOGEE makes the IP68 chunk more interesting and recreational.

The performance of a phone is paramount for competitive gamers who need to operate ahead of their opponents. Except the IP68 water resistance and dust resistance features, it is said that DOOGEE S70 equips Helio P23 octa-core processor clocking up to 2.5GHz and 6GB big RAM to ensure smooth gaming. A 5500mAh battery, which is huger than Black Shark’s, with 24W flashing charging greatly guarantees the power and recharging speed. In addition, the 18:9 large screen may help the player discover target faster.

DOOGEE S70 is a game phone that a cooling system is more needed, which greatly reduces the heating phenomenon of the mobile phone during the game. Moreover, the shell of the gamepad is also hollow that the whole device will have more space to dissipate heat completely.

DOOGEE S70 is indeed a superb combination of strong rugged smartphone and game console. It should attract a lot of adventure enthusiasts and gamers when officially released to public. DOOGEE S55 is freshly available on the AliExpress and Cdiscount now, while S70 is estimated to be announced in August.