Mobile games are a major contributor to the modern gaming industry, but while many of us play them, only some users actually pay up. That is, of course, because for the most part paying is optional. The dominant pricing model these days is free-to-play games with in-app-purchases (IAP) — for instance, paying real-world dollars in order to play continuously without mandatory cool-off periods, or purchasing extra lives. In a recent report from Liftoff, a mobile app marketing platform, the agency delves into who among us is paying for mobile games, and who is refraining from dipping into their wallets.

The overwhelming consensus? iOS users and women are much more likely to make in-app purchases than Android users and men. Liftoff reports that the 21% IAP conversion rates for iOS users are nearly double that of Android users, which rest at 10.8%. While it acknowledges that its own data, drawn from 350 gaming apps (58% iOS and 42% Android), may overemphasize the disconnect, the findings are backed up by evidence from other sources, as well. 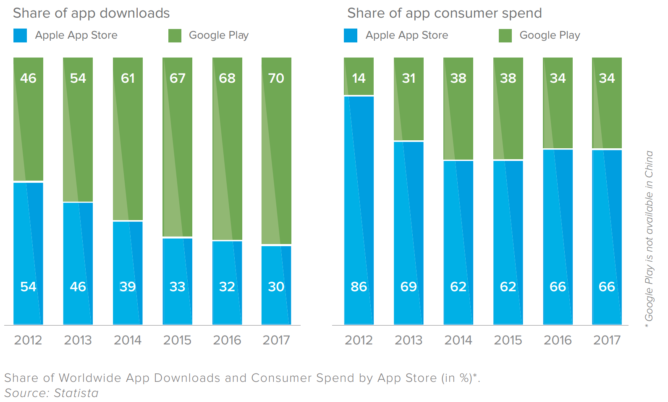 App market data provider App Annie reports that Android users accounted for 70% of total app downloads in 2017, but generated only 34% of total consumer app spend. Still, the sheer size of the Android market — in 2017, Google reported over 2 billion monthly active devices — means mobile game marketers aren't going to give up on the platform any time soon.

That doesn't mean that mobile games are more popular for women than men, though. Liftoff cites games research firm Newzoo's data showing that 52% of men and 48% of women play mobile games more than once a month. 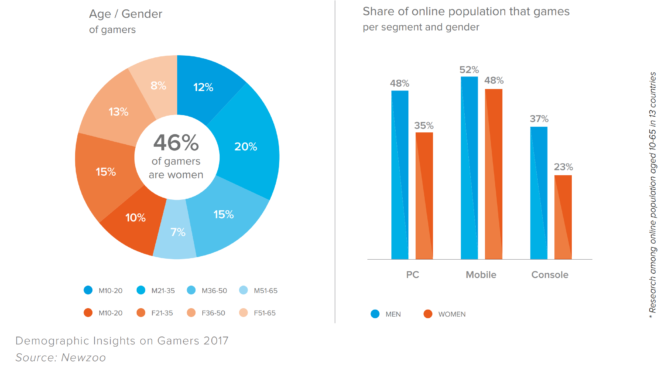 But with women being a demographic more willing to spend on their favorite games, it would seem natural that game developers and marketers would target them with content tailored to them. In reality, that's just not happening. A recent study also by Newzoo shows that of the top 100 grossing games on Google Play, there are 44% more app icons featuring male characters than female characters, and that 60% of women who play mobile games think that 30% or fewer of mobile games are made for them.

Of course, this isn't a new phenomenon. From adventure novels to blockbuster movies, the buying power of women has often been underestimated (frequently, there's the assumption that women will buy novels, films etc. about men while men won't buy those same products if they're focused on women). As Liftoff notes, though, game marketers and producers are leaving money on the table by not offering equal representation. And, hey, it's also just the right thing to do.

Instagram is adding random people's posts to your Feed again