The latest Gboard update landed a couple of days ago with "Minis" sticker packs, a feature developed originally  for the Allo messenger. However, as the story often goes with Gboard, there's still more to be seen with a teardown. There are the first hints about clipboard integration and some kind of hotkey support for Chrome OS. Follow-ups are also here for a previously spotted floating keyboard and the morse code input introduced earlier this year.

I've always found it strange that software keyboards don't usually interact with the clipboard, but there are now signs that Google may be taking a shot at doing something like this. The latest update includes a couple vague hints that some type of integration with the clipboard is in the works. 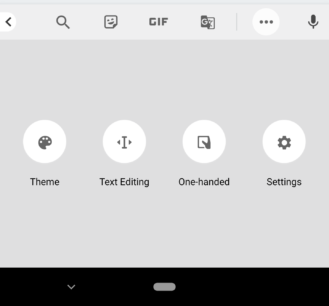 The "access point" in the name refers to the screen where the clipboard button will exist, it shares the same position with other features like the Text Editing tools and One-handed mode, and it can be rearranged to appear in the toolbar at the top. To go with the line of text (and a matching array entry, not included), there is also an icon which will look like this when the feature goes live. 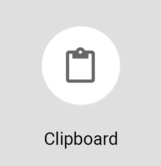 Unfortunately, there's not much to look at in terms of functionality. I can only guess as to what we'll see, but I have a feeling this will be a fairly traditional clipboard manager with a history of recent clips that can be immediately pasted into the current text field.

Google announced that Gboard will be making its way to Chrome OS later this year. In fact, the anticipated timeline has this occurring next month. I can't say whether the original deadline is still intact, but it looks like one of the first new features may be sneaking in with this update.

A small batch of new lines was added that explains users can assign behaviors to a key combination – basically, creating keyboard shortcuts.

There's no text to explain what types of shortcuts or behaviors can be assigned, or whether the key combos allow for multiple modifiers (e.g. CTRL + SHIFT + key). These few lines also don't reveal if these shortcuts are for launching apps, triggering features within apps, or just a way to assign some of the predefined system functions to preferred key combos.

In the last Gboard teardown, we had a brief section about an upcoming floating keyboard mode. Now there's a bit more activity, although it reveals basically nothing new. Here are the new strings:

And slightly more interesting, there are some new images. The first two are a toggle for the access point screen (described above).

The keyboard itself will be drawn with a handle for dragging it around the screen and will project a shadow onto whatever it's covering.

A new morse code input mode received a bit of attention during Google I/O in May, but besides adding a miniaturized version, there haven't been a lot of changes. However, Google is adding support for external switches to directly control the morse keyboard.

This obviously isn't significant to most of us, but for disabled users lacking the dexterity to operate the onscreen keyboard, this will likely be a big enhancement to their lives and ability to communicate.

It's a small detail, but Gboard now has an internal setting for a filter that will eliminate racy GIFs from search – it'll remove anything that might be inappropriate for younger users. I'm not sure if this will become a proper setting in Gboard, but it would be nice to have the same option to control GIF filtering as we have for blocking offensive words.

Already decided on the Galaxy Note 9? Spigen has you covered [Sponsored Post]