Pixel 3 XL details have been leaking from Google like a sieve recently. Just earlier today, our Canadian friends at MobileSyrup were tipped off with a set of photos showing a phone which looks to be the Pixel 3 XL in all its exceptionally notched glory.  This is also the first time we've spotted one in the expected black colorway in use, as the previous engineering sample leaked back in June was unable to boot. 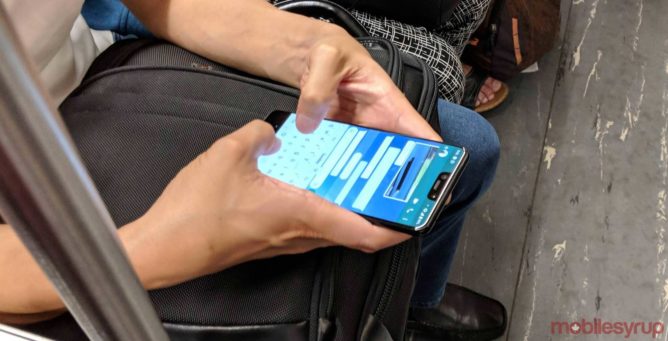 This angle doesn't show off any new details, though the (already often ridiculed) chin does seem especially pronounced in these photos—perhaps due to the navigation bar, which may be visible. The "fivehead" extra-large notch is also present, sporting a pair of cameras, space for sensors, and a speaker grille. 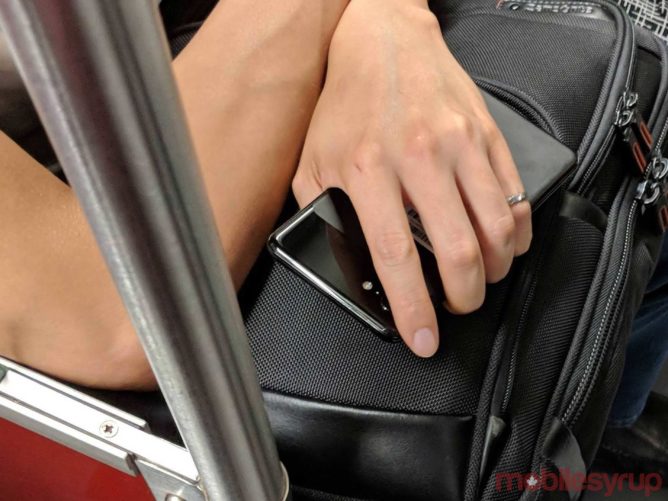 A photo of the back shows off the difference in texture across (what we assume to be) a rear glass panel. The two-texture design has been visible in numerous leaks, but the angle and lighting have never been quite right for anything beyond guessing at the methods or materials. This angle certainly looks like the bottom 4/5ths is acid etched glass, with the top remaining glossy and reminiscent of the glass insert in the OG Pixel and Pixel 2 phones.

As before, it looks to have only a single rear camera.

This may actually be the second time MobileSyrup has spotted this particular device. Someone with a similar looking phone and an identical backpack was previously photographed using a Pixel 3 XL late last week.

A @MobileSyrup reader spotted this possible Pixel 3 XL photo in the wild on the streetcar in Toronto, Ontario today. Our team thinks the photo is legitimate, especially given the big notch and substantial chin. Do you think this is a photo of the Pixel 3 XL? pic.twitter.com/nPTGHmIVUO

In both cases, these images were taken by someone riding Toronto's mass transit system. Given the Canadian environs and well-manicured hands, it's possible that the person using the phone is a YouTuber that took up Famebit's previous offer for an early look at the phone. Google does also have a Toronto office, though, so it could simply be an employee using it out and about.

Samsung Galaxy Note9 durability test finds removable buttons are the closest thing it has to a ...