Spending $1000 on a smartphone is something we'd all probably have balked at just five years ago. How times have changed.

The Galaxy Note9 is Samsung's first mainstream handset to crest the magical four-digit mark, and I sincerely doubt it will be the last. Thousand dollar phones are the new normal, and for all that is excellent about the newest Note, that we've reached this point still seems fairly inevitable. Last year's Note8 was $930, this year's is $70 more than that - and it's easy to see why: The Note9 starts at 128GB of storage and 6GB of RAM, and packs in a larger 4000mAh battery. Double the storage and 700mAh of additional battery make that price hike seem eminently reasonable.

New features are, honestly, quite thin otherwise. The S Pen now has Bluetooth, and that really is probably the biggest change aside from the aforementioned storage and battery, which collectively end up mattering a whole lot more. And while the Note isn't the "best" smartphone in a lot of categories, it is very close to being the best in many.

Our Note 9 review is sponsored by dbrand, crafters of fine-lookin' mobile skins. Read more about drand's skins for the Note 9 after the conclusion. 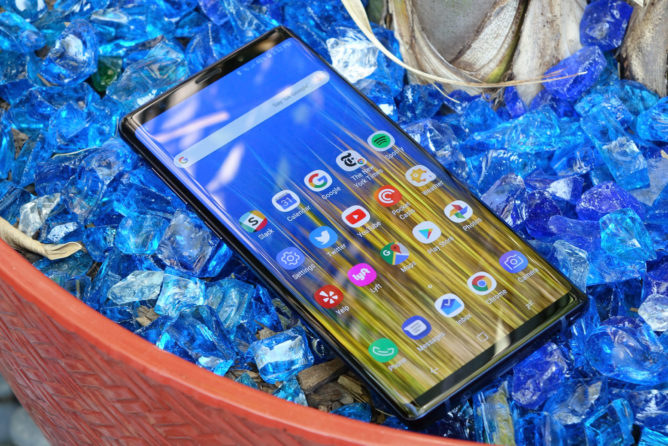 The Galaxy Note9 looks like a squared-off Galaxy S9+. This should surprise absolutely no one, and the design language of the S9, S9+, and the Note 9 is so closely shared that the phones are legitimately difficult for anyone but a phone enthusiast to tell apart. While I think Samsung's attention to detail and fit and finish are second only to Apple, I do think this hardware aesthetic is getting really tired.

Samsung introduced its "new" hardware look way back with the Galaxy S6 in 2015, with last year's Galaxy S8 having been the most significant evolution of the style to date. Samsung's phones aren't ugly - far from it - but they feel exceedingly conservative, much like the two extremely boring colors Samsung will offer US customers, which I've come to call Bleh Blue and Not Very Violet. Give us some bright, fun colors, Samsung. Or at least give us some new materials like titanium or ceramic. After all, a thousand dollar smartphone probably deserves to feel a little special, something Apple really nailed with the iPhone X's beautiful polished stainless steel frame. 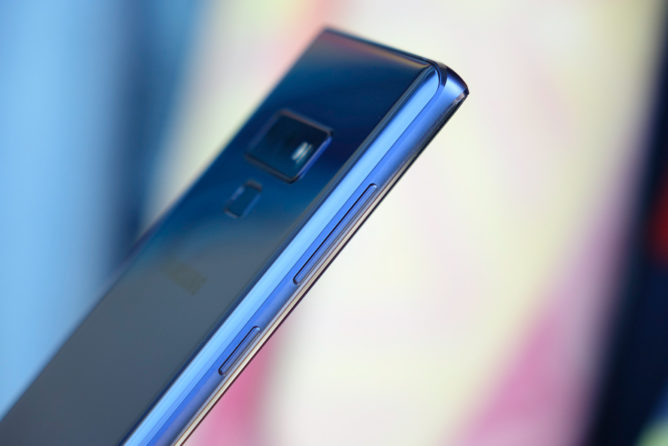 As always with Samsung, the power button is on the right of the phone and the volume rocker on the left. The buttons are nice and clicky and, apart from constantly accidentally hitting the Bixby key, I quite enjoy using them.

One design element I find objectively objectional is the fingerprint scanner. The placement is far too high up on the phone, in a very unnatural position to reach. Even after a week with the Note9, I'm still constantly finding myself doing the back-of-the-phone finger dance to feel it out. A case might make it a little easier, but would make the already significant stretch even more of a nuisance. I wish I could say just using Intelligent Scan instead is easier, but it's not, and the system consistently fails to recognize me or my irises even after resetting my face and eye data multiple times. When it does recognize me, the response is slow. So, you get the worst parts of Face ID (slowness, doesn't work when laying down) with even further reduced accuracy. Samsung, you can do better. 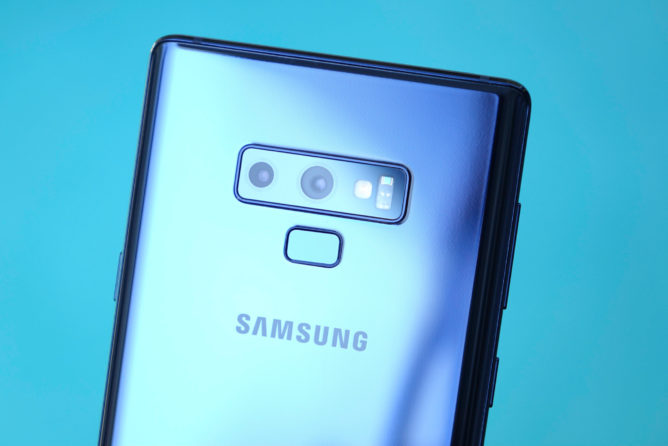 This fingerprint scanner is way too high up on the phone.

Fortunately, that's about the low point of the hardware. The Galaxy Note9 is IP68 water resistant, has a headphone jack, supports Samsung's unique MST payment tech via Samsung Pay, and features a new-and-improved S Pen. As you're probably aware by now, the S Pen is getting Bluetooth, allowing it to be used as a remote control for things like the camera shutter or a slideshow. People have been asking for this kind of functionality in the Note's S Pen for years, so it's good to see Samsung finally making good on it. The S Pen - which uses a supercapacitor, not a battery - will last for 30 minutes on standby outside the Note9 unused, or for up to 200 pen clicks (yes, really - it's almost exactly 200, I checked). Stick it back in the phone, and it'll be fully charged in just 40 seconds. The pen still works in its semi-passive mode even when the battery is dead, of course, so you can keep on pointing and doodling to your heart's content. 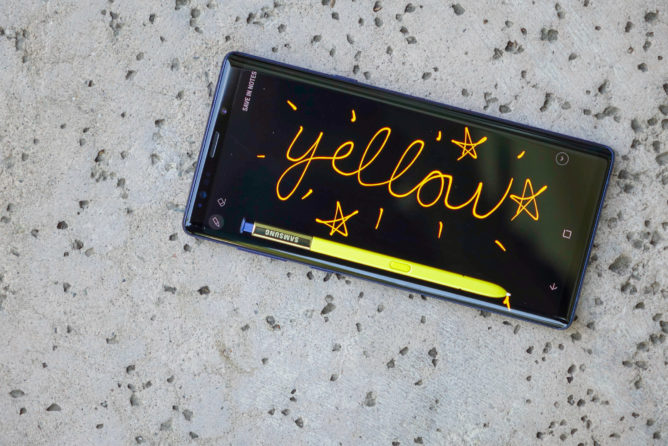 The display is absolutely brilliant, and remains one of the best reasons to buy a Samsung smartphone. It's bright, vivid, and if you set it to the "basic" mode, exceptionally accurate. The Note9's speakers are also quite good, and produce admirably full and clear sound even when pushed to the limit of their output.

As to what's in the box? You get a standard Samsung adaptive fast charger (peak output of 15W), a pair of AKG-branded Samsung headphones (they're pretty decent, but the fit kind of sucks for me), a USB-A to C adapter for transferring data from an old phone, and a USB-A to C cable. Note9 pre-orders will also get their choice of a pair of AKG wireless headphones (MSRP $299) or 15,000 Fortnite V Bucks, neither of which are shown here. 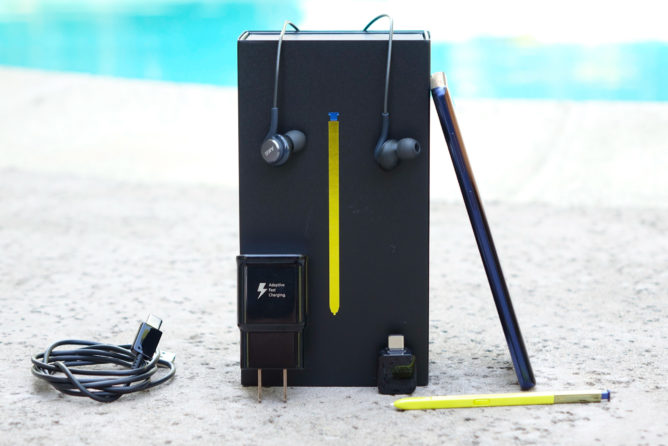 The Note9's cameras are effectively unchanged from those on the Galaxy S9+. That means a standard rear camera, a 2x "zoom" telephoto rear camera, and an 8MP front-facing camera.

The Note9's cameras take great photos, just as the S9+'s did when I reviewed it earlier this year. The only real difference is that the Note9 now has an AI-powered scene optimizer similar to what you'd find on LG and Huawei smartphones, which adjusts the photo processing technique based on 30 or so potential image categories like flower, nature, landscape, food, or portrait.

In my experience using the phone, this feature amounts to little more than a rather heavy-handed Instagram filter pass. I actually found it made some photos worse, introducing lowlights where none were present when I had the AI mode turned off. Thankfully, it can easily be disabled from the camera settings. Yes, if you're in the market for a smartphone this fall. Here's the skinny: it's extremely unlikely that anything LG or Google will announce this fall will significantly best the Note9 from a sheer capability perspective. The Note does and has just about everything - it's the Swiss Army knife of smartphones. Add in the unique capabilities of S Pen, and I think the Note9 represents the very best Samsung has to offer at the moment.

The Note does and has just about everything - it's the Swiss Army knife of smartphones.

By doubling up on storage and boosting the battery capacity, Samsung has taken what was an attractive proposition with the Galaxy S9+ and made it far harder to resist. Of course, the price you pay is... the price. A thousand dollars is a lot of money. But the Note9 is the best smartphone you can buy right now, because I think that for most people it represents the best all-around smartphone experience. The battery lasts a long time, it has room for all your stuff (and more, via microSD), it can go underwater, there's a headphone jack, wireless charging, you can pay for stuff with it at most credit card terminals, it has great cameras packed with features, and you can get it on any carrier.

If you're deciding whether or not to hold out for the 512GB version of the phone with 8GB of RAM, I'd say save your time and money: $250 is a hell of a premium, and it's an obvious fanboy tax. Get the 128GB, buy a big microSD card, a good case, and a nice dinner out.

Anyway, as someone who has generally preferred Google's Pixel phones for their unadulterated software and pure Android experience, even I can understand why Samsung's phones have appeal. The Note is the best of those phones, and it's easy to demonstrate why. They're not without their shortcomings, of course - no phone is free of them - but as something you'll have to live with for two years, the Note9 feels up to the task.

The Note9 isn't especially exciting, ambitious, or revolutionary. And it's also proof that a truly excellent phone - indeed, the best one you can buy right now, and likely in all of 2018 - doesn't have to be.

If you have $1000 to drop on what is probably the best smartphone money can currently buy, because the Note9 pretty unquestionably is.

If you don't like really big, really expensive phones - or timely Android OS updates are very important to you. 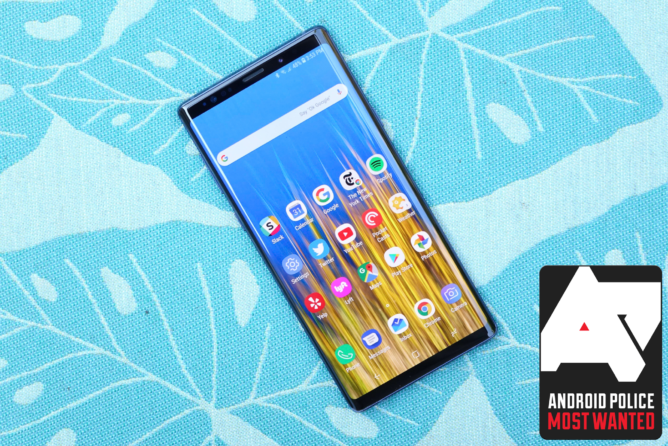 The original Galaxy Note was the device that ushered in the era of the big phone. The Note 9 continues this tradition, with striking design and an XL body, complete with a huge slab of slippery, fingerprint grabbing, scratch happy glass just waiting to be scuffed and marred. You can prevent this mess with a dbrand skin. Rock it by itself, or put one on under your case to keep your back pristine. 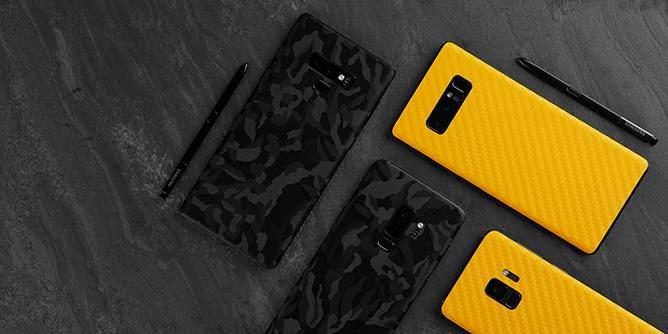 A dbrand Note 9 skin will protect your glass back while enhancing your grip. With dozens of colors and textures to choose from, there's guaranteed to be an option that matches your look. They are available to purchase now – you can have one shipped to your doorstep before your phone arrives for protection from day one. Never settle for fingerprints, grab your dbrand skin now – shop online at dbrand.com.