A big new set of services began rolling out to Firebase users today. Google's mainstream service for push messaging and other app services just announced an assortment of new capabilities. The big addition in this update is a new in-app messaging feature that enables quick announcements and offers to users, and can be tied to certain user behaviors. There are also big revisions to the management console and statistics tracking views, upgrades to the Crashlytics services, a new history view for Remote Config, and more. 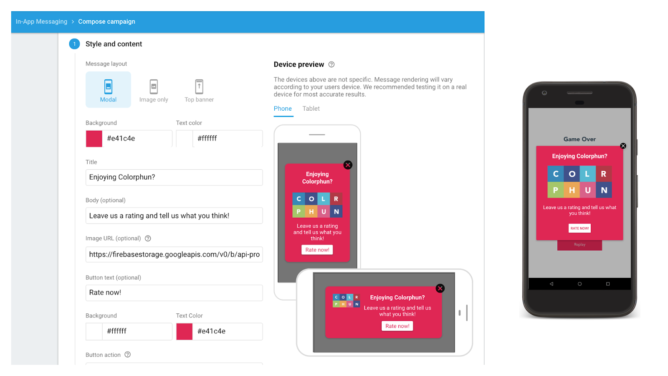 Developers can now send targeted custom messages directly to users of their apps without building in additional interface elements to display them. The messages can be crafted with a few simple layouts and an assortment of properties like text for the title and body, background color, a featured image, and buttons.

Messages can be limited to just users with certain OS or app versions or in reaction to certain actions within the app. There is also support for behavior prediction, so Firebase can try to identify users that are likely to uninstall an app and offer perks for giving it another try.

The Firebase reporting dashboard has been updated to give developers a more complete view of their messaging stats. This will make it easier to see performance of messages, particularly how many people are seeing them and whether users are engaging. Beyond just the standard tracking, this will now also include messages sent directly from the console.

The project overview page is also going through some big revisions to put more information into view. There will now be views for performance issues, notification and A/B test status, usage and health data for Firebase services, and so on. The Latest Releases section will also show live data so you can leave the page open without regularly refreshing it to see how things are running. These console-specific changes are starting their rollout today, but they might take a couple of weeks to reach all accounts. 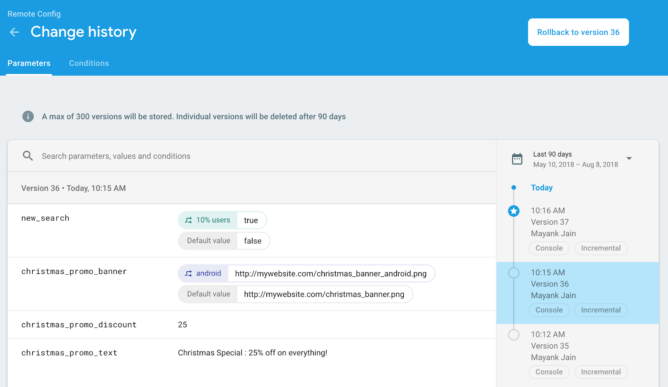 If you're putting remote config to use within an app, you may have run into situations where you can't be sure exactly what old settings were at certain historical points. That won't be a problem any longer because Firebase is adding a change history for the remote config system. Records are only stored for up to 300 versions with a maximum age of 90 days, so you're not going to be able to keep a full history, but this should be enough to be able to track recent changes and spot issues that arise if more than one team  is involved in changing those settings. This particular change will be rolling out over the next few days, so it might not be ready for your account if you're checking in today.

For Crashlytics users, it's now possible to export crash logs to Google's BigQuery or save them so they can be examined by any other tool that you might want to use. Integration with Jira Software is now also supported so crashes can be more easily tracked. Exports should already be available, but the Jira Software integration should be going live over the next few weeks.

While the Firebase and Crashlytics improvements are quite significant, there have also been a few other recent changes and announcements to highlight. The performance standards for Cloud Firebase and Cloud Functions were recently raised and can achieve 10,000 writes per second to the database and 1 million concurrent users. Cloud Functions is also backed by an SLA guaranty with 99.5% uptime, and there are plans to expand to coverage to more parts in Europe and Asia over the coming months.

Firebase is also planning another updating in a few weeks that will allow for individual projects to contain multiple websites.

Check out the Firebase Blog for more details and links to the specific developer docs.