Okay, I know endless runners are played out at this point as far as mobile games go, but every once in a while something lands on the Play Store that bucks the trend. The newly released Bendy in Nightmare Run is one such game. Not only does it use a slick '20s cartoon theme for its art design, but the swipe-based gameplay isn't all that bad either. So if you are ready for a very challenging endless runner that contains some of the coolest graphics on Android to date, Bendy in Nightmare Run is a perfect choice.

The first game comparison people are probably going to make when looking at this title is that it clearly resembles the look of Cuphead, a console and PC platformer that notably used a '20s cartoon theme for its graphics. Many may not know the developer of Bendy in Nightmare Run has a game on Steam with a similar look that actually predates Cuphead. So while the overall idea may not be as original this time around with the release of this mobile endless runner, I'd say the charm of the design wins out in the end. There is no arguing that Bendy in Nightmare Run is a gorgeous looking game.

I would imagine most readers around these parts are familiar with the mechanics of an endless runner, but for those that may not know, here is what you can expect. You swipe left and right to switch lanes, of which there are three. You can also swipe up to jump, or swipe up twice to double jump. As you are running away from a giant boss, you will want to collect as many of the cans that are scattered on the ground as possible. You will also want to grab any weapons lying around so you can throw them at the boss chasing you, which is crucial for completing each level. The cans you collect are used as in-game currency for unlocking new levels, costumes, and weapons. There are also plenty of powerups you can purchase, and these will help you survive longer during each run.

One thing that tripped me up when I first started playing is that your character is running towards the screen. At first, I was at odds with this as most endless runners display your character running away from the screen. I suppose it works out the same in the end, but it definitely feels a little weird at first.

I would also like to mention that this is a very challenging game. You will have to work at completing each level, and it will never come easy, even if you use some optional powerups. As you make your way forward through a few levels, things start to click, but if you don't enjoy a challenge, this is not the game for you.

As far as monetization is concerned, this is a free-to-play release, which means there are plenty of in-app purchases, and they run as high as $54.99 per item. They are used for purchasing the in-game currency of cans. Luckily new levels, costumes, and weapons are locked behind progression (though you still have to unlock them with cans), so there isn't much of a way to cheat. Oh, and there is also a really cool merchandise shop included in the store where you can buy physical vinyl and plush toys.

Noticeably Google Play Games Services support is missing, but at the very least there is an option to save your game in the cloud, though you will need to create an account for the game. Obviously, it would be easier to use our Google accounts to do this, but then cross-OS game saves wouldn't work. 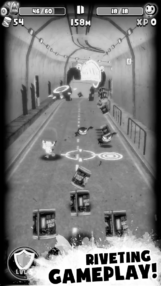 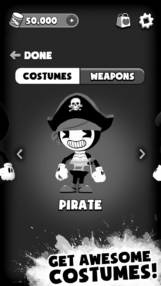 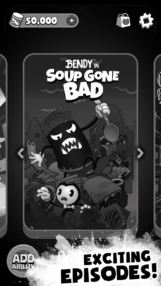 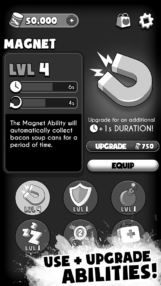 All in all, I think Bendy in Nightmare Run is a great looking endless runner that provides some very challenging gameplay. Sure, the mechanics largely work just like every other endless runner out there, but to be honest, it's the polished presentation that allows this title to shine. The constant threat of a giant boss killing you surely makes for some hectic moments during each run, and it is nice to see that even though the IAPs are on the higher side, there is no way to abuse them to make the game too easy. So yeah, if you love endless runners, or are looking for a robust challenge to work your way through, Bendy in Nightmare Run should fit the bill nicely.