You can usually get a good idea what OnePlus' next phone will look like by keeping tabs on Chinese smartphone maker Oppo. The two firms share the same parent company and quite a lot of design resources. The R15 was a dead ringer for the OnePlus 6, and the R11S was basically the OnePlus 5T. The new R17 may very well be the foundation upon which OnePlus builds the still-unannounced 6T, and that could be cause for excitement. This phone has a tiny screen notch, slim bezels, and an in-display fingerprint sensor.

Most of the screen notches we've seen thus far are rather hard to ignore. They take up a significant chunk of the screen, and some make the status bars unnecessarily tall. Even the OnePlus 6, which does the notch surprisingly well among Android phones, eats into your screen real estate. The R17 has a small "dip" in the bezel that makes room for the front-facing camera. It's really quite subtle. The bezel look symmetrical around the top and sides, but the bottom is still a bit larger. It has about the same chin as the OnePlus 6/R15. 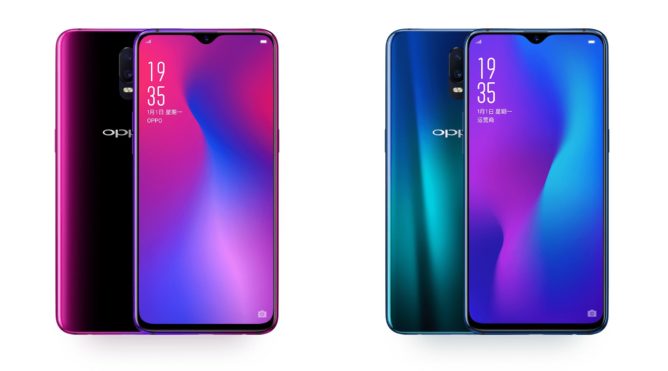 The R17's display is 6.4-inches and has a resolution of 2280 x 1080. The fingerprint sensor is built into this panel near the bottom. There's 8GB of RAM inside along with 128GB of storage. It runs on the new Snapdragon 670 chip, which is a mid-range design. That's common for the Oppo R-series, but OnePlus always upgrades the internals to run on the latest Snapdragon SoC. The R17 has a 3,500mAh battery with VOOC fast-charging, as well.

If OnePlus does take this phone and turn it into the 6T, we should hear all about it in the coming months. Let's hope that notch is as small in real life as it is in the render. It could really put Google to shame with that giant Pixel 3 XL notch.