Motorola is still pumping out successful mid-range and budget phones, but a smash-hit flagship device has eluded it for years. The Moto Z phones with their modular accessories have potential, but consumers aren't running out to buy many $200 projectors or $130 photo printers. If you ignore the Moto Mods, past Moto Z flagships have at least been top-of-the-line phones with uncluttered software and modern specs. That's what makes the new Moto Z3 so perplexing. It's specced like a phone from 2017. Plus, it's exclusive to Verizon.

The Moto Z3 will eventually be the first phone with 5G support when the Verizon 5G Moto Mod comes out. Until then, it's just another Android phone. In fact, it's basically a Moto Z2 Force with a different screen and a few design tweaks. It's odd for Motorola to sell this phone in 2018, but Verizon is keeping the price low at just $480. Even with the mid-range price, it's not a particularly appealing phone.

Looking at the recently launched Moto Z3 Play next to the Z3, you'd be hard-pressed to figure out which is which. In fact, it would be almost impossible to tell if not for the Z3 Play's slick blue cassis color. Otherwise, the two phones have identical physical design and dimensions. Up front is a 6.01-inch 1080p OLED panel with an 18:9 aspect ratio—I believe it's the same panel. It fills most of the phone's face, but there's still room for a Motorola logo down at the bottom. 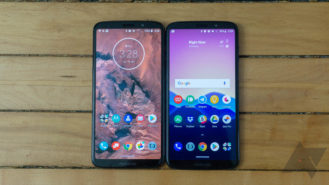 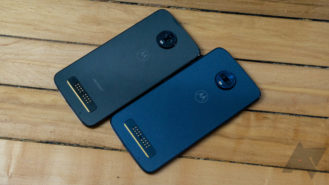 The Moto Z3 and Z3 Play are very, very similar.

Moving around to the back, things are going to look awfully familiar. There's the big, round camera module with a pair of sensors that protrudes from the glass back by several millimeters. The Moto Mod contacts live down at the bottom of the back panel. 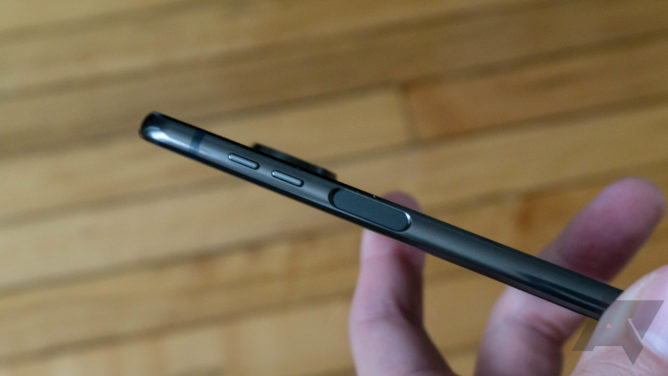 The Z3 looks the same as the Z3 Play on the outside, but there's one notable change on the inside. Rather than the mid-range Snapdragon 636, we've got the Snapdragon 835. That's a much faster chip, but it is last year's flagship SoC of choice. RAM, storage, battery capacity, and sensors are all the same.

This phone ships with Android 8.1 Oreo and Motorola's usual build of Android. That means you get Moto Display for quick access to notifications without waking the device up from sleep. Moto Actions also lets you toggle features like the flashlight by manipulating the phone. However, this is Verizon's show, so there are some carrier modifications you won't be crazy about. We'll get into that later. 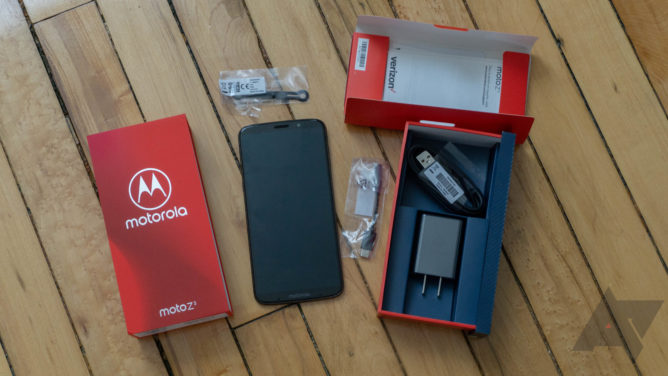 There are no included Mods with the Moto Z3 like the Z3 Play, which offered a free battery Mod. The Z3 box includes the phone (obviously), a 15W USB-C charger, a USB to 3.5mm adapter, a cable tie, and the usual bundle of manuals and warranty fliers. No, the 5G Mod isn't in the box. That will come out later, and it'll cost extra. 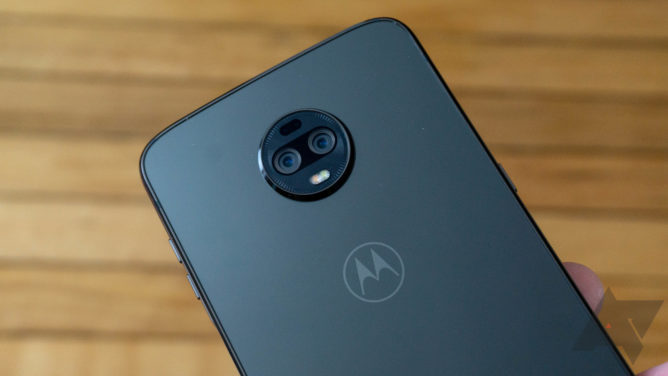 The Moto Z3 has dual 12MP cameras; one RGB and the other monochrome. The secondary sensor gathers depth information in portrait mode, and you can switch over to it for true black and white shots. Motorola used this same setup for the Moto Z2 Force last year. Here are some camera samples. Probably not. Pretend for a moment this phone came out in 2017—it could have been a contender. The biggest issue with the Z2 Force was the ShatterShield screen that picked up scratches and dings almost immediately when you started using it. The Z3 has a regular OLED panel and similar specs, right down to the Snapdragon 835. The Moto Z3 might as well be the non-Force Moto Z2. It should have existed in 2017, but it didn't. In 2018, this phone exists entirely at the behest of Verizon.

The Snapdragon 835 is certainly no dog. It's fast and supports most of the same core technologies as the newer SD845. Since this phone ships with Oreo, it has Project Treble. That means having a chip that's already a year old shouldn't negatively impact updates. Motorola definitely doesn't need any more reasons to be slow with updates. The software is optimized well for the 835, and there's no appreciable lag. I just can't shake the feeling that this phone could have been more efficient and snappier if it wasn't a generation behind in hardware. Moto is adamant that specs matter more in certain markets, but they still kind of matter in the US.

The only improvement over last year's flagship Moto Z comes with a tradeoff. The display is now a 6.01-inch OLED with an 18:9 aspect ratio. That means the bezels are much smaller, and you get more screen real estate without a larger chassis (Moto can't really make the body larger anyway thanks to Moto Mods). However, the OLED panel is only 1080p. That's lower resolution than last year's phone and the same as the Moto Z3 Play. This probably helps keep the price down.

The larger screen meant Motorola needed to move the fingerprint sensor from the front of the phone. The Mod platform ruled out the back, so the sensor landed on the side. It's on the right, and there's a separate power button on the left edge. I didn't like this on the Z3 Play, and my opinion has not changed. It's too easy to trigger that sensor while picking up the phone, and getting used to the button on the other side is harder than you'd expect. 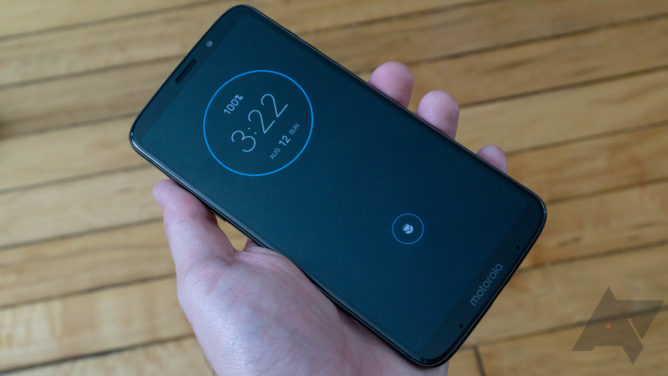 Because the Moto Mod platform remains unchanged, the back of this phone looks like every other Moto Z phone since 2016. It's flat and has a big, round camera module protruding from the surface. The Mod connectors are down at the bottom, and they make the phone look "unfinished" when you don't have anything attached.

This phone has a typical 3,000mAh battery, just like the Z3 Play from a few months ago. Qualcomm's latest chips are a bit more efficient than the 835, but the screen is also lower resolution than the Z2. As a result, the battery life has been very middle of the road. The Z3 will make it through a day but not much more. It charges at 15W on USB-PD chargers, and you can always get a Moto Mod battery. Those are really the only Mods that make sense to me.

In bright outdoor light, the Moto Z3 takes crisp photos with good detail. The most significant issues here is shutter lag, which is noticeable even in perfect conditions. The mediocre HDR processing can be overwhelmed by exceptionally bright areas, and dark areas lose detail. All these issues become more pronounced in less than perfect light. Even inside during the day, the Z3 uses much longer shutter times than I'd expect. In poor lighting, I have to give Motorola credit for keeping noise low. However, there's not much detail, and dynamic range is lacking. The camera is slightly better than the Z3 Play, but the OnePlus 6 is better. The cameras are the same as last year, and they don't seem markedly different to me. A $700 phone with these cameras was a tough sell, but I can forgive a bit more when the phone is this cheap. 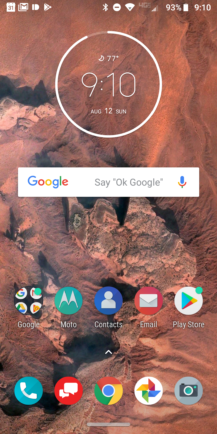 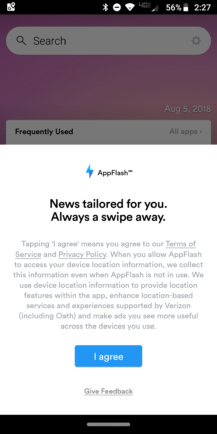 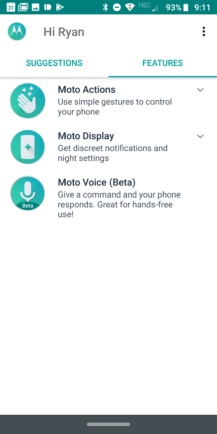 Motorola hasn't introduced an exciting new software feature for a long time, but some of the old features are still great. Moto Display is a useful way to check notifications without waking the phone up. I also love some of the Moto Actions like the flashlight chop and twist for the camera. Verizon has really had its way with the software on this phone, though. There's There's the usual Verizon-branded bloat as well as other junk like Slotomania, SmartNews, WordBlitz, WeatherBug, and more. It's a lot. The home screen also has Verizon's awful AppFlash service in place of the Google Feed. Luckily, you can go into the settings and restore the Feed.

Both the Z3 and the Z3 Play push the Mod platform but in different ways. The Z3 Play has a cheap battery Mod in the box, and the Z3 exists entirely to facilitate the launch of the 5G Mod on Verizon. In the meantime, you can buy other Moto Mods to use with the Z3. They'll all work as the Mod platform is identical on this phone. That's impressive consistency from a smartphone maker, but most Mods aren't very useful. The batteries are a reasonable purchase if you're constantly running out of juice on the road. The $200 projector and $120 photo printer? Not so much. If you're not going to use Mods, you can at least smooth out that back panel with a Style Shell, right? Not if Moto has anything to say about it. There are zero style shells currently in stock on the Motorola website. 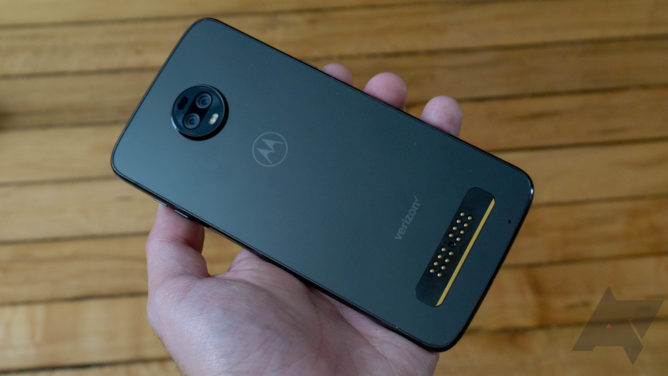 For the first time, Moto's budget flagship Z Play-branded phone is more expensive than the regular Z-series phone. Verizon will charge $480 for this phone, which is actually a solid deal for a Verizon phone. Yes, it has last year's Snapdragon SoC, but a Note 9 is more than twice as expensive. Even a OnePlus 6 costs more. The low price is not just a function of the older hardware (though I'm sure that's part of it). Verizon is also subsidizing the cost of this phone because it wants to move 5G Mods next year. I would wager the Moto Z3 with a 5G Mod will bring it up to the standard flagship phone price range. If you're not jonzing for 5G, there's not much reason to buy this device.

You're stuck on Verizon, and you want to get access to 5G service as soon as possible. You also think Moto Mods are a good idea in spite of all available evidence.

You're on any other carrier, or you're a Verizon customer who wants a phone with a better camera or current-gen hardware. Paying more for a phone with those things isn't a problem for you.