By now, everyone who's been paying attention to news about Fortnite on Android knows that it'll only be available via Epic's site after the Samsung exclusivity period ends, and not on the Play Store. However, the millions of kids who just want to play the latest and greatest game probably aren't aware of that. Thankfully, the Play Store is finally doing something about it. 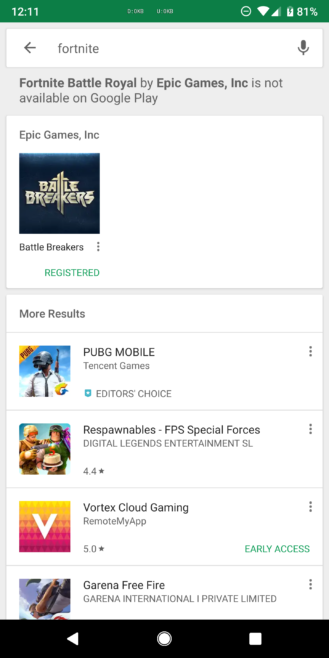 If anyone at Google is reading this, it's spelt 'Royale,' not 'Royal.'

Fake games on the Play Store have been a problem for some time. No-name developers often blatantly rip off aspects of popular games like their names and app icons off, misleading people who don't know better to install them.

This is the first time we're seeing a warning about a specific (very popular) game not being available, and it's much appreciated even if there's a spelling error. It's only visible on the Play Store app, but we doubt those looking for Fortnite will be using the site anyway.