If you've searched for an Android tablet in recent years, especially one in the premium segment, you've probably noticed that there are precious few options available. No Android manufacturer comes close to matching Apple's portfolio, and the one OEM that has dared to challenge the iPad's supremacy - Samsung - has generally done a pretty unremarkable job.

That hasn't stopped them from trying, though, and Samsung's back at it again with the Galaxy Tab S4, the latest and most expensive entry into the Tab lineup to date. Last year's Tab S3 started at $600, already a pretty eye-watering price for an Android slate, especially given the operating system's distinct lack of tablet-optimized apps (or even much in the way of a tablet interface). The all-new Galaxy Tab S4 keeps pushing the envelope directly into iPad Pro territory, with an MSRP of $650.

I'll cut to the chase: for all but the Samsung diehards, this tablet simply isn't worth the money, and for anyone hoping that DeX and a $150 keyboard dock bridge the tablet and laptop divide better than a Chromebook, you'll be sorely disappointed. 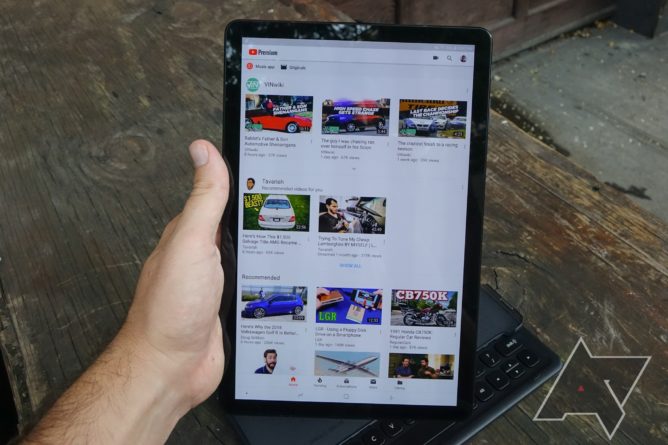 As a tablet, the Galaxy Tab S4 is just what you'd expect on Android in 2018. Very few apps from the Play Store have tablet-optimized layouts, and many simply look weird on a display this large (10.5 inches). The last time anyone really cared enough to "try" with large-format tablet content on Android, Andy Rubin was still running things, and Android on tablets at all was still a very novel concept. It's been downhill since, and not counting video players or games, the number of popular apps that make effective use of this kind of real estate could probably be counted on two hands. So, if you're expecting Android to suddenly be at content parity with the iPad, sorry: it's not even close. The iPad has many tablet-optimized apps - like advanced text editors, music creation, illustration, and graphic design apps - that don't even exist on Android in the first place. If you want to use a premium tablet for "real" work in addition to being a content consumption device, the iPad is still the only game in town. 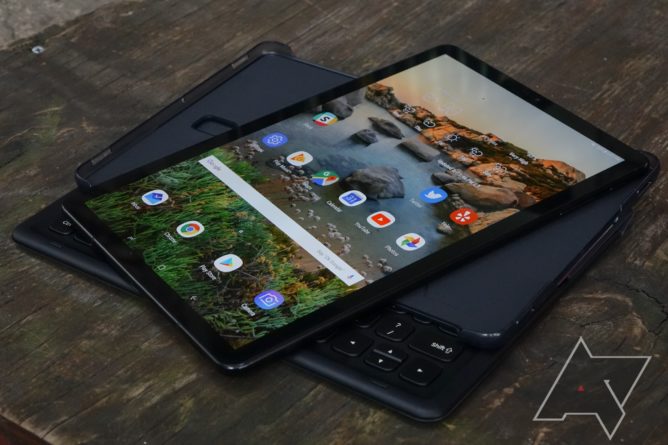 When it comes to content consumption, the Tab S4 is quite good. Netflix and YouTube HDR support are things even Apple's tablets can't offer yet, and the Tab's brilliant Super AMOLED display is an excellent canvas. There probably isn't a better portable device on the market for watching high-quality video - blacks are insanely deep, contrast is outstanding, and viewing angles are nigh-unimpeachable. The same goes for games, so long as you're not missing out on any effects or performance optimization limited to iOS devices (and that's far less common these days). I will say I wasn't especially impressed with the speakers - the quality of sound is good, but the maximum output was pretty wimpy compared to my Pixelbook.

The Tab S4 is very nice as a walkabout device, as it weighs around a pound and is just over a millimeter thick. It'll fit in basically any bag, but I do highly recommend a case given it has a glass rear cover. On the back, you've got an 8MP camera, and on the front you have a selfie camera and Samsung's iris scanner. The iris scanner works OK in portrait mode, but I find that for anything needing a "secure" authentication - like Samsung pass - in landscape mode that it's a huge pain in the ass. The number of bad reads I got was far greater, and the angle you have to position your head since the scanner is on the left hand (and also, where you put your left hand) side on the screen is weird and unnatural. 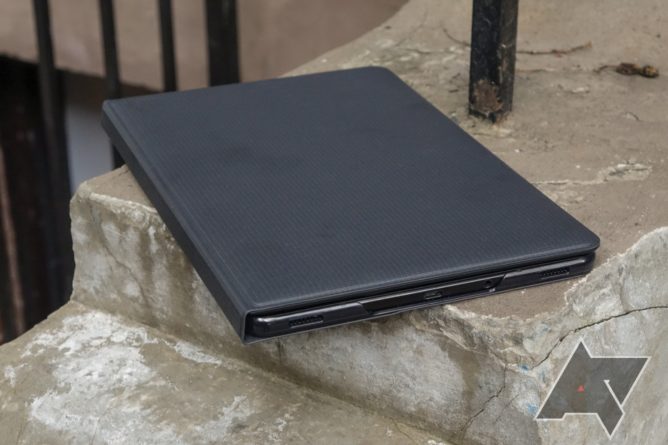 The Tab S4's keyboard folio will keep it safe, but it's far too bulky and cumbersome to use as a real "case" in tablet mode.

On the note of cases, I really don't recommend the keyboard one at all if you want to use the Tab S4 foremost as a tablet. It's extremely bulky and slides all over the place when it's folded behind the tablet, and it's just flat-out annoying - you feel like you're constantly fighting it for a good grip. It's pretty terrible. Even as a stand, it's not great, supporting just a single position (docked mode).

Unlike the case, battery life is excellent, and Samsung significantly enlarged the capacity versus last year's Tab S3. If you're willing to be judicious with the display brightness, the S4 can go surprisingly long in laptop mode. Granted, my approach in these situations was to do basically everything in the browser, but I'll get all that laptop business in the next section. 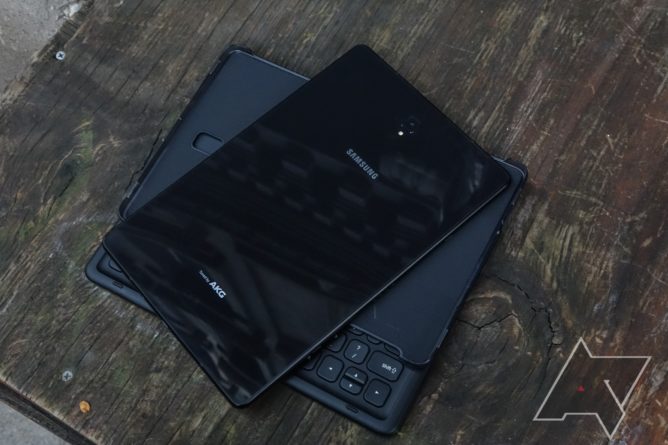 Samsung's big value-add proposition with the Tab S4 is that it's the first Galaxy device to feature the company's DeX interface in a mobile form factor. Simply slap the Tab S4 into the keyboard case's pogo pins to dock it, and DeX will automatically start up and send you to a desktop operating environment. You get a traditional desktop look and feel, and suddenly it's like you're using a real laptop. At least, for a moment. 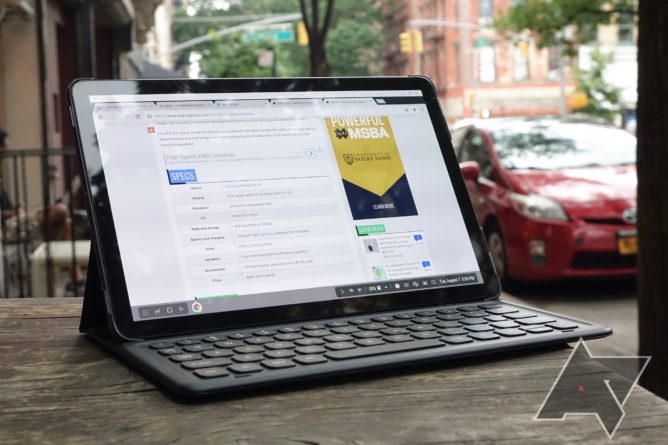 The Tab S4 sure looks the part of a laptop all done up in its keyboard case. Looks can be deceiving.

DeX was originally designed for desktop monitor projection - meaning a mouse and keyboard for input - and it really shows. DeX on a tablet with a keyboard dock that has no trackpad is a pretty tragic experience. Touch targets are far too small, switching between apps is laggy and unpredictable, and many don't support proper resizing aside from the select few Samsung has developed specifically for the DeX platform. 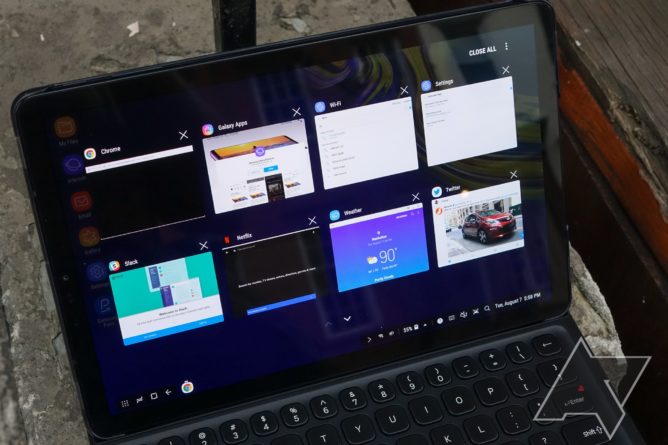 DeX has a kind of nice app switcher, but every time you switch to DeX mode, it puts all of your recently open Android apps in the launcher bar. I end up having to close them all - one at a time - every time I go into DeX. 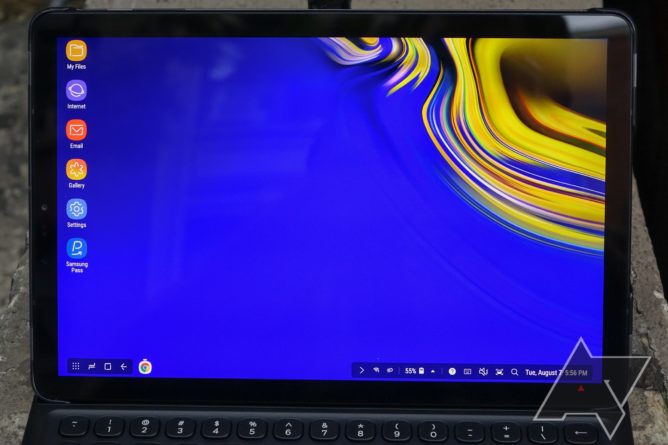 The Tab S4's desktop is laid out in a familiar way, but tiny touch targets make it pretty obnoxious to use.

A tablet that runs mobile apps, especially an Android one, doesn't represent a terribly complex set of features to emulate. But a laptop, even one that's "just a browser," represents a hugely more difficult task. Samsung's Internet browser is no match for desktop Google Chrome, and it performs like a dog even compared to the mobile version of Chrome that I ended up using on the Tab S4 in DeX mode. 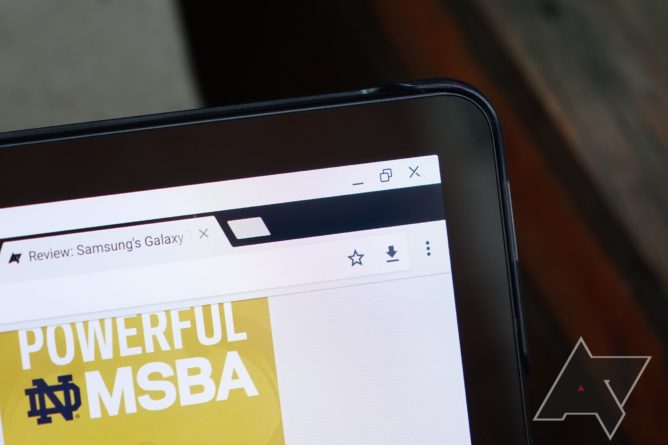 Chrome in DeX mode constantly refreshes when switching tabs, and it has this weird black bar between the tabs and window controls because it isn't DeX-optimized.

While Samsung's DeX has the look of a true laptop interface, the moment you start launching and using apps you're reminded that it lives inside the strictures of a mobile OS. Android has never been good with physical keyboards and mice, and for all of Samsung's optimizations, neither is DeX.

This ignores many of my other gripes, like the fact that the tablet doesn't turn on or off when you open or shut the keyboard case, or that many web apps don't refresh in the background because of Android's more strict memory and process management. That dismissing notifications must be done one at a time for no apparent reason. Or that many desktop websites expect you to be able to hover over content to perform certain actions, which you can't do unless you've got a mouse (this drives me insane with Gmail attachments, for example). That Android was never set up to be a "right-click" OS. That keyboard shortcuts for things like "delete" don't even seem to exist. That the keyboard sometimes just doesn't recognize that a character was pressed or adds in a second one because it's lagging. That tapping the "X" in the upper-right corner to close an app doesn't work half the time.

The list goes on, but I honestly don't have the room (or frankly, the motivation) to spell out all my various issues.

The Tab S4 isn't a laptop replacement, it's laptop cosplay.

No. The Galaxy Tab S4 is a pretty nice hardware package, but it's also everything that is wrong with Android tablets: scarce tablet apps for professionals and consumers alike, little interface optimization, and an extremely slim accessory ecosystem. And at $650, it's just way too damn expensive. Samsung's attempt to fill the gaping hole that is the Android tablet software and content experience with DeX isn't a complete failure, but it's so far from being a success that I can't recommend it to anyone. I wrote this entire review on the Tab S4, and I've been using it as my only laptop for several days now. When I return home to my Pixelbook, I'll be switching back immediately.

The Tab S4 isn't a laptop replacement, it's laptop cosplay. DeX is an incomplete vision, trying to force Android into becoming something it isn't, and something it's clear Google never wants it to be. DeX needs serious work if it's to approach even a Chromebook for getting serious work done, and I just don't envision Samsung putting the time and energy into that. DeX makes a great showroom demo, but in the real world, you still need a real desktop browser to get a real desktop browsing experience. And the fact that DeX runs Android apps isn't remarkable when every modern Chromebook out there does the same thing while also running a true desktop-class browser.

In short: if you want a great tablet, buy an iPad. If you want a tablet designed for "real work," buy a Surface Go or Pro. And if you want a lightweight platform for web productivity, buy a Chromebook. There's really no reason to even consider the Tab S4. 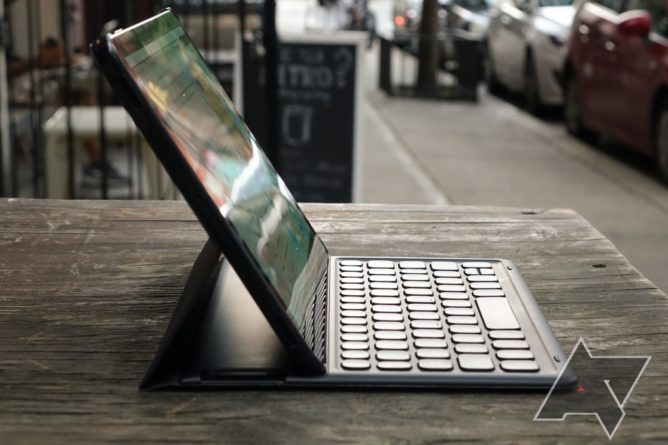 [Update: NBA League Pass] Heads-up: These are the networks you can access with TV Everywhere ...