As they say, "If you haven't got your health, you haven't got anything." Most of us probably don't realize that there's more to the subject than just diet and exercise, and how we use our phones can have an impact, too. Once upon a time, our work/life balance was separated by real, physical distance, but thanks to the magic of mobile phones, we can all carry our work home with us in the form of life-interrupting notifications. That's not to mention social media's constant dopamine drip, which keeps us all scrolling like zombies and wasting away the best years of our life envying the lives of Instagram "influencers," or learning random, pointless facts from Reddit.

Some of us are painfully aware of the negative impact these things have on our lives, as well as the so-called FOMO we experience when we cut ourselves off, but Google's new Digital Wellbeing toolkit may be able to help when it comes to exerting some self-control.

The feature was initially shown off by Google back at this year's I/O, but all throughout the Developer Previews, it was never revealed. I had personally assumed it was being held for Android 9.1 and the Pixel 3, but it was released just yesterday via its own standalone beta program and app.

Having spent the last day playing around with and testing the various features included, I think I have a pretty good idea of what it's like. It is worth noting that more functionality is still inbound: It's a beta, after all. At least one major feature—the "Shush" gesture shown off in the keynote that enables Do Not Disturb mode—isn't currently present, though former AP editor and current Googler Liam Spradlin claims it will be coming soon.

Of course, I may have learned how to set up and use the app's features in a day, and I may know how they look and behave in use, but I can't know how Digital Wellbeing is going to have an effect on my life in such a short time. To that end, I'll be following up with my long-term thoughts once I've had a chance to see how these features make an impact on my day-to-day life.

To get started with Digital Wellbeing, you'll need a Pixel phone on Android 9 Pie—either one of the 2016 Pixels or a Pixel 2 or 2 XL. If you meet that prerequisite, the official way to get Digital Wellbeing on your phone is via the beta program. You'll need to sign up with your email address and wait for an invite into the testing program. Once you're in, though, all you need to do is install the app which enables the feature from the Play Store. 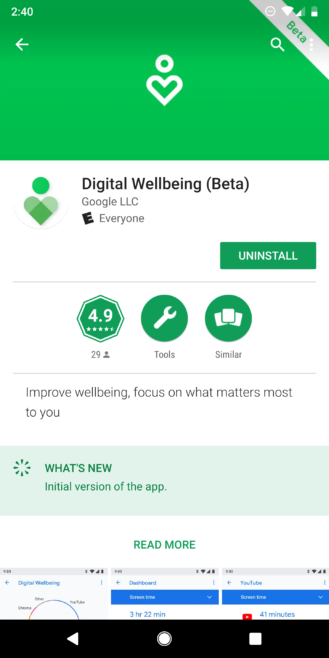 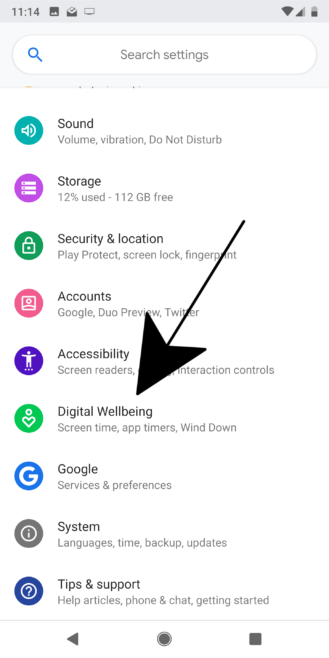 The other way to get the feature is by just sideloading the APK from APK Mirror. You'll still need a Pixel device (though there are workarounds for other phones that have gotten Android P), but you won't have to wait for an invite, which can take up to 24 hours.

Once things are set up, Digital Wellbeing will appear in your Settings app as a new option beneath Accessibility. As I see it, there are four main parts to the Digital Wellbeing package, so let's go through them one at a time.

Probably the biggest single issue with our collective digital wellbeing is that most of us aren't even aware of how much time we actually spend using our phones. They're insidious little devices packed with apps that creep into our lives in ways we don't consider. I know whenever I'm not actively doing something, at best it will be seconds until I've made my way to my RSS reader, Google News, or Reddit, and it almost doesn't matter what context or setting I'm in. 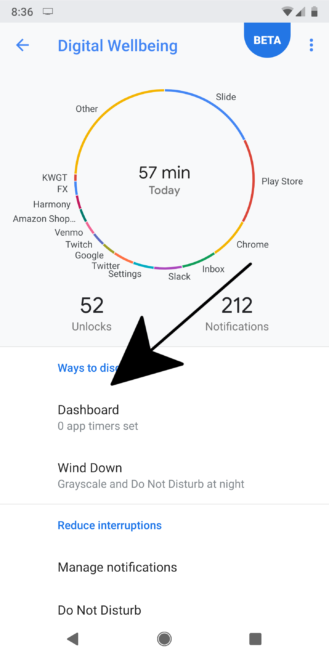 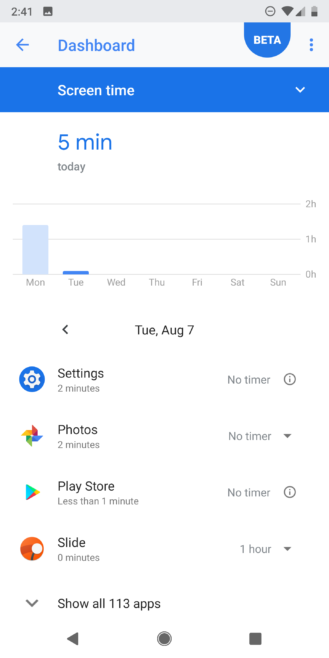 Enter Dashboard. It gives you a convenient and easy to parse overview of your phone use, presented in an attractive, almost /r/dataisbeautiful way. With it, you can conveniently track your screen time from day to day. Paired with the circle graph and data in the Digital Wellbeing overview—which, really, are a part of Dashboard as far as I'm concerned—you can determine your worst app offenders at a glance. It's all there, easily visible (though it does bug out, on occasion).

That information will come in handy in the next part of the Digital Wellbeing suite.

Once you know which apps you're using too often, App Timers inside Dashboard will help you set limits if you want to see a genuine change in your life. And it's surprisingly firm in how they're applied, too. Once you run out of time, it's game over. The only way to get into the app then is to admit defeat, dig back into settings, and disable the timer. This isn't just a warning you can easily ignore and tap past, conveniently brushing aside your failure to exert self-control. Unless you actually go in and acknowledge defeat by manually removing the restriction you placed, the app is locked out to you until midnight. 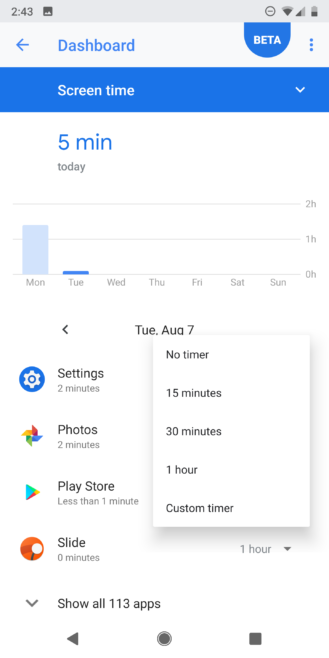 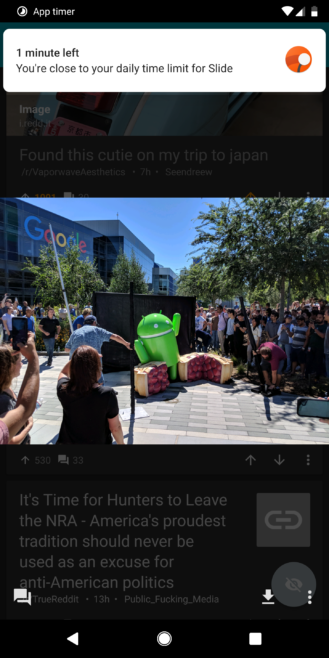 Just before you hit your limit, a warning notification will appear to let you know you're getting close. After you hit the wall, the app is "paused," and can't be run again until tomorrow/after midnight. The icon for the app is then also grayed out, and attempting to open it again is met with an "App isn't available" message. Again, the only way to disable it is to enter settings for Digital Wellbeing (though a shortcut is available via the "Learn more" button" on the notification). 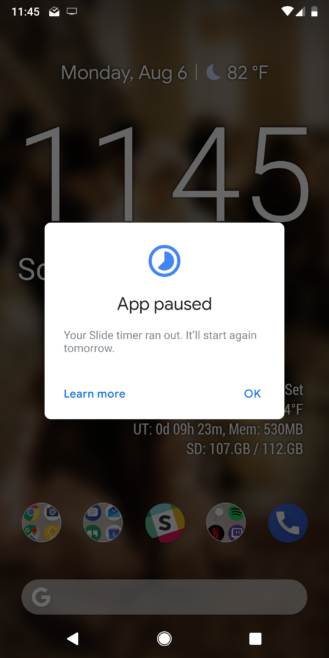 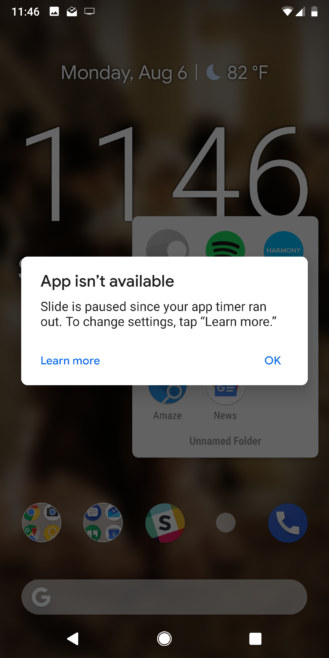 Some people are probably going to complain that this type of approach is bad, that there could be emergencies where you'd need to access an app and the extra time could be fatal, or that it's draconian and the most we really need is a warning. Those people are wrong. Remember: every restraint you impose via the App Timers is one you responsibly set yourself. If you're locking yourself out of a basic app like your dialer or SMS messages, that's your fault.

App Timers are meant to be used for things like social media, where we endlessly, mindlessly scroll down a feed of factoids, photos, and vapid bullshit. I know that I spend too much time during the day on Reddit, and now when I self-impose limits on how much I use my client of choice, I know I'll be following them. Actually going into settings to disable it would be far too palpable a defeat.

Of all the features in Digital Wellbeing, I think Wind Down might end up being my favorite because it's the one that forces you the most to be aware of your actions. When enabled, it's incredibly simple. Wind Down just changes your display to be monochrome. No big deal, right? But imagine all the apps that would kinda suck without color. 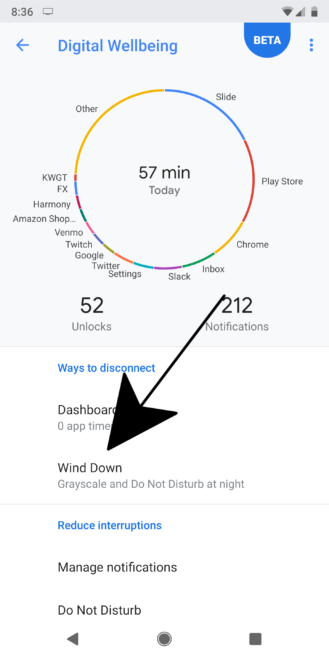 When paired with Night Light, it also means your phone goes through a progression at the end of the day, directly encouraging you to detach.

Night Light, for the unfamiliar, tints your display red at certain times based on a configurable intensity and schedule. Personally, I go for sunset/sunrise (and I wish the transition between states were smoother). Wind down is similar in that it further pushes your display to be monochrome at certain hours to discourage use. 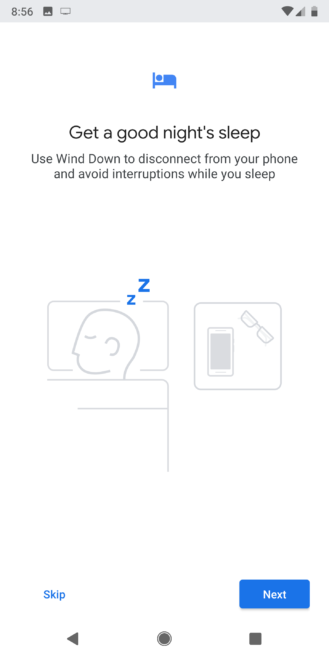 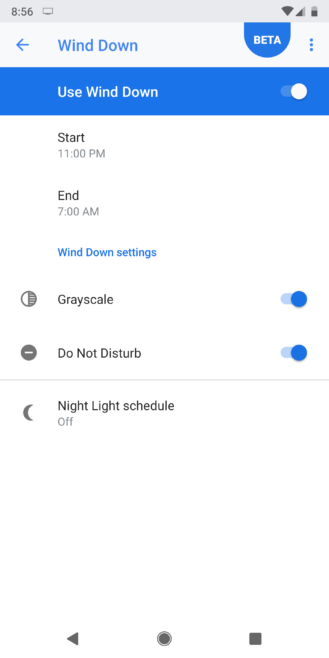 For me, that means my display starts turning red around when I stop working in the summer, and it flips into monochrome when I really should probably be in bed. Not having a color display for a few hours out of the day doesn't really remove any functionality, but it makes you intensely aware of the fact that you're using your phone when you shouldn't be. Reddit and Twitter just don't have the same feel without color, in part removing a bit of the sense of reward we all get mindlessly consuming a feed of dopamine-providing content. 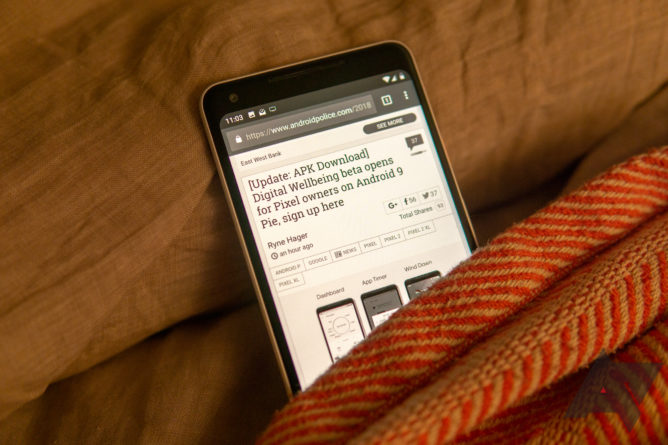 Screenshots taken in Wind Down mode are still full-color, so instead, enjoy a photo of my phone tucked into bed.

It's hard to disable, too, and that's a good thing. You have to dig into the Digital Wellbeing settings to turn it on or off, there's no easy toggle in the quick settings like there is for Night Light if you decide to change your mind.

Between Night Light and Wind Down, my day should have a much better sense of progression. 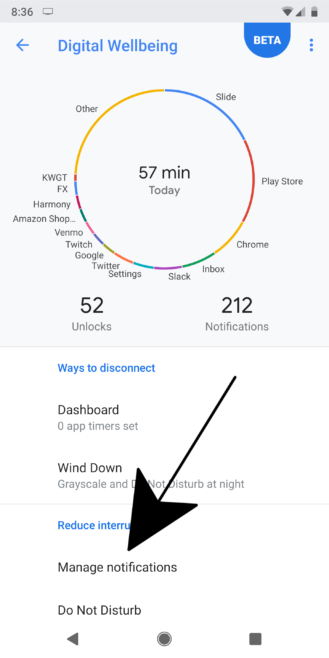 Even so, Google has included them as part of the Digital Wellbeing package because they work together with the other features above in a two-pronged approach to diminish phone use. The Dashboard, App Timers, and Wind Down are ways to limit your overall dependency on superfluous apps, while Manage notifications and Do Not Disturb cover distraction reduction for the apps you can't give up. By reducing your interruptions via notifications, you can better keep your phone out of your hands. 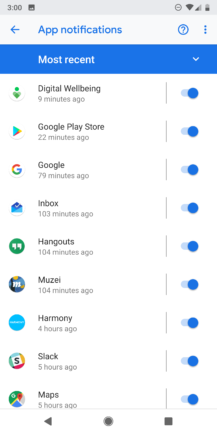 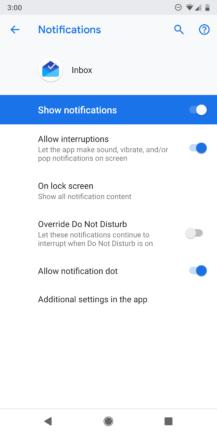 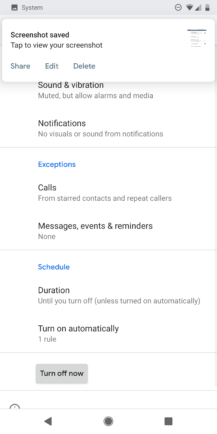 I'm not a family man, myself, but those with kids are sure to appreciate another way to improve that time spent with family. Our own Artem has to juggle his personal life and kids together with running a tech news site and APK Mirror, a bundle of responsibilities I don't envy. Undoubtedly, there must be times when he needs to disconnect—if not for his own sanity, then at least for his family's—and notification reduction is one way to accomplish that.

This combination of existing notification management tools, together with an increased awareness of the ways we use our phones via the new Dashboard can change our lives for the better, I'm sure of it. And with the new tools available in Digital Wellbeing, we can better act upon that productive impetus for self-improvement.

I'll be using Digital Wellbeing to impose plenty of limits on my life in the coming days, and while I'm not sure I'll ever reach the "JOMO" Google CEO Sundar Pichai described, I know that, with proper self-control, I can certainly strike a better work/life balance on my phone.

Latest Galaxy Note9 leak reveals almost everything about the phone