Today is the big day—after months of beta builds and speculation, Android 9 Pie is rolling out to Pixels (and at least one other phone). You don't need to wait for the Pixel OTA, though. Google is ready to go with OTA files and full system images for the 2016 and 2017 Pixel devices.

If you're using the standard Oreo build on your Pixel, you can grab the OTA file and sideload it. You won't need an unlocked bootloader, but you will need a computer with ADB running. This should not delete your data, but always make a backup just in case. However, the full system images will install over whatever you're running, and they do delete everything by default. This is a quick way to get from the beta to stable Android 9. You need an unlocked bootloader, though.

Google is really on the ball today. OTAs for Pixel devices have started rolling out. 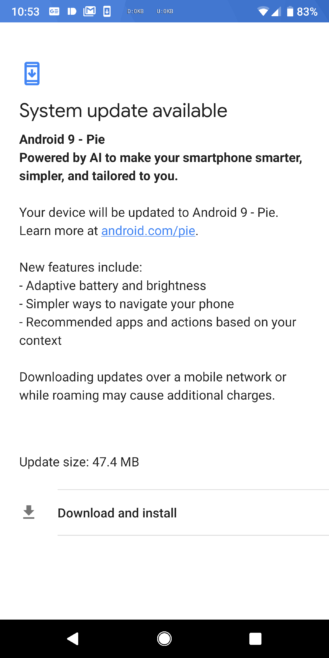 Google has posted Android and Pixel-specific security bulletins. On the Android side, August has two patch levels for August 1st and August 5th. It's rather light as far as bugs go, but there is a raft of closed-source Qualcomm patches. The Pixel bulletin lists mostly moderate threats, and there are no functional updates. Of course, this is also Pie day. So, there are plenty of Pie-related changes to enjoy.