We're pretty keen on Android news here, but some things outside our immediate purview are significant enough to be worth mentioning. Here's one: today, Apple became the first US company to surpass a total market capitalization of $1 trillion (trillion as in a thousand billions).

Market capitalization, or market cap, is the total combined value of all of a publicly traded company's outstanding shares. Apple's stock price climbed to a new high of $208.38 around 2 p.m., Eastern time today, pushing its market cap past that $1 trillion mark. It's since fallen slightly, but not enough to knock Apple back down into the billions. 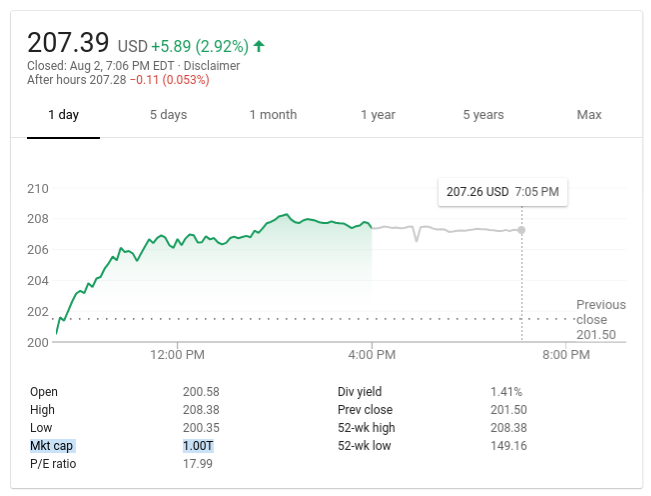 Apple isn't the first company in the world to hit a trillion-dollar market cap; Chinese oil and gas company PetroChina beat it to the punch by more than a decade. Still, it's a staggering sum — a trillion is equal to a million squared — and a first for a US-based company. It also firmly cements Apple's place as the most valuable publicly traded company today. Amazon's in second place, with a market cap of $884.86 billion, and good ol' Google (well, Alphabet, technically) is in third at $854.49 billion.