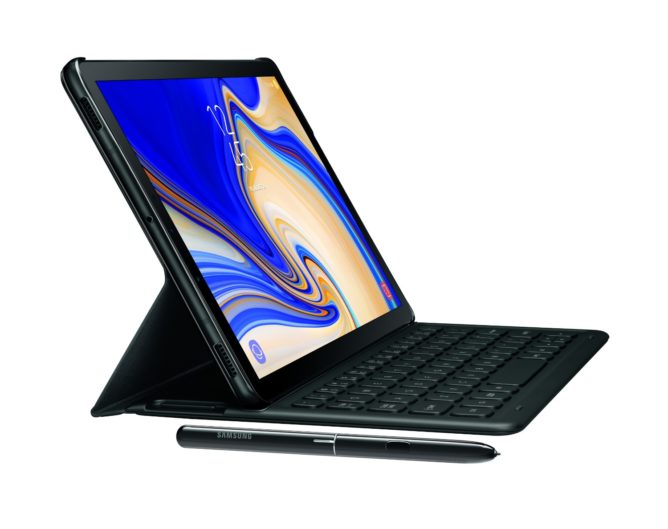 But let's get the basics hashed out here. The Tab S4 uses a 10.5" Super AMOLED display at 2560x1600 resolution, is powered by a Snapdragon 835 (yep, last year's chip) with 4GB of RAM, comes with either 64 or 256GB of storage, and packs a 7300mAh battery. You get USB-C fast charging, an included S Pen (with a fancy new design), and iris scanning for biometric authentication (no fingerprint scanner on this thing). Samsung will also be launching an LTE model of the Tab S4 through carriers, starting with Verizon - no pricing for that variant was announced, but Verizon will start selling it on August 10th. And, yes, the Tab S4 runs Oreo, just in time for Android P to launch later this month.

We've yet to go hands-on with the DeX desktop mode, so I'll reserve judgment on that functionality, but I have a strong suspicion that Samsung is making a product for a non-market here. Apple absolutely dominates the high-end tablet space, and the Tab S4 doesn't compare well against the current 10" iPad Pro (also $650), which features a much more powerful A10X Fusion chipset and - most importantly - offers a tablet app ecosystem that is miles ahead of Android's. Attempting to go toe-to-toe with Apple on a pro-level tablet running Android just isn't going to end well. Samsung can play the value card with the S Pen being included - the Apple Pencil costs a hundred bucks - but that sort of implies a false equivalency of function. The fact is that while you do pay a lot for it, you can actually do stuff with the Apple Pencil (and by relation, the Surface Pen) in apps for creative professionals that Android doesn't have and likely will never get. The S Pen is basically a toy given Android's tablet app situation, and there's nothing here to indicate that's changing.

For a small and dedicated subset of people looking for a "high-end" Android tablet, the Tab S4 could make sense - once it inevitably goes on sale for Black Friday this November. Given the dated chipset and Android's sad tablet app situation, paying $650 for the Tab S4 is probably only a good idea if price really is no object for you, and I just don't think that applies to many folks.

Starting August 10th, you'll be able to purchase the Tab S4 from Amazon, Best Buy, and Samsung's website for the aforementioned $649. If you buy it before September 8th, you'll also be able to get the normally-$150 keyboard cover for just $75. You can learn more in the official press release here.

[Update: Winners] We're giving away six VAVA Dashcams, plus 26% off coupons for everyone else ...