HTC isn't doing particularly well these days, and the few people out there who purchased a U12+ likely weren't too pleased with the last bit of news about their devices announced: 'CryptoKitties.' Luckily, HTC is releasing an update for the U12+, starting with the Taiwanese dual-SIM model and coming soon to US and European versions.

This information comes courtesy of Jeff Gordon (no, not that Jeff Gordon), HTC's head of global PR. 1.21.709.3 is rolling out to Taiwanese dual-SIM models and comes with "smooth auto zoom in video recording," the June security patch, as well as improvements to the buttons and Edge Sense. A demonstration of the auto zoom can be seen below. Owners also report that the pressure-sensitive buttons' responsiveness has improved, and that the edge double-tap gesture is now more accurate.

The update weighs in at around 422MB. U12+ owners in North America, Europe, and other regions can expect to see this update in the coming weeks, albeit with a slightly different software version number.

Just as promised, the U12+ update is now starting to land on phones in the US. As we were warned, the version number is slightly different, but the attached changelog makes it clear that we're looking at the same fixes and improvements that came to Taiwan earlier this month. Be on the lookout for your update notification as this release spreads to more and more handsets. 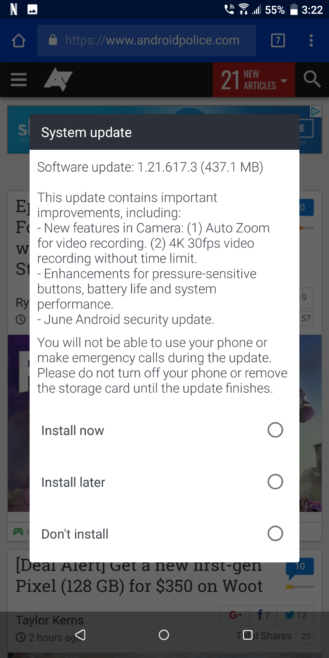 How to cancel your MoviePass subscription, because now you’ll probably want to