Facebook just experienced the largest one-day loss in market value in the history of the United States, thanks to new GDPR regulations and the recent Cambridge Analytica scandal. Twitter isn't doing great either, as the company's stock dropped 21% following the quarterly earnings report.

Twitter actually reported a profit for the third consecutive quarter, with $100 million in net income. However, the company is facing the same slow user growth that is plaguing Facebook. Twitter now has 335 million monthly active users, compared to the 336 million it had in Q1.

The company says a combination of dropping some SMS carrier relationships and "prioritizing the health of the platform" were responsible for the drop in users. Twitter did suspend around 70 million accounts in May and June, but they did not affect the monthly active user account, since they were inactive for 30 days or more. The company's recent locked account purge also didn't affect the user count, since that happened after Q2 ended. 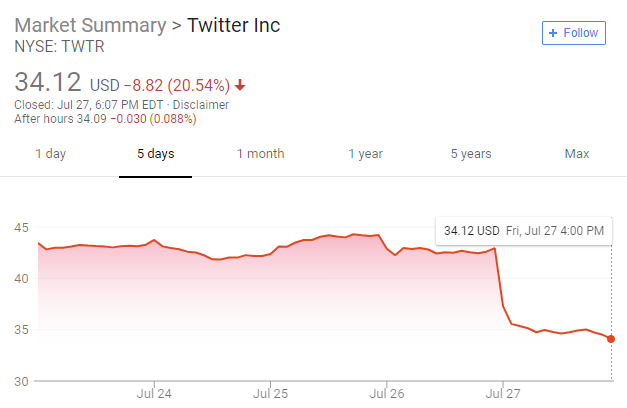 Twitter's stock dropped more than Facebook's, but Twitter has a significantly lower market cap than Facebook, so the impact was far less extreme. The company's stock was valued at $42.94 before the Q2 results, and it currently sits at $34.12.