Unfortunately, we weren't able to examine the performance of Navigation for Google Maps Go on an actual Android Go device. I spent a good ten minutes trying to get the app to install on my Alcatel 1X, and gave up when it had yet to complete after all that time. Thankfully, it works just fine on non-Go hardware. (When it does finally finish installing, if I notice any differences in behavior compared to Maps Go on a non-Go phone, I'll update our coverage.) For more about my adventures in Android Go-related jank, feel free to check out that time I spent a month using it. 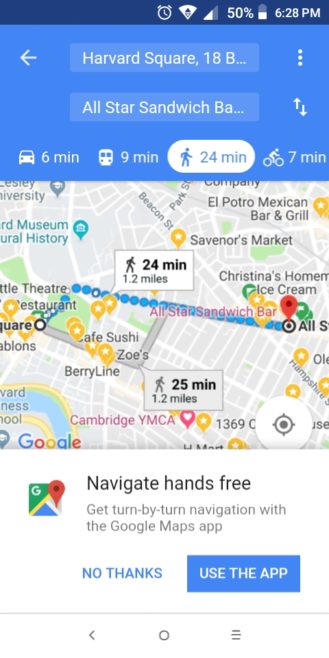 Maps Go would previously lead you to the full Google Maps app (left), but now it points you at the new Navigation for Google Maps Go app (right).

The app only just appeared on the Play Store, and at a mere 12.15MB in size, it certainly fits Android Go's space and data-saving goal. Now if you fire up Maps Go and request directions, instead of pointing you to use the full version of Google Maps as it once did, it will place you at the Play Store listing for Navigation for Google Maps Go (or just drop you into the app, if it's installed).

The lengthy-titled app—which could only have ever been named by the same group that bought you Android Oreo (Go Edition)—should be familiar to those that use Google Maps' navigation mode. In fact, it looks basically identical, and that's excellent. I haven't had a chance to pile into my car to test it out, but from a quick walk around, it seems to behave almost identically, too. 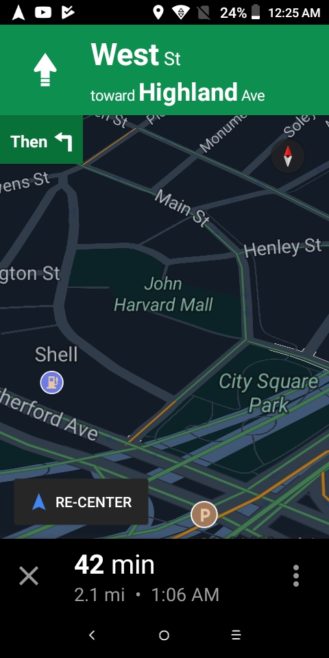 You get the same angled view and turn-by-turn navigation that the full version of Maps provides in its navigation mode. Performance is snappy, even on mediocre hardware, with no lag or dropped frames. It can also show traffic, if you enable the option. Like the full version, you're a little arrow following a blue path at an angle behind yourself on the map.

Which witch is which? Full Maps navigation (left), and Navigation for Google Maps Go (right).

By far one of the biggest problems I ran into using Android Go full-time was the lack of navigation support in the Maps Go app. Navigating is a fundamental feature for a phone in 2018, period. I don't drive a lot, but when I do, I drive in Boston. Not having a good interface for navigation and being forced into using the full Maps app—which lags hardcore on Go-level hardware—made for a whole lot more distraction on the city's already dangerously confusing streets.

Based on what I can tell, Navigation for Google Maps Go fixes one of my most vocal complaints on the subject of Android Go's software. Interested parties can pull down the app and try it out themselves on even non-Go hardware, too. All you need to do is install Google Maps Go (also available at APK Mirror) and then install the new navigation app (itself also available on APK Mirror). 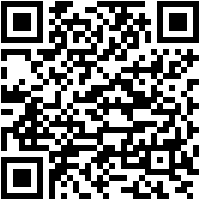 Google Go to soon get webpage dictation in 28 languages