Facebook has been an omnipresent part of American news for what seems like all of 2018, and rarely with a positive connotation. Based on the company's recent second-quarter financials, Facebook has a more conservative outlook on the future, expecting revenue growth to decline in the coming years. The company is quick to externalize blame for this, pinning its expectations for the decrease on currency markets projections and pesky privacy-enhancing regulations like GDPR.

In an understandable development at the announcement, Facebook's stock has taken a tremendous nosedive, down nearly 20% at peak. 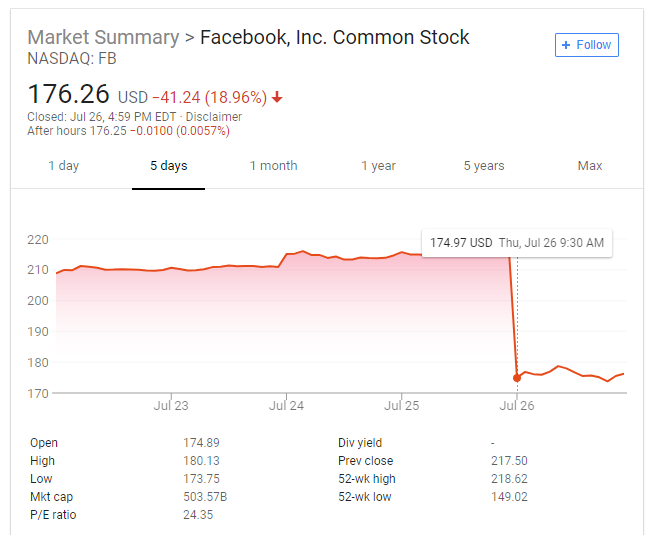 It can be tough to predict exactly how markets will react to these financial results. For example, Google was able to wow investors this quarter even though the recent EU fine destroyed operating margins, dropping them from 24% to 9% for Q2 2018. Turns out, the future matters more than the present when it comes to investor attitudes these days, and Google beat the crap out of analyst expectations excluding the fine, pointing to a stronger than expected outlook.

Mark Zuckerberg's net worth tumbles nearly $20 billion as Facebook shares fall, knocking him down 4 spots on the list of the world's richest people - Forbes

Facebook's grim forecast predicts that margins will be much lower for the next few years due to "more choices around data privacy" as well as currency market predictions and the GDPR, according to a statement made by Facebook CFO David Wehener during the earnings call. The real reasons are likely much more complicated than that simple survey, and the immensely public problems the platform has faced, including the Cambridge Analytica saga, are sure to be contributing factors.

It's official: Facebook posts largest one-day loss in market value by ANY company in the HISTORY of the United States stock market https://t.co/nKId0gFHqT

Mark Zuckerberg did his best in the earnings call to try to spin this decline as something positive for investors—as if making less money was an active choice the company was pursuing to benefit consumers, rather than a side-effect of everything it's being forced to do in the face of growing public concerns.

Looking ahead, we will continue to invest heavily in security and privacy because we have a responsibility to keep people safe. But as I've said on past calls, we’re investing so much in security that it will significantly impact our profitability. We’re starting to see that this quarter. But in addition to this we also have a responsibility to keep building services that bring people closer together in new ways as well. In light of increased investment in security, we could choose to decrease our investment in new product areas, but we're not going to -- because that wouldn't be the right way to serve our community and because we run this company for the long term, not for the next quarter.

Declining user growth, growing privacy awareness, and dwindling advertising profitability all seem to indicate trouble for the company in the future. Even so, if Facebook is legitimately investing the time and money in improving privacy at the cost of slowed growth, it should all be to consumer benefit in the end.

This is such a weird framing. Like the last 3-6 mos have been reporters screaming about it to take more civic, public accountability (which I support). So maybe the headline should be that it’s OK with taking a $142B hit to resolve really serious, long-term structural issues. https://t.co/NyXqJ6CIRT

Although it did its best to downplay the stormy financial forecast, Facebook's investors don't seem to be distracted.