The pace of Android P Developer Previews marches on, and DP5 was just pushed out into the world. This marks what should be the final release candidate developer preview for Android P before its release later in Q3 of this year. Developers and enthusiasts alike should make sure they're prepared for the changes in store.

As a release candidate, DP5/Beta 4 contains all the final APIs and system behaviors developers can depend upon for testing apps, so if you're the app-making sort and you've been holding off testing API level 28 compatibility for your creations, now's the time to do it. Developer documentation for Android P testing is available at Google's Android Developers site.

Note, DP5 is the last predicted Developer Preview until the final release in Q3.

Release notes for the fifth Developer Preview are light, with no advisories posted relative to stability or performance problems, as was the case with DP4. Sounds like Google considers DP5 to be release-ready, barring any unforeseen circumstances.

OTA images (above) and full factory images (below)

OTA images and factory images for Pixel and Pixel 2 devices are live, and they're the only way to install the update until the OTA is deployed. At the time of writing, that OTA doesn't appear to have started rolling out just yet, but there is typically a small delay between OTA images being posted and the rollout.

Google's hardware partners like Essential and Nokia that have also been joining in on the Developer Preview fun should have their updates for DP5/Beta 4 landing over the coming weeks, according to the DP5 announcement blog post.

If you do manually flash to the latest build, it could be in your interest to do a clean flash to rule out any problems. We ran into a few issues with previous migrations, such as between DP1 to DP2. YMMV, as always, but since DP5 is supposed to be pretty stable (given the release notes), it might be worth a wipe. 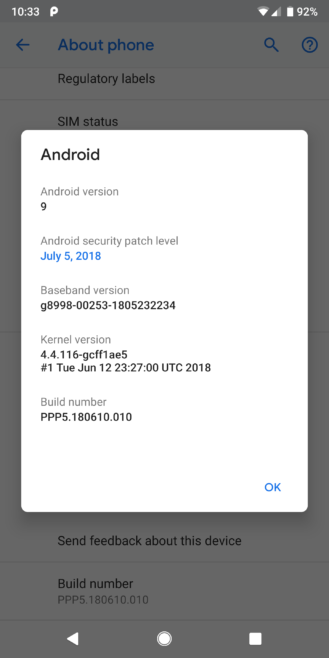 Check out Google's Android Developers Blog for more details on what to expect from this final Android P release, and we'll be keeping an eye out for any new features that might appear.

Based on recent tips as well as our own enthusiastic tapping of that "check for update" button, we can confirm that the OTA for DP5/Beta 4 is now rolling out. If you don't quite fancy yourself comfortable with sideloading with command-line level tools, you don't have to. 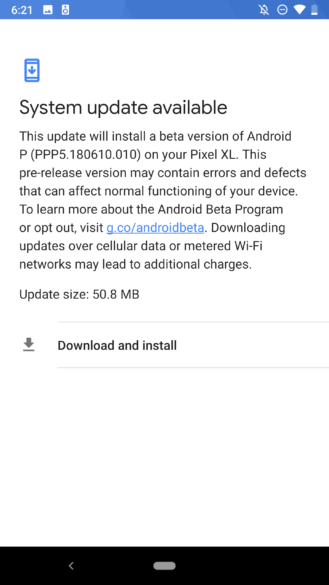