The Android One program has been somewhat revitalized in the last year or so, with HMD Global, in particular, releasing a number of Nokia branded phones with the purest form of Android. Xiaomi's Mi A1 led the way, however, launching with impressive specs for a phone costing just $230.

Not content with simply announcing one follow-up to its budget champion, the Chinese OEM is back with two new phones: the Mi A2 and the Mi A2 Lite. Both devices will get the two years of guaranteed platform updates and regular security patches that make Android One phones so attractive.

Ahead of the teaser for today's announcement, rumors had suggested that the Mi A2 would be based on the Xiaomi Mi 6X that came out in April. That appears to be exactly the case, with both phones sporting a 5.99" FHD+ IPS LCD display with a Qualcomm Snapdragon 660 SoC and a 3,010mAh battery. The same 12MP and 20MP dual rear camera setup is also present on the Mi A2, as well as the 20MP front snapper.

If there's one noticeable difference from the Mi 6X, it's that there's an extra storage option at 32GB. You can still get the 64GB or 128GB versions, and the 4 or 6GB RAM options are also the same. As Xiaomi points out, there are improvements across the board compared with the Mi A1 (see below image). The metal unibody construction and impressive spec sheet (for the price) are carried over from its predecessor. 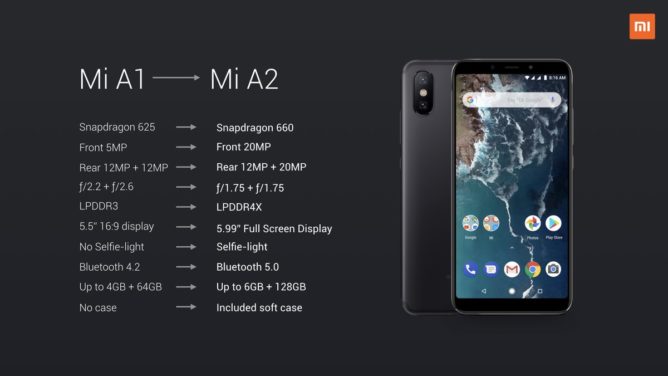 It may come as some surprise to see another even cheaper Android One device from Xiaomi, but the extra choice is never unwelcome. The specs of the Mi A2 Lite are more similar to last year's Mi A1, with the same Snapdragon 625 chip and smaller storage/memory options. 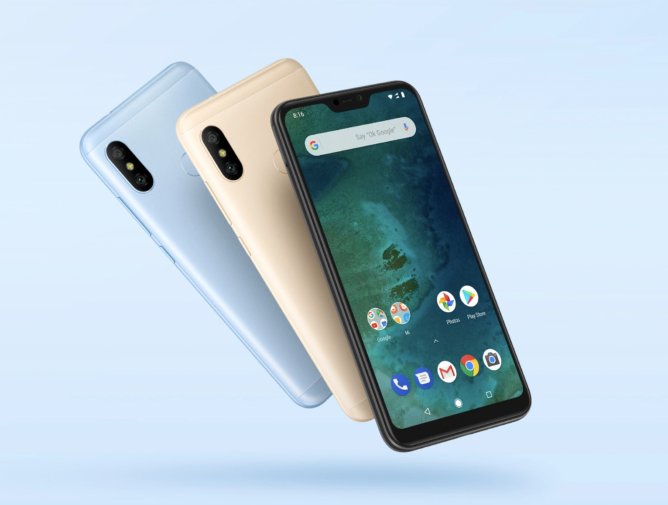 The screen is slightly smaller than on the regular Mi A2 at 5.84", and the second rear and front cameras are only 5MP. It does have a larger 4,000mAh battery, but you sadly have to deal with Micro USB for charging, which is also slower than on the Mi A2.