Today, the Theta Plug-in Store went live with a total of eight applications to improve the camera. Three of those come from Ricoh itself, and they are File Cloud Upload, Wireless Live Streaming, and Automatic Face Blur BETA — the names are fairly self-explanatory. Five more plug-ins are available from third-party partners, listed below: 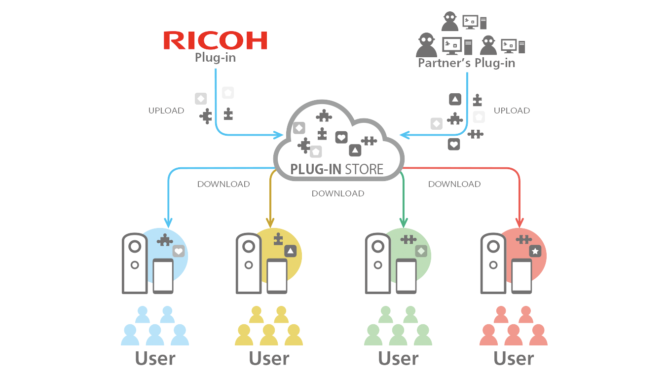 There are already some compelling options for expanding the usability of your Theta V camera, but Ricoh also promises that more are on the way, both from the company itself and other third-parties. If you want to see what else is coming up, check out the roadmap for future plug-ins that Ricoh has shared, including time-lapse shooting. In the meantime, if you have a Theta V, check out what's already available in the Plug-in Store.

RICOH THETA Plug-in Store Goes Live
RICOH THETA V owners can now “customize” their 360-degree camera with new functionality via downloadable plug-ins from new online marketplace
TOKYO, July 23, 2018 – Ricoh today announced the RICOH THETA Plug-in Store has gone live. The new, online marketplace makes available downloadable software plug-ins that provide new functionality for the RICOH THETA V fully spherical camera, such as wireless live streaming, remote camera control, automatic image uploads and much more. Starting today, plug-ins created by Ricoh and such organizations as Sony, NTT DOCOMO and HoloBuilder can be downloaded from the site.
The plug-ins are being created by members of the RICOH THETA Plug-in Partner Program, which allows third-party developers to create their own Android™-based software plug-ins for the RICOH THETA V, a camera capable of capturing fully-spherical 4K-equivalent video and high-resolution still images. Based on the open-architecture Android operating system, the RICOH THETA V is unique among 360-degree imaging cameras in that its functionality can be further expanded by installing plug-ins.
“The new THETA Plug-in Store helps us serve our customers with technology solutions that directly impact their bottom line,” said Mostafa Akbari, CEO of HoloBuilder, which joined the Plug-in Partner Program to build innovative, secure and user-friendly applications for the construction industry. “We are thrilled that Ricoh is providing this flexible, customizable system for developers to get 360-degree technology solutions out quickly and proud to announce our first RICOH THETA Plug-in: HoloBuilder 360 SiteStream. This is the world’s first 360-degree livestreaming application that helps general contractors and owners monitor construction site progress from a first-person perspective, in real time.”
Ricoh kicked-off the RICOH THETA Plug-in Partner Program last month, with a website that provides easy access to tools and online support. Since then, many developers have joined the program, and five third-party plug-ins are currently available from the store. Three new plug-ins developed by Ricoh are also available.
Ricoh intends to continue to add capabilities to the development environment to meet the needs of consumers and businesses.
<New Plug-ins created by third-party developers>
1.    Device WebAPI Plug-in
Developer:
NTT DOCOMO, INC. (Development framework provider) (https://www.nttdocomo.co.jp/english/)
GClue, Inc. (Application developer) (www.gclue.com)
NTT DOCOMO has created new functionality for the existing WebAPI plug-in (developed by GGlue) that enables it to collect information from and control the function of the RICOH THETA V’s built-in sensor. The Device WebAPI Plug-in conforms to OMA GotAPI specifications, which builds a WebAPI on the RICOH THETA V device, and enables function access via a common WebAPI on other devices such as smartphones.

MESH is a platform of app-enabled smart triggers that can transform everyday objects into smart devices that can be controlled from a phone or tablet. The new MESH plugin for RICOH THETA enables direct control of the RICOH THETA V via a MESH block.

HoloBuilder's 360 SiteStream plug-in gives construction companies 24/7 access to view construction sites in 360° through livestreaming (Livestreaming duration depends on usage environment). Users can set up a RICOH THETA V in mission-critical locations on a construction site and then remotely zoom into the project from anywhere to see what is going on in real time. The plug-in allows adding an infinite number of 360-degree livestreams. The plug-in is part of HoloBuilder’s reality-capturing solution, which enables integration of livestreams into existing HoloBuilder projects to combine all visual site documentation.

<New Plug-ins from Ricoh>
1.       Wireless Live Streaming: allows for wireless fully-spherical live-streaming on YouTubeTM
2.       Automatic Face Blur (Beta): provides facial recognition and enables faces to be blurred for privacy/security reasons
3.       File Cloud Upload: automatically uploads images saved on the RICOH THETA V to Google PhotosTM via a router
You can learn about the other plug-ins that Ricoh is planning to upload in this web page:
http://theta360.com/en/about/theta/v/roadmap.html
Android, YouTube, Google Cloud Storage, and Google Photos are registered trademark of Google Inc.
All other trademarks are the property of their respective owners.