In Disney's seemingly infinite pursuit to monetize its Marvel license on mobile, we have seen an ever-growing rise of free-to-play Marvel-based collection games hitting our digital shelves. Contest of Champions, Future Fight, Avengers Academy, Strike Force, and Puzzle Quest are your primary collection-based options to choose from, and hey, why wouldn't Marvel want to add one more to the growing pile? Yesterday Nexon and Marvel Entertainment debuted the first gameplay trailer for Marvel Battle Lines at San Diego Comic-Con, and guess what, it too is a collection game. What a surprise.

As you can see in the trailer linked above, the gameplay heavily revolves around collecting cards that feature your favorite Marvel heroes and villains. Your deck will consist of twelve cards, and your goal is to strategically place them in consecutive order on a 3x4 grid to create powerful battle lines and combinations that will damage your opponent.

There is a single-player campaign included for those of you who prefer to play solo, and it contains an original story written by Marvel writer Alex Irvine. Oh, and if you are looking for online play, that's included too. There's a PvP mode that plays out in real time, and you can jump in at the very beginning of the game without any need to unlock the feature first.

You can pre-register for Marvel Battle Lines on both the Play Store and the official website, though the website may be the better choice since registering there will net you an exclusive 4-star Doctor Strange card, 5,000 in-game gold, and further news about the game's development delivered right to your email. No official release date has been given yet. All we know right now is that it's supposed to officially land sometime in 2018. If you happen to live in Singapore, Australia, Malaysia, Indonesia, or the Philippines, the title should already be available for download since it was recently soft-launched in those regions, but the rest of us will have to continue to wait. Of course, if you are really impatient, you could always track down the APK and sideload it. 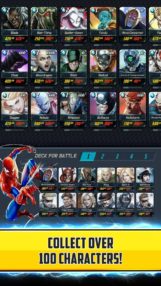 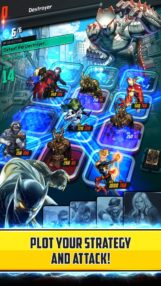 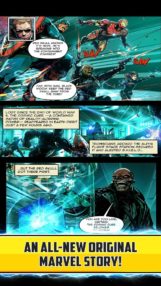 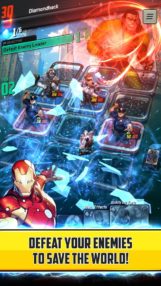 So there you have it. Nexon is going to release the next free-to-play Marvel game on Android, and just like every other Marvel title on our platform, you will be tasked once again with collecting your favorite heroes and villains. I can't say I'm all that excited for Marvel Battle Lines since there are already so many similar options available. Sure, the beloved property and flashy graphics are probably enough of a draw for most fans, but for those of us who have been there and done that, more of the same is hardly what we are looking for.

Today at Comic-Con International: San Diego, Nexon and Marvel Entertainment debuted the first gameplay trailer for MARVEL Battle Lines, a new strategic card battle game featuring hundreds of iconic Marvel Super Heroes and Super Villains. MARVEL Battle Lines will be released in 2018 as a free-to-download experience on the App Store® for iPhone and iPad and on Google Play for Android devices.

A player’s deck in MARVEL Battle Lines is made up of 12 cards from a roster of hundreds of iconic Marvel Super Heroes and Super Villains as well as powerful abilities that can be used in a match. The goal of a match is to strategically place cards in consecutive order on the 3x4 grid that makes up the field of play to create powerful battle lines and combinations that will damage their opponent’s health meter. Players will begin each turn with four cards in their hand and have the ability to swap their cards, play an action card or end their turn by either placing a character card in the field of play or moving a card already deployed to an adjacent tile to attack an opponent’s card. The first player to bring their opponent’s health meter to zero using combinations of battle lines with their deck of characters - three across, three adjacent, four down, an L-shape, etc. - will win the match.

In MARVEL Battle Lines, players collect and build the ultimate deck of Super Heroes and Super Villains to take into battle across an expansive single-player campaign with an original story written by Marvel writer Alex Irvine and a real-time turn-based competitive player vs. player (PvP) mode. MARVEL Battle Lines’ intuitive gameplay allows players to battle in single player and be competitive in PvP from the beginning. Collecting cards from each battle in the single player or PvP modes, players can build diverse decks of powerful Super Heroes and Super Villains, mastering their strategies to take on greater challenges and compete with the best in PvP. In addition to a campaign with an original story from Marvel writer Alex Irvine, an array of single-player activities will revisit beloved Marvel storylines and events and continue to challenge and reward players.

Fans of MARVEL Battle Lines can pre-register at www.marvelbattlelines.com to receive an exclusive Doctor Strange Super Hero card and 5,000 in-game gold. For more information and to stay up to date on the latest news, Super Hero and Super Villain card reveal following the game on Facebook and Twitter.