Motorola's G-series phones generally provide a pretty great bang for your buck. The recent G6 is no exception, and Verizon has it for a very appealing price — if you're looking to open a new line of service. In that case, the G6 is just five bucks a month, coming to $120 over two years, interest-free.

This deal has been going on for a few weeks now, and Verizon hasn't said when it's set to end. In his review, Ryan said that while the G6 doesn't quite reach the G series' high water mark for value, it's still a very nice budget option. The new line requirement makes this a smart choice for a kid's first smartphone. At just $5 a month, it's practically free. 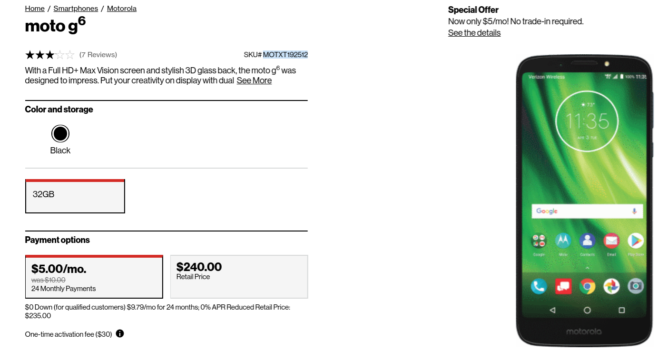 You might notice that Verizon's listing for the Moto G6 conflates a lot of details with the Moto G6 Play — it has photos and assorted specs of both devices. We checked, though, and the SKU listed (MOTXT192512) is indeed for the (better) G6.

The Nokia 6.1 Plus is the China-exclusive X6 with Android One