For a while now, App Annie has been offering its metrics to interested parties so developers can better understand their place in the app economy. Careful examination and integration of data like this, paired with the knowledge of a target audience, can influence where a developer's time can be best spent. And according to App Annie's latest report, Play Store downloads are up significantly, with a 20% rise year-over-year, and 160% higher than Apple's Play Store. On the other hand, consumer spending is still 80% higher on iOS. 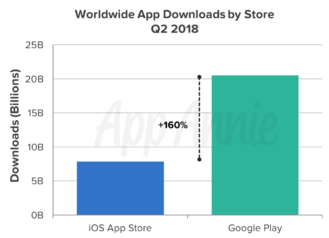 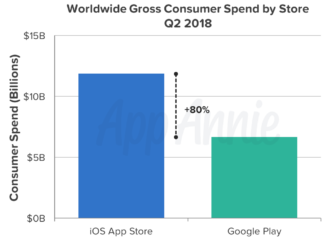 India and Indonesia were two big drivers for growth on the Play Store, which is understandable given the increased attention Google has been paying to those markets. Consumer spending is still higher in Apple's marketplace, but the gap is slowly closing. Last quarter the App Store exceeded Play Store gross spending by 85%.

Not all of the metrics are purely Apple vs. Android, though. With growth up functionally across the board, it's also worth paying attention to which types of apps are doing well. On the Play Store, the increase was primarily driven by games, video players & editors, and sports apps. For the latter, overall engagement time and consumer spending are also up—likely in no small part due to the World Cup—with some markets seeing a 65% rise in sports app use compared to the three weeks before the event. 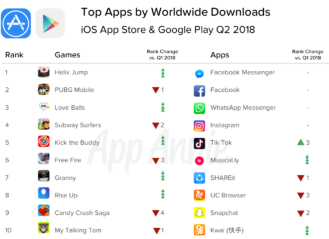 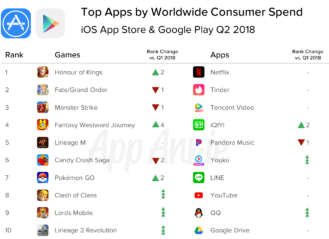 Top apps across both markets by downloads and spending. Click for more details.

By market share, the three largest regions for the Play Store are South Korea, the US, and Germany, while iOS' biggest players were the US, Taiwan, and the UK. Top charts for both marketplaces are an interesting mix of volatility and stability, with app rankings staying mostly constant and game rankings changing more drastically. Apps in each category are still mostly what you'd expect, though, with big names like Facebook, Netflix, and popular mobile games like PUBG and Candy Crush holding their footing. Plenty of new arrivals are reaching the top games lists in both paid and free categories for the first time, though.

For the full details, check out App Annie's report in full. It's a good read if you're big into market stats and numbers.

[Update: Slight delay, ready now] You're not being phished—Google is rolling out a new ...