T-Mobile was the first US carrier to really push the idea of free international roaming, although the data speeds have always been terrible. Still, your T-Mobile phone works in other countries, which is more than you could say a few years ago. Now, Tmo has expanded free roaming to even more countries, and there's a cheaper option if you want LTE data while traveling the world.

Before this announcement, T-Mobile offered free international roaming in 140 countries around the world. That means as much 2G data as you can use (not much) and free SMS. Calls are billed per minute but at lower rates in supported countries. Now, that same deal has been extended to a total of 210 countries. T-Mobile hasn't listed the new additions yet, but they'll be on the Simple Global site when the change goes into effect on July 22nd. 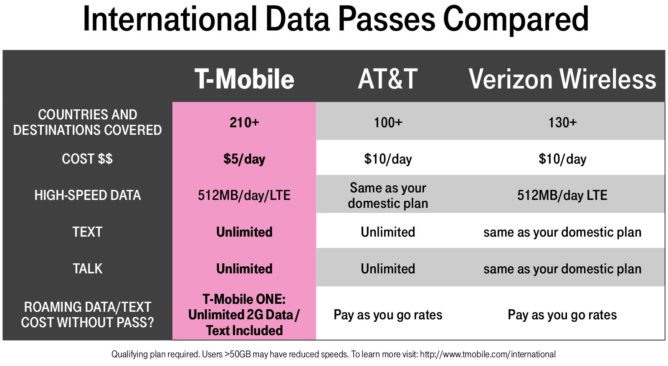 T-Mobile's international data passes are getting a price drop as well. You can now pay just $5 per day for LTE service in supported countries. That comes with 512MB of LTE, after which you back down to 2G speeds. Day passes also include unlimited calls and SMS. You can purchase up to two day passes in a single 24 hour period if you need more data. The new data passes are available starting August 1st.