Updates to the Google app have been rolling out at a faster rate for a little while now, and each brings fewer and fewer overall changes. The latest update has remarkably few changes or additions, but it has shed a lot of old and unused text, which isn't a bad thing. However, one of the additions speaks to one other thing that might be going away soon: the Google Feed widget.

Feed widget to be replaced by At-A-Glance 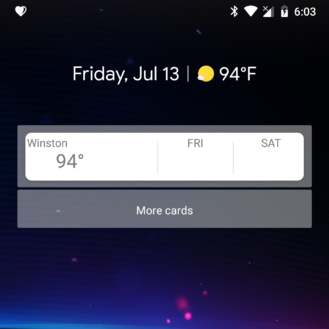 A pair of new lines were added that spell the likely end of the Feed widget. Neither line explicitly names the Feed widget, but they explain a widget won't be available soon, and that if you want to see weather, calendar, and other updates, you should replace it with the At-A-Glance widget. It really only makes sense that this is about the Feed widget itself.

The Feed widget probably won't be missed by many. It has looked pretty outdated as Google's design language has evolved beyond the original Material look, and as the screenshot above shows, it may even be broken now. Only the current temperature shows up, and it looks like a few things aren't aligned properly. (At least that's what it's doing on all of my phones.)

It's not clear if this will have any impact on the full Google Feed screen, but seeing as it has only had relatively minor cosmetic changes over the last year, this might be a sign of things to come. The Feed has been progressively buried deeper in the interface, and with Google News taking over much of the same role, this might be the first step in moving users away. Of course, this is just speculation.