I think we can all agree at this point that the term "unlimited" has become utterly meaningless in the context of phone plans. Most unlimited plans include at least a few odd limits, but Sprint's latest offerings are really impressive in how many limits they apply to "unlimited" service. The old Unlimited Freedom plan will soon be replaced by Unlimited Basic and Unlimited Plus.

Here's a quick breakdown of what the two plans offer. 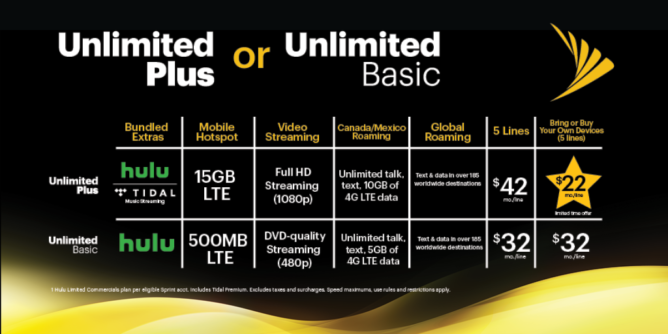 The basic plan has unlimited on-device LTE, but your mobile hotspot is limited to 500MB at LTE speeds. Video streaming also tops out at 480p. Music is limited to 500Kbps, and games only get 2Mbps of bandwidth. These plans run $32 per line (5 or more lines) and include a basic Hulu account. Single lines are $60.

Unlimited Plus has less stringent limits, but they're still present. You get 15GB of LTE hotspot, and video streaming tops out at 1080p. Music streams are capped at 1.5Mbps and games are still 2Mbps. This option costs $42 per line of just $22 per line (5 or more lines) for a limited time if you bring your own device or buy one full price. Single lines are $70. This account includes Hulu and Tidal music streaming.

Sprint will begin offering these plans tomorrow, July 13th. You can also get your activation fees waived through the end of the month on these plans. Sprint will even throw in a free iPad with new lines this weekend (details on this are light). It's possible none of this will matter in the near future if the T-Mobile merger goes through. Sprint customers will probably end up on Tmo plans.